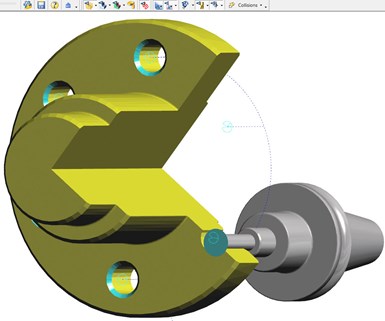 Many of the productivity increases in Edgecam 2021 from Hexagon Production Software are a result of improved parallel processing capability and multi-threading algorithms. The high-speed waveform roughing strategy is now faster when generating tool paths for both solid and wireframe components, the company says. The profiling cycle’s Undercut function can generate tool paths between 40 and 60% faster, depending on part size and complexity. Additionally, improvements to the software’s architecture reduce the time it takes to check tool paths with Machine Simulator when the software is initially launched.

Eight new cycles deliver support for programming on-machine probing. The cycles’ NC output can be configured to support Hexagon’s existing m&h probing macros as well as other popular probing systems for different controls and native probing languages for Siemens and Heidenhain controls. Six new or updated commands have been introduced into the inspection operation, including one to globally edit existing features and another to control the layout of both linear and rectangular array features.

The Cut by Region option deploys a more even tool path, completing each segment of a component before moving on to another region. The Outside To In strategy reduces cycle times by maintaining closer cutter contact, whereas previously a face mill would take longer in Climb or Conventional mode to move left to right in readiness for the feed movement.