Index’s next-generation MS32-6 six-spindle automatic lathe is designed to bring the benefits of multi-spindle technology to a broader range of applications. 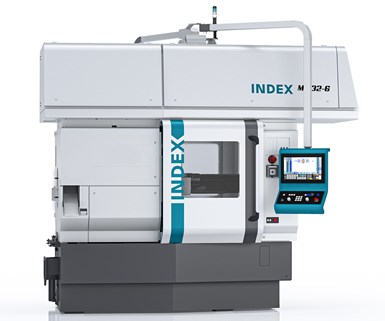 Index’s next-generation MS32-6 six-spindle automatic lathe is designed to bring the benefits of multi-spindle technology to a broader range of applications with a flexible tool slide platform that reduces changeover times. Accommodating barstock ranging to 32 mm in diameter, the lathe can handle a variety of complex parts thanks to 12 cross slides, including two V-shaped, X- and Z-axis cross slides at each spindle position. C and Y axes, together with live tools, can also be implemented to enable a range of machining processes, including off-center drilling, threading, contouring, hobbing and polygonal turning. All of the slides can be alternatively configured for grooving or drilling.

Each cross slide incorporates Index’s W-serration locating system that provides micron-accurate toolholder alignment. Coupled with a quick-clamping device, tools can be set up off the machine and then quickly installed to reduce tool change times, according to the company. The machine incorporates the same W-serration system on its live units for drilling, milling and polygonal turning. Presetting tooling for these operations off the machine also reduces setup times.

The MS32-6 can apply twin turrets with rigid tools in as many as five spindle positions. These hydraulically controlled units can alternate between tools in less than half a second, the company says, enabling the efficient use of separate tools for roughing and finishing in the same position. The twin turrets can also incorporate duplicate tools to reduce the need for tool changes.

The fluid-cooled spindle drum features six spindles with speeds that are independently controlled to a maximum of 8,000 rpm. The machine can also be equipped with one or two synchronous spindles, each of which can apply up to six tools for machining the rear ends of parts.