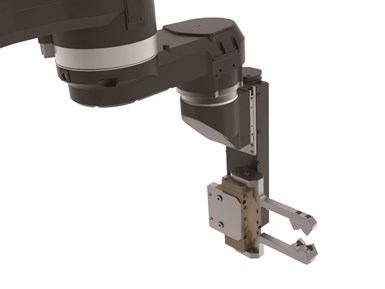 Okuma America’s Roid-series robots are designed specifically to integrate with the company’s own machine tools. Two models are available, both of which take direction from the company’s OSP control system to eliminate the need for separate automation programming.

The Armroid is built directly into the machine. This configuration enables automating such tasks as in-machine cleaning, chip removal, and chatter suppression (by stabilizing the workpiece) in addition to part handling. Robot pairing options include multi-tasking and turning equipment as well as mobile workpiece stockers that sit alongside machines.

The Standroid is a stand-alone robot arm designed for easy operation, tight spaces, and applications involving small or mid-sized lots of varied parts. The system comes standard with a pushcart workpiece stocker, with options for multi-piece stockers and air-blast station designed for the application. Wiring is included for easy installation.