Thread milling provides a high level of security thanks to the light cutting load generated when the tool breaks the chip in smaller pieces, preventing the chip from being jammed, which typically occurs during tapping. 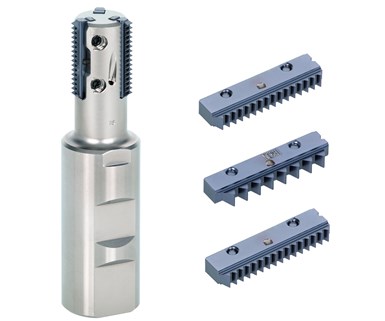 ETTL tools are made in diameters ranging from 17 mm to 30 mm with flute counts of two, three and five. The insert clamping screws are embedded in the tool body so the screws will not come loose when exchanging the inserts. Tungaloy says the clamping force of the insert screws are enhanced over that of the existing ETLN style, improving feed rates and cutting performance. The tool is compatible with CNC programs that are being used for the existing style.