VR goggles integrated with a camera give a legally blind young woman 20/20 vision and the chance to be a machine shop’s second-shift quality control lead.
#topshops

QC Tech Tia Bertz, who is legally blind, once needed to get very close to the part and probe when using Hastreiter Industries’ CMM. She no longer has to do that using the VR goggles with integrated camera.

A wealth of equipment can enable machine shop employees to do their jobs more effectively. For example, spindle touch probes can simplify setups, quick-change workholding devices can speed changeovers, automated processes can minimize burdensome tasks and so on. All of this technology is readily available to help shops maximize their overall return on employee investment while enabling employees to expand their shopfloor skillsets.

Marshfield, Wisconsin’s Hastreiter Industries, a family-owned shop and 2018 Top Shops winner, is home to a rather extreme example of this, one that has impacted a specific employee’s manufacturing career and her life in a significant way. What is it? It’s goggles with magnifying camera technology that gives Tia Bertz, a legally blind young woman who now works in the shop’s quality control department and supports the company’s IT and CAD needs, 20/20 vision.

Born in South Korea, Ms. Bertz has lived in Marshfield since she was adopted at 17 months old. Since birth, she has had optic nerve hypoplasia. Being a techie, she says this condition is akin to having a bad Ethernet cable between a good network client and server. Her eyes and brain function just fine, but the connection between them is faulty. 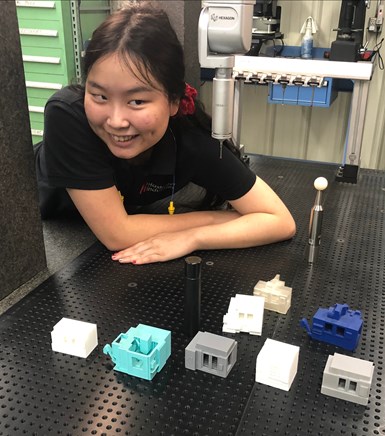 Ms. Bertz was introduced to 3D printing in high school. One of her hobbies is printing models of machining centers at home using her personal printer.

Ms. Bertz’s introduction to manufacturing occurred in high school. During her sophomore year at the Wisconsin School for the Blind and Visually Impaired in nearby Jamesville, the school purchased a MakerBot Replicator 2X plastics 3D printer. Intrigued, she took a class one semester that enabled her to experiment with the machine. Her interest in 3D printing was rekindled during her senior year when the school purchased a Lulzbot Taz 5 3D printer. This sparked her maker-mindset, and she began using basic Tinkercad CAD software to design and print various projects. She also read the printer’s operating manual just for fun. Ms. Bertz eventually became the school’s 3D printing instructor and purchased her own Taz 5 for use at home. There, she performed side jobs such as printing tactile astronomy projects for the Yerkes Observatory in Williams Bay to offer to visitors with visual impairments. 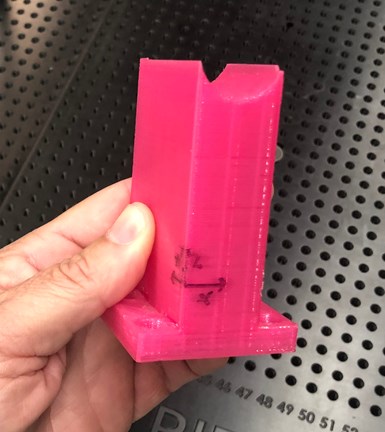 On a few occasions, Hastreiter Industries has contracted Ms. Bertz to create plastic items for use in the shop, such as this mount to support a part for CMM inspection.

Rather than let her disability define her, Ms. Bertz continued to seek opportunities to leverage her growing skill. “I could have spent the rest of my life in my basement simply 3D printing models,” she says, “but why? I’d much rather inspire those with disabilities such as mine to make significant contributions to society, too.”

In fact, a couple years ago, an opportunity presented itself for Ms. Bertz to do just that when she met members of the Hastreiter family through church.

Formerly known as UTM Inc., Hastreiter Industries was founded in 1988 by Ken and Sondra Hastreiter. Kylan, their son and company vice president, says they were impressed with Ms. Bertz’s talents and smarts. At the time, she was attending Northcentral Technical College in pursuit of her CAD technician associate degree. Believing she could be a valuable member of their team, they sought to identify a role for her while determining what tools she’d need to effectively perform her duties given her visual impairment. The first step was inviting her to visit their shop.

Kylan Hastreiter says one of the first things they did was walk with Ms. Bertz through the shop so she could describe specifically what she could see in the facility. (This was at the shop’s previous location also in Marshfield. In the fall of 2019, the company moved to its current 42,000-square-foot, environmentally controlled building.) The communicative walk-through helped identify potential safety issues. It also shed light on what tasks she would be able to perform and what assistive technology might be required to facilitate them.

After those initial discussions, the shop brought her on as an intern in August 2018. Early on, Ms. Bertz primarily performed CAD modeling. However, as a job shop, Hastreiter Industries offers only so much of that work. If she became a full-time employee, which was the goal, “what else would we be able to call upon her to do?” Mr. Hastreiter recalls wondering. ﻿Ms. Bertz expressed interest in metrology, so the shop considered what her role in its QC department might look like.

The timing of all this is intriguing. She was brought on as an intern one month before the International Manufacturing Technology Show (IMTS) in Chicago. Some of the Hastreiter Industries team was planning to attend, and they invited Ms. Bertz to join them toward the end of the show.

“While walking the show with Tia, we encountered a virtual reality, digital-twin demonstration and learned that she had never experienced VR,” Mr. Hastreiter says. “The demonstration included a virtual factory with assembly projects that those using the VR goggles could attempt in that environment.”

“I realized I could function better in a virtual environment than the real world.”

“I thought either I’d do really well in a virtual environment because of my experience with 3D CAD modeling, or I’d epically fail,” Ms. Bertz says. “I fumbled around during the assembly demo at first, but eventually got the hang of it. The person hosting the demo said I did better than many people with excellent vision. That’s when I realized I could function better in a virtual environment than the real world.”

The thought occurred to Mr. Hastreiter that if Ms. Bertz can see in a virtual environment presented very close to her eyes by way of goggles, why not have a camera present a feed of the real world to her in a similar way? Research showed that such technology already existed in the form of the E2 wearable electronic magnifier for low vision from NuEyes. The E2 is a pair of VR goggles integrated with a high-definition, auto-focus camera and software to enable zooming in and out, changing contrast and performing optical character recognition (OCR). The device has a 3K display (1,440- by 1,600-pixel screen resolution) and 101-degree field of view. 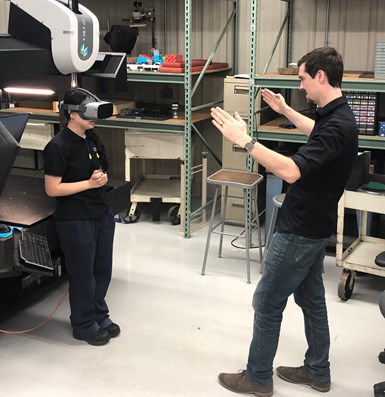 Depending on the magnification, the field of view using the E2 goggles can be narrow or fairly wide at 101 degrees. Mr. Hastreiter believes this might be the first time these goggles have been used in a manufacturing environment.

The shop, along with the Wisconsin Division of Vocational Rehabilitation (DVR) — a government agency that works with clients to determine what assistive technology is needed for school and work — set up an E2 demonstration for Ms. Bertz. This was through Adaptive Technologies Resources, a reseller of NuEyes products. At first, the goggles were disorienting, she says. But once she got the hang of it, she was seeing things that were either entirely new or that would have been impossible to see before without positioning her head a couple inches away from an object. “I was like, ‘Wait, I can read the sign at that far wall and see the ball on the CMM probe stylus without getting very close to it,’” she says. “I could also actually see cutting tools in our machines, which I couldn’t before.” In addition to the goggles, the Wisconsin Division of Vocational Rehabilitation helped provide digital hand gages for Ms. Bertz to use. She is not able to see the graduations on traditional Vernier devices.

Ms. Bertz explained to her DVR contact that to perform her QC duties at the shop, she would need the E2 goggles as well as digital hand gages. Gages with digital readouts were needed because she could not see the graduation markings on conventional Vernier devices. She also requested a touchscreen computer.

“We noticed that Tia needed to position herself right up against a computer screen to see it,” Mr. Hastreiter explains.  (The camera in the goggles doesn’t help when looking at a computer screen.) “But when you’re that close, how do you know where the mouse cursor is? Having a touchscreen eliminates the need to locate it.” Since installing touchscreen monitors, Ms. Bertz no longer has to find the mouse cursor when she is so close to the screen. The shop also modified the brackets holding the monitors to bring them closer to her.

Now with the goggles, the digital hand gages and the touchscreen computer, Ms. Bertz can independently perform part inspection duties and easily read complicated part prints with small text. She also measures parts using the shop’s vision system, which she says is ironic given her visual impairment. Hastreiter Industries hired her as a full-time employee in May 2019, and has started training her to program and operate its Hexagon 7.10.7 SF shopfloor CMM. Once that training is complete, the goal is to promote her to the second-shift QC department lead. “That’s perfect for me because I’m not a morning person,” Ms. Bertz jokes.

Last October, Hastreiter Industries was presented the state of Wisconsin’s Governor’s Office Exemplary Employer Award in recognition of its commitment to employment practices that encourage and facilitate the full participation of people like Ms. Bertz with disabilities. Patty Noland, director of Wisconsin’s Division of Vocational Rehab presented the award at the company’s new facility.

This experience has inspired Ms. Bertz to set a long-term goal of creating an ISO-like standard to help manufacturers safely accommodate employees with visual impairments. That way, they are not reinventing the wheel and won’t have to hire an expert in accessibility techniques and technology.

For now, though, she suggests that manufacturers considering hiring visually impaired people to do their homework relative to assistive technology currently available such as the E2 goggles. She also recommends contacting a state’s equivalent to DVR to determine what resources it has to assist a shop’s efforts. But Ms. Bertz says what’s most important is really getting to know the individual with the visual impairment. Open communication between shop management and the individual is paramount to a satisfying work experience and ensuring that person has the right tools to succeed and thrive.