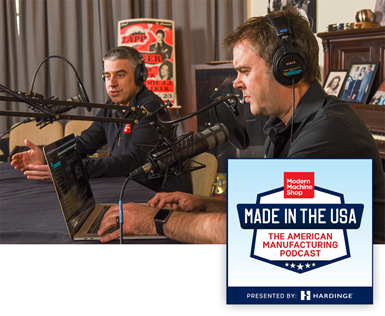 In the United States, nothing impacts our daily lives as profoundly yet more obscurely than the health of the American manufacturing sector. Just as U.S. manufacturing began to rebound from steep job losses in the early 2000s, the worldwide pandemic lifted a curtain on deep challenges related to trade policy, global supply chains, education, automation and our ability to produce skilled workers.

Modern Machine Shop’s “Made in the USA” is a six-part documentary series podcast that explores each of these topics through candid interviews with manufacturing leaders and world-class economists, shining a spotlight on the past, present and future of American manufacturing. Beginning March 16, 2021, new episodes of “Made in the USA” will drop every other week. Subscribe now on Apple Podcast, Google Podcast, Spotify or Soundcloud.

“Made in the USA” makes the case for American manufacturing by exploring where we’ve been, where we can go, and how we can choose the right path ahead.

Almost anyone who runs for a political office in the United States, especially at the national level, talks about American manufacturing during the campaign. More often than not, those speeches include the idea of bringing manufacturing back.

The idea of bringing manufacturing back is, of course, broadly appealing. The phrase itself reflects a time when nearly all of the things we use were made in the U.S.A. — and a belief that anyone with a strong work ethic could land a job at a machine shop or a factory, and get on the path to achieving the American dream.

But something happened 20 years ago that caused that path to narrow. Between the years 2000 and 2010, 33 percent of manufacturing workers lost their jobs — a rate of loss exceeding that of the Great Depression.

So why did this happen? And how realistic is it to talk about bringing back manufacturing — or to convince younger generations to step into the manufacturing jobs that baby boomers are leaving in droves?

As the pandemic raged throughout 2020, Modern Machine Shop’s Brent Donaldson and Peter Zelinski conducted dozens of interviews with sources from across the manufacturing spectrum. Through those interviews and their own research, Donaldson and Zelinski explored some of the biggest issues and ideas that shape our conversations about manufacturing today, including automation’s impact on manufacturing jobs, supply chain vulnerabilities that COVID-19 seemed to reveal, the retirement of the baby boomers from manufacturing, and what it means when we talk about bringing manufacturing back. 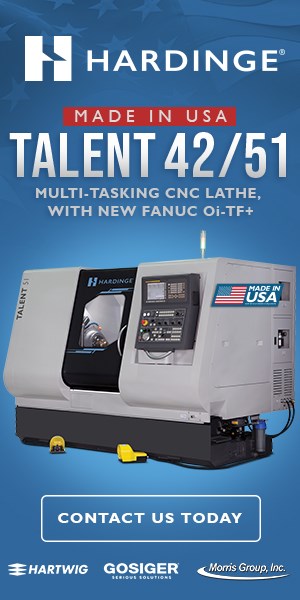 Brent Donaldson is senior editor for Modern Machine Shop and a contributing editor for Additive Manufacturing Media. Brent has created and hosted several podcasts, including podcast series for higher education and, weirdly, the “Notcast” series for Ripley’s Believe It or Not!

Peter Zelinski has been a writer and editor for Modern Machine Shop since 1997. His monthly column, “The Z Axis,” has been part of the magazine since 2000, and he became editor-in-chief in 2016 — only the sixth person to fill that role since the magazine’s debut in 1928.

Jenny Rush is the digital editor for Modern Machine Shop and its sister brand, Products Finishing. In additional to working on Made in the USA, she works on and cohosts Products Finishing's On the Line podcast.

Mike Budde, owner of Budde Precision Machining, shares his experience with buying a machine shop and what he’s learned in his two years of shop ownership.
#workforcedevelopment

There are many hard-won lessons that come from running a family-owned shop, here are a few favorites.
#successionplanning #viewfrommyshop

The transition into Swiss-type machining at Deking Screw Products required more than just a shift in production operations. It required a new mindset and a new way running the family-owned business. Hardest of all, it required that one generation let go, and allow a new one to step in.
#successionplanning

Authenticity and an open culture are companies’ best defenses against crises, and can help them emerge from crises stronger than when they started.
#workforcedevelopment #viewfrommyshop

When pen-and-paper methods of tracking job efficiency left AccuRounds’ engineers and managers in the dark, the shop switched to MachineMetrics. But machine monitoring brought morale challenges along with it.
#workforcedevelopment #casestudy

One way that shops can address the skills gap and the looming labor dilemma is to start making their own talent.
#workforcedevelopment #viewfrommyshop

The next generation of manufacturing employees have a solid work ethic and vast technical skills that provide value in the machine shop.
#workforcedevelopment #viewfrommyshop

A Sense of Purpose and Belonging: People Drive Company Growth