Every shop faces the same situation at one point or another: Their machine tools are either too large and slow to be competitive on smaller parts, or too small and underpowered for the larger parts. This was the case at Journeyman Machine and Supply Co. Inc. when shop supervisor Andy Hass and the company’s owners agreed that it was time to think small. 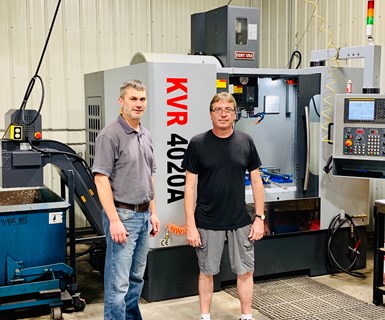 Shop Foreman Andy Hass (left) stands next to Jason Davies, president of Journeyman Machine and Supply Co. Behind them is a new Kent KVR 4020A vertical machining center.

“In the past, we’ve always traded in our old machines and replaced them with new ones of comparable size and capabilities,” Mr. Hass says. “This time, though, we felt it made more sense to invest in a smaller, faster machine. The rapid travels and tool changes on our large 50-taper machines were just way too slow for machining retainer plates, clips and various other parts with small tapped holes.” The company ultimately settled on a 40-taper machine from Kent USA that provided higher spindle speeds and through-spindle coolant supply.

Adapting to a Changing Customer Base

Journeyman Machine sits in a nondescript L-shaped building roughly two miles southwest of Lake Winnebago in Fond du Lac, Wisconsin. In 1976, founder Mike Lambeseder decided to open the small machine shop to serve the area’s railroad industry. He and a few others there made replacement parts, repaired equipment for local farmers, and gradually took on an increasing amount of production work until the day Mr. Lambeseder retired and sold the business to current owner and President Jason Davies. He and co-owner Ken Wagner have continued to build their business to its current 19-employee, 10,500-square-foot capacity, earning a reputation along the way as a “down-to-earth,” customer-oriented job shop offering quality and competitive prices.

But the company services an entirely new customer base today than it did more than 40 years ago. The production work has largely dried up, and Journeyman Machine produces an eclectic mix of prototype and low-volume part, fixture and other tooling jobs for the marine industry, machine tool builders, food and beverage customers, and custom machinery manufacturers. These include stainless steel bearing holders with 0.0005-inch tolerances, as well bracket holders with multiple pockets, angles and holes, the majority of which were bound for the new Kent machine.

Mr. Hass has been at the shop through most of these changes. He came on board in 1986, shortly after Journeyman Machine bought its first CNC machine tool, and notes that the company has evolved greatly since then. He’s watched as machinery riggers hauled the shop’s old Gisholt turret lathes and Kearney & Trecker mills out the shipping door, replacing them with a handful of large to medium-size CNC lathes and vertical machining centers. In fact, even though the shop already had a 40-taper, 24- by 16-inch VMC, it was primarily used for secondary operations and light milling work. A faster, more capable 40-taper machine was needed.

The shop reached out to Jeff Luth of Luth Machinery Sales. “He’s been in the machine tool business since the 1970s and knows all the people, all the major brands,” Mr. Hass says. “In fact, I’m pretty sure we bought practically every piece of CNC equipment in this place through him, so we trust his judgment.” Mr. Luth recommended that they visit a local shop to take a look at a Kent CNC machine. It was a convincing visit.

When Journeyman Machine needed a fast and accurate 40-taper machine for its smaller parts, the owners turned to Kent Machinery. Whereas the shop’s philosophy had usually been to replace old machines with models of around the same size or larger, a gradual shift away from production work indicated the shop should think smaller and faster.

Journeyman took delivery of its Kent USA KVR-4020A vertical machining center in November of 2018. The 40- by 20-inch machine has a chilled, 15-horsepower, 10,000-rpm spindle, a 24-tool double-arm automatic toolchanger (ATC) and a FANUC 0i-MF control. Mr. Hass says he is happy with the package they put together which included other “out-of-the-box” features such as a belt-style chip conveyor, a 1,000-psi ChipBlaster, tool length measurement, a fully loaded control with 400-program storage and 200-block lookahead.

The new technology has been a game changer for Journeyman Machine in a number of ways, Mr. Hass says. Using the high-pressure coolant-through capability together with solid carbide drills, he says the KVR makes holes “about as fast as a punch press.” He milled a lot of steel and stainless steel since the shop received the new machine, but the KVR really shined on a recent 80-piece aluminum repeat job, where the 10,000-rpm spindle, faster rapid traverse rates, and 1.3-second tool changes reduced the cycle time by more than 30%.

While metal removal capability and machine accuracy are important factors when considering a new machine tool, Mr. Hass says he has been equally impressed with the little things that Kent included with the machine. The KVR is equipped with coolant washdown and air-hose connections on the machine front for operator convenience. The communication cables were neatly routed, as was the electrical connection, making the machine hookup about half an hour. The fourth-axis prewire, automatic oil skimmer, dual LED work lights, and other machine features made the KVR installation relatively easy, and its use since then both reliable and predictable.

“We were quite impressed with all the little bells and whistles they included. Even the leveling pads and screws were designed for ease of use,” Mr. Hass says. “There were no problems at all with integrating it into our existing workflow, nor were there any challenges with programming. We wouldn’t hesitate to buy another one.” Actually, at the time of writing, the shop just received a proposal for a KVR-1580 to replace one of its old 50-taper machines. “A lot of steel gets delivered every day to the various industrial parks around here, which is why it’s so important to keep updating our equipment," Mr. Hass adds. “I expect that Kent will be a part of that for a long time to come.”