Plant tours and the IMTEX metalcutting exhibition reveal a sector that’s poised for export, focused on the future and driven by an independent, entrepreneurial spirit.

Inside the plant of machine tool builder Bharat Fritz Werner (BFW), the international press learned about the company’s Iris system for preventive maintenance, machine status, order tracking and more. Outside are well-cultivated gardens that evidence that the company’s future focus involves not just emerging technologies, but also responsibility for its own growth.

UCAMM uses Indian machine tools (in this case, an AMS VMC from Ace Designers), to build rotary tables for machine tool builders headquartered in Germany, Japan and other countries as well as its home market.

Evidencing a can-do spirit that permeated every stop on the tour, UCAMM developed its own line of jig-grinding equipment to better control the manufacture of its rotary machine tool accessories.

An independent spirit is common among Indian manufacturers. As is the case in the BFW plant shown here, many produce all their own toolchangers, spindles and other components. Citing a particular opportunity in the moldmaking industry, BFW is also one of many companies that cites the U.S. as an important goal for exports.

One company that manufactures its own components and is already in North America is Jyoti. The machine shown here is designed specifically for the production of automotive differential cases (overall, the Indian machine tool industry is heavily dependent on automotive components). The part is maneuvered into position against various specialized tools on a 12-position turret to avoid the need for complex, time-consuming setups to reach inside the bores for machining. Jyoti is also the owner of Huron, another machine tool builder active in North America.

Machine tool builder Marshall Machines Limited operates in North America as Marshall Automation from an Atlanta office that opened in February. One significant offering is the company’s IoTQ (Internet of Things for Quality) line of products, which are designed to bring data-driven manufacturing functionality to shopfloor-level employees. For example, the SmartCorrect gaging station measures parts emerging from a turning center and adjusts tool offsets automatically to keep machining within tolerance.

Organizers of the 2019 edition of India’s IMTEX metalcutting exhibition expressed one regret: not thinking bigger. Had the India Machine Tool Manufacturers’ Association (IMTMA) built a sixth hall in addition to the recently completed fifth hall of its privately funded, 80,000-square-meter Bengalaru International Exhibition Center (BIEC), the show likely could have been even bigger.

Nonetheless, the 50th edition of IMTEX was the largest yet, drawing more than 91,000 attendees and more than 1,200 exhibitors to the BIEC January 24-30. The state of the show reflects the state of the Indian manufacturing industry, with the IMTMA projecting both production and consumption of machine tools to expand by more than 25 percent this year. 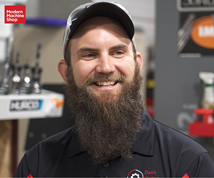 Video: Starting Your Own Machine Shop — the Rewards and Challenges

MTMA representatives say such rapid growth is outside the norm and ﻿likely unsustainable. Still, they remain committed to thinking big, and thinking beyond India. As outlined in the the organization’s ambitious “Vision” plan, increasing exports is a critical short- and long-term goal, even in the face of threats ranging from insufficient infrastructure to inconsistent government policy.

Based on my recent visit to IMTEX and a tour of plants in and around Bengalaru, the MTMA’s bullish attitude may well be justified. Here are three reasons to watch the Indian machine tool industry, even from a vantage as distant as North America.

1. They Have North American Ambitions

Most builders focus on the domestic market first, and many cite North America as a target for the distant future. Others, however, are already here, or likely soon will be. By the time this article is published, Marshall Manufacturing will be offering “plug-and-play” Industrial Internet of Things (IIoT) turning technology from an office in Atlanta. Bharat Fritz-Werner (BFW) a manufacturer of milling and turning machines, sees opportunity in the mold and die sector in particular. Representatives say they could foresee opening a U.S. office within a year. Some manufacturers, like turning, milling and grinding equipment builder Ace Designers, see a presence in Mexico as a springboard to the U.S. market. Examples of Indian technology available or soon to be available in North America can be viewed in the slideshow above.

2. They Are Focused on the Future

Emerging technologies like additive and data-driven manufacturing are essential if India is to be a player in the advanced manufacturing markets of the future, and the tour presented ample evidence of manufacturers’ focus on both. For example, machine tool builder ﻿Ace Design Systems recently started its own additive manufacturing company, Amace. Titan Engineering and Automation Limited (TEAL), a manufacturer of aerospace parts for the likes of Boeing and Airbus, recently assembled a “smart cell” consisting of nine interconnected machining centers. Knowing when machines need maintenance and tools will wear—a critical concern when machining of materials like titanium and Inconel—has significantly reduced labor costs. The next step is implementing automated guided vehicle (AGV) robots to load and unload the machines. In addition to functions like machine monitoring, BFW’s cloud-based Iris system enables customers to track progress on their orders before they arrive.

3. They Have a Drive to Succeed

At a concluding celebration of IMTEX, representatives of the IMTMA recalled that many people did not take the organization seriously when it began construction of the BIEC in 2007. After all, they say many other large machine tool exhibitions take place at venues built and funded by governments, not privately owned trade associations. Suffice to say, these representatives consider their critics silenced.

This same independent, entrepreneurial spirit filters down to the organization’s members and even members’ customers. TEAL, for example, makes parts so critical that no photography was allowed during the media tour. Nonetheless, the company keeps a backup diesel generator ready in the event of a power outage. ACE prides itself on its recent implementation of five different ISO standards for quality, environment, information security, social accountability and health and safety. BFW’s story is similar to that of many Indian machine tool manufacturers that split long ago from foreign partners and now make all their own components. “We do everything ourselves” was a common refrain.