Your Competitors Can Do What You Do

With the barrier to entry for machine shops so low, competitive advantage is not necessarily tied to the ability to machine parts. Increasingly, it is a shop’s ability to document and streamline digital processes that sets it apart from competition.

The terminals at East Branch Engineering and Manufacturing’s machining centers run ProShop ERP software, which allows machine operators to document each machining operation and its outcome. The software turned out to be a key competitive advantage for East Brach after a key customer began streamlining its supply chain last year.

It is still possible to run an efficient machine shop without using comprehensive shop management software. During our travels around the country, we still encounter shops using paper job travelers and filing cabinets stuffed with job quotes, shipping documents, certifications, tool management archives, purchasing records and job schedules. The common thread for these shops, typically, is that they are small, family-owned business with stellar retention rates for employees who rarely take time off or get sick.

East Branch Engineering and Manufacturing in New Milford, Connecticut, used to fit this mold. Founded by Paul Guidotti in 1989, the shop today has 20 multi-axis machines for milling and turning, run by 16 employees, including Mr. Guidotti’s son, Chris, who joined the business in 2003 and today serves as vice president of manufacturing.

Learn How Additive Manufacturing Will Change Production at AM In-Depth
Trained in a Day, Automated Inspector Performs Faster than Humans

Chris Guidotti says that back in 2014 when the company had only 10 employees, he began noticing day-to-day problems that, taken together, were locking the company out of pulling in larger customers. While East Branch was using basic shop management software at the time, the system lacked several core capabilities. “Blanket orders were an absolute nightmare to manage,” he says. Paper-based travelers were static and often not updated. Certifications were managed outside the system and had no direct tie-in with the software. The software’s quality module was difficult to use, and there was no control of records or revision-control processes.

By 2017, these problems had reached a tipping point. After conducting research into several software platforms, Mr. Guidotti and the team at East Branch implemented ProShop, a cloud-based enterprise resource planning (ERP) software system that promised to combine elements of manufacturing execution system capabilities with quality management system elements into a comprehensive platform. (ProShop points out that it also offers an on-premise option for customers who have concerns about cloud services.) Capabilities include software modules for tracking and managing work orders, material inventory, users, workholding and fixtures, work cells, certifications and audit reports, tooling, employee training and more. Paul Van Metre, co-founder and ProShop president, says that ultimately, the software is designed at its core to reduce tribal knowledge and “democratize everything in the shop.” 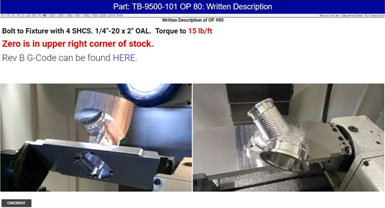 Among the features included with ProShop software are visual work instructions that can be accessed by machine operators at computer terminals located at each machine.

“As the Baby Boomers retire, it’s hard to find people to replace them,” he says. “It’s hard to hire minimally trained people and have them be successful. You need to provide them with a lot more information than just a paper traveler and some paper setup sheets that the programming department sent out. When it comes to shop management software, we feel like shopfloor users are just as valuable, if not more so, than the people in the front office.”

A recent encounter with a top customer at East Branch demonstrated to Chris Guidatti exactly what Mr. Van Metre meant.

Late last year, one of East Branch’s largest customers set up a one-hour meeting with East Branch management to discuss a slew of changes that had taken place at the customer’s business. The company had been bought out by an investment firm, and the new owners were drastically scaling back the approved vendor list. The company was dual sourced on many of its products, including the electronic housing components that East Branch produced via milling operations on its two Okuma machining centers.

“We did not want to lose these guys,” Mr. Guidotti says. “This customer was a really big key to our growth. The parts we were making for them involved a lot of hogging out — very unattended with long run times. For us, it was a way to really keep the machines running, and we made good profit because we didn't have a guy standing in front of the machine.”

Mr. Guidotti began the meeting with a tour of the facility. When it became apparent that the two company representatives were not familiar with general shopfloor operations, he decided to bring them right up to the Okuma mills that happened to be running their company’s parts. Adjacent to each of the Okumas is a terminal that, via ProShop, has access to all of the information regarding those parts. (It is worth mentioning that Mr. Guidotti insists that nothing was planned regarding this tour. It was simply fortunate timing, he says, that the Okumas were running the company’s parts during the representative’s visit.)

Here is an example of visual setup instructions that are accessible at any machine terminal running ProShop software.

While the tour group was standing in front of the machines, machine operators logged in and out of jobs on the machine terminals. They updated the work flow and added inspection data on the spot. “The buyers had never seen that before,” Mr. Guidotti says. “Usually, they toured shops that used paper systems, and the guys were writing stuff down on travelers that would get queued at the end of the day before being sent to somebody else who would enter data into the system. Here it was all live, in real time. And they were actually seeing it happen.”

After seeing the machines in action, the group made its way to one of East Brach’s conference rooms to continue walking through its operations. Using ProShop, Mr. Guidotti outlined the steps and control processes his company had put in place for estimates, work orders, scheduling, time tracking, quality control, inspection, shipping and more. He showed the visual setup operations that each machinist can access, as well as the steps that are outlined in case a problem arises. Mr. Guidotti told the customer representatives that since the operators are responsible for documenting each machining operation and its outcome, any issues that arise, such as a scratch on the part, can be sourced to a particular time and place within the software. “We were demonstrating this live,” Mr. Guidotti says. “We didn't cherry pick this stuff. We picked one of the parts that was running at the time and said, ‘Here's what we're doing with your parts.’ They had never seen that before.”

The fact that the customer was dual sourced for this family of parts never left Mr. Guidotti’s mind, he says. While he was demonstrating East Brach’s processes, the customer mentioned that East Branch’s competitor for these parts was using a paper-based system, and that this was causing issues in a few key areas. The customer also mentioned that its company was downsizing. So, there in the conference room, Mr. Guidotti loaded East Brach’s contract record with the company and began editing the personnel list based on what the customers were telling him.

“And that did a few things for us,” Mr. Guidotti says. “In front of them, in real time, we loaded their contract record. We ended up getting a handful of extra contacts at the customer. We got the new quality manager’s name, and we got a couple of engineers’ names. So not only did we show that we were willing to update things in real time and make sure the information was correct, but we got a little bit more information out of them.”

As the meeting continued, it was becoming clear to Mr. Guidotti that the customer was not entirely satisfied with East Branch’s competitor, specifically regarding flow-down requirements for certifications. The customer began volunteering information about these concerns, essentially stating that the competitor was often late when it came time to hand in the certifications and supplier Certificate of Conformance documents. So, Mr. Guidotti loaded the customer's work order and, in real time, provided a cert package to the customers for their parts. With a few clicks he pulled up the material cert, the approved print, and all of the AS9102 forms. “That made a huge impression on them,” Mr. Guidotti says. 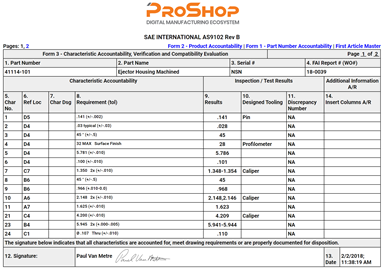 AS9102 reports can be easily and quickly pulled up in ProShop.

What was his evidence for this statement?

The planned one-hour meeting ended up lasting three and a half hours. More importantly, after the meeting, the customer informed East Branch that it would now be the company’s primary supplier. Its competitor would be the secondary supplier, only to be used when East Branch was overbooked.

“The number of orders we received doubled over the next 12 months,” Mr. Guidotti says. “And not only did they double, but the quantities on the orders doubled as well. And probably one of the best things is they postponed their quality audit for 12 months. They wanted to come in and do a two-day quality audit of the system. So, we were able to continue operating without interruption for that 12 months.”

Generally speaking, the barrier to entry for opening and running a machine shop has dropped in recent years. For example, there are perfectly capable five-axis machines available on today’s market for less than $120,000. As such, the number of start-up machine shops is on the rise — a fact that changes the nature of competition in this space. For Mr. Guidotti and East Branch Engineering, this meant that the ability to showcase tightly controlled processes — processes that were accessible and integral to the entire production chain for its customers — was tantamount to a competitive advantage for its business.

“When you're dual-sourced on a part,” he says, “your competitor has the same capability as you do. People can make the parts you're making. So, what are you competing on? You're competing on everything you do to get inside your company’s processes. That's what you compete on. And we demonstrated that we're good at what we do.”