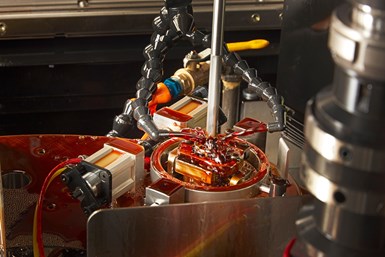 Sunnen Products has designed its SHO-965 honing oil with a low-odor, low-VOC formulation based on its most widely used general-purpose oil, the MB-30. The SHO-965 exceeds the strictest standards of the South Coast Air Quality Management District (SCAQMD), the California agency responsible for Orange County and the urban portions of Los Angeles, Riverside and San Bernardino counties – one of the smoggiest regions of the U.S., with a high concentration of metalworking operations.

“These fluids are the ‘lifeblood’ of Sunnen machines, and combined with our tools and abrasives, they help produce the best finishes we’ve seen,” says Chuck Korn, product engineer at Sunnen. “There are a number of MB-30 imitators, but they’re not as effective, and performance is critical for most high-tolerance parts.”

Sunnen says the SHO-965 is highly versatile, working on virtually any metal, and effective as a general cutting oil for screw machines, drilling, tapping and reaming. Its long service life – up to one year in the right conditions – also helps decrease cost per part.

“Our testing and the feedback we’ve received from the field indicate SHO-965 oil performs as well as MB-30 with much lower VOC content,” adds Korn. “Reduced-VOC fluids are a trend globally, so we are meeting the contemporary needs of the metalworking industry by reducing the environmental impact of our fluids without sacrificing performance.”