An oil & gas part with a lot of holes required that Utex use two different tools to ensure burr-free inner and outer diameters. With Heule’s Vex-S tool, the shop realized time savings per cycle of an entire minute by performing drilling and chamfering in a single step.
#casestudy

Combining drilling and deburring/chamfering in a single setup improved efficiency and saved Utex a minute per part. Each of the aluminum bronze shaft collars has eight to 10 holes, and the company produces 200 to 400 parts per day.

Like many manufacturers, Houston-based Utex Industries had a vexing problem: how to save time on the production line while maintaining the quality and consistency of its product. The company manufactures polymeric seals, custom urethane and rubber molding, and well service products for the fluid sealing industry. Any inconsistency in the product, such as a burr left on a chamfered hole, can lead to critical part failure.

One product that Utex makes has a collar on the seal cap to prevent leaking. The part is made of aluminum bronze and has eight to 10 holes through the outer- and inner-diameter walls on each part. The shop’s adoption of a couple of Heule’s Snap 5 Vex-S tools for its Okuma lathes have met the dual goals of efficiency and consistency.

According to Brian Boles, a programmer at Utex, the manufacturer previously used a highspeed steel drill followed by a separate chamfer tool for making the holes in the seal cap application. Now, the shop uses the Vex-S tool, which combines a solid carbide drill with Heule's Snap chamfering system to drill and chamfer the front and back of the part in one step. This new setup eliminates a tool change and second operation, shaving a minute off the cycle time for each part.

With the Vex-S, a solid carbide drill is combined with Heule’s Snap chamfering system to drill and chamfer the front and back of the part in one step. This eliminated a tool change and second operation for Utex. In addition to shortening production time, the tool saves on maintenance time as well. Utex personnel estimate that the solid carbide drill tip lasts longer than comparable drill bits, saying that with adequate cooling, the Vex-S works for a month without changing inserts.

That average time savings adds up quickly. Utex produces 200 to 400 parts in a 24-hour timeframe, drilling and chamfering 2,400 to 5,000 holes a day. With a time savings of a minute per part, the shop saves up to six hours worth of production time through efficiency gains. With the time saved, Utex has been able to manufacture even more seal caps, which has helped the shop adapt to high demand for the assembled finished product.

Another common waste of production time was the need to change broken inserts. The solid carbide of the Vex-S’s drill tip lasts longer, and replacement enables the shop to swap blades without using tools or presetting between drill changes. With adequate coolant, Mr. Boles estimates the Vex-S can go for over a month without having to change inserts.

Along with the increased productivity, another noticeable bonus is the resulting cost savings per part. Producing the seal cap with the Vex-S eliminates the need for the chamfering tool entirely. 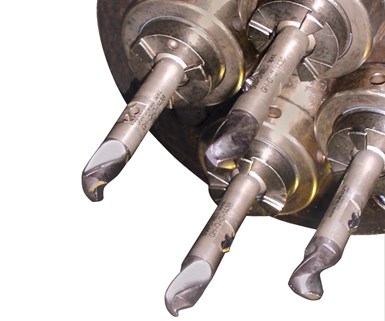 Utex uses the Vex-S tools on Okuma lathes. Previously, the shop used high-speed steel drills to make the holes plus a separate chamfering tool to clean up the inner and outer diameters.

How the Tool Works

The Vex tool uses Heule’s Snap chamfering blade, which deburrs and chamfers the bore edges without reversing the spindle, dwelling or indexing the part. As the rotating Snap blade is fed into the hole, the front cutting edge deburrs the top of the hole by cutting a 45-degree chamfer. When the blade is forced into the part, the blade slides back in the blade window, and only the ground sliding surface touches the hole, protecting it from damage while the tool is fed through the part. This prevents the need for stopping or reversing the spindle. When the blade extends beyond the back of the part, a coiled spring pushes it back out into cutting position. As the blade is withdrawn, it deburrs the back edge. When the blade is again in the blade window, the tool can be rapid fed out and on to the next hole, increasing production efficiency.