High Efficiency vs. High Feed Milling: Which is More Productive?

The combination of new cutting tool designs and CAM technology are enabling remarkably higher metal removal rates and longer tool life. Here are two cutting strategies you need to understand to get more production out of your machining centers.

High-efficiency milling has gotten a lot of attention in recent years as a way to substantially increase metal removal rates with solid carbide end mills on almost any kind of milling machine. With small stepovers, but faster feed rates and deeper depths of cut, this “constant chip load” cutting strategy can dramatically increase roughing efficiency compared to conventional machining.

However, extremely high efficiencies can also be achieved with new indexable cutters at shallow depths of cut, but substantially higher feed rates.

Which is best? To help answer that question, well-known cutting tool manufacturer Kyocera Precision Tools—which makes both types of tools—ran a series of cutting tests to see how each would perform in side-by-side comparisons. Here’s what they found out.

The Cutting Strategies and the Tools

High-efficiency milling is based on the “radial chip thinning” theory that’s been around for a long time. The basic idea is to keep the tool cutting at an ideal chip load. To increase the metal removal rate, the stepover is substantially reduced from the typical 50% of tool diameter, but the feed rate is increased in order to maintain the correct chip thickness.

Because the cutting force is reduced, you can mill with a much larger depth of cut with a solid end mill, plus get better utilization of the full side of the tool. Bottom line, this method can increase metal removal rates by 50% or more compared to conventional roughing, yet still deliver better tool life. What’s great about this process is that it works on virtually any machining center.

The reason that high-efficiency milling wasn’t used more in the past was that toolpaths were difficult to program under differing tool engagement situations such as edge cutting vs cornering inside a pocket. However, several CAM systems today dynamically adjust feeds and speeds for any situation to maintain a constant chip load throughout the cut. Multi-flute cutters have also become available—such as the Kyocera 12 mm 9-flute and 6-flute endmills used in these cutting tests—that are more efficient simply by getting more edges into the cut per revolution, and that enhances tool life and surface finish.

High feed milling with an indexable tool is pretty much the opposite. Here, you are primarily cutting with the end of the tool where the inserts are, and at a shallow depth of cut. The chip thinning principle is applied here too, though now in the axial direction.

The sheering action of the endmills used in the test cuts is further enhanced by Kyocera’s MFH-Mini cutter design using convex helical inserts that reduce the impact as the edge enters the material, reducing cutting force and vibration. The tool is extremely versatile with the ability to slot, ramp, pocket, face mill and contour. Another benefit is that replacing inserts is less costly compared to solid carbide tools.

The high feed cutting strategy can also be applied on almost any machining center, but because of that, feed rates are much higher, and with a higher chip load per tooth, this process will benefit from a more powerful machine.

How did the two cutting strategies compare? Kyocera ran a series of cutting tests in 4140 steel, 28-32 HRC, on a Haas VF3-YT vertical machining center with a 50-taper, 30 HP spindle. Here are the results:

The first shouldering cut shown in the video below is pretty straightforward. With a 1-inch, 5-insert indexable cutter compared to a 12-mm, 9-flute solid carbide endmill, their respective metal removal rates indicate that the solid tool should take roughly 2.3 times as long to machine the form as the high feed cutter, and the actual time reflected this. Note that the high-efficiency process typically only uses climb milling, which is why you see the tool constantly feeding in one direction.

Cut 2 resulted in the high feed cutter having a shorter cycle time while the metal removal rate showed that the solid tool should have been faster. You can see in the video that the high feed cutter is both climb and conventional milling, so it stays in the cut a higher percentage of the time. Since the solid endmill is only allowed to climb mill, there is a lot of time wasted feeding back around to the start of the cut. However, in both Cut 1 and 2, the solid cutter does provide a significantly better surface finish.

Cut 4 confirmed that the 1” high feed cutter showed an advantage that wasn’t as large as the metal removal calculation predicted. In this case, the high feed cutter made a lot of non-cutting moves to return to center and also ended up not maximizing the width of cut due to the pocket geometry. In contrast, the high efficiency toolpath allowed the solid carbide tool to stay in the cut a higher percentage of the time and allowed it to close the time gap.

Kyocera’s conclusions from these tests are that for lighter axial depths and a larger radial depth of cut, the high feed cutter will have an advantage. For heavy axial and light radial cuts, the solid tools will be a better choice. From a programming standpoint, maximizing the time cutting metal and reducing non-cutting moves will naturally reduce cycle times, further providing cost saving benefits. Past experience has shown that both methods (high efficiency and high feed) are ultimately effective in improving tool life over conventional machining methods.

Go to Kyocera Precision Tools for more on indexable tools and solid round tools. 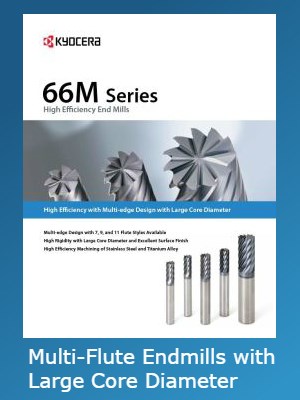 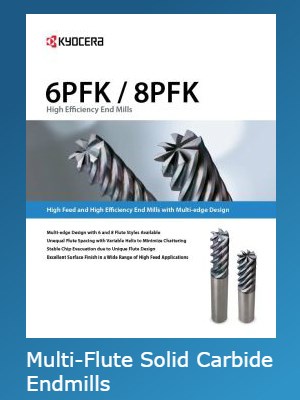 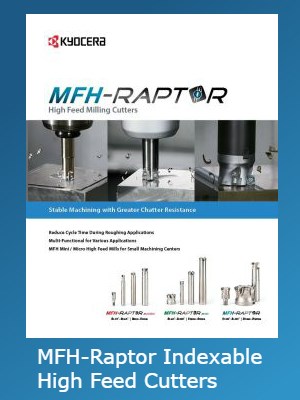