Everyone wants to reduce cycle times, but simply machining faster isn’t necessarily the answer. If high speed milling comes at the cost of reduced tool life and surface finish, the minutes gained could still cost you in the long run. But what if you could remove metal at much higher rates yet actually increase tool life in the bargain? You can with high feed milling.

High-feed milling (HFM) is a process that pairs a shallow depth of cut (DOC) with high feed rates, large stepovers, and modest spindle speeds to maximize the amount of metal being removed from a workpiece. It’s particularly adept at roughing large workpieces and deep pockets where cycle times can be cut in half compared to conventional milling. Moreover, the process works especially well in difficult materials, from tool steels to aerospace alloys.

Cutting tool manufacturer Tungaloy makes a wide variety of cutters for high feed milling and has a great deal of expertise in the process. Here’s more from Tungaloy on how it works.

See chip thinning up close and the versatility of the DoFeed high feed cutter.

There are three keys that make high feed milling so productive.

According to Brian Sawicki, Business Development Manager at Tungaloy America, while HFM will benefit from a more powerful machining center, a great thing about the process is that it can be performed on a wide range of machines so long as their CNCs can maintain consistent feed rates and accuracy at higher feeds. It’s also important to be able to generate toolpaths that maintain a constant chip load, a feature that now has become available on the leading CAM systems. After that it’s all about cutting tools that are designed specifically for this process.

While HFM can generate an extremely wide range of part features, it works best with tools with long overhangs in large components. It’s no surprise, then, that the process got its start machining die/mold cores and cavities. It’s also great for deep pockets and deep-hole milling.

The versatile HFM cutters can generate a wide variety of part features and are particularly well suited to pocketing and deep hole milling.

With conventional machining, long tool extensions seriously compromise how aggressively you can machine as the tool gets longer and less stable. The side forces on the tool can cause chatter even at conservative feed rates and can also exert a heavy toll on the machine spindle.

With HFM, because cutting forces are directed up the tool, there is very little compromise to feed rates at all. Moreover, HFM tools lend themselves to moves like ramping and helical interpolation, making them extremely versatile, requiring fewer tools, and tool changes, to machine a workpiece. In 3D work, HFM roughing also typically gets closer to the desired shape in one operation, often eliminating semi-finishing operations and simplifying the final finishing process.

An area where Tungaloy excels is the broad range of tools they make for high feed milling. The flagship of the line is called DoFeed, which is designed for versatility. It can be used for ramping, hole enlarging, and Z-axis stepovers. The line ranges in tool diameters from 0.625” to 6" and can handle feed rates up to 0.059 inches per tooth. Looking more closely at a DoFeed cutter helps better explain how chip thinning occurs with a properly designed tool, and how cutting force is redirected to minimize vibration in the cut.

The DoFeed design enables dramatic increases in feed rate while still maintaining a slender chip. By cutting with the bottom of the inserts, cutting force (shown by red arrows) is directed nearly parallel to the cutter, putting very little side pressure on the cutter to reduce vibration.

Furthermore, the positive geometry formed into DoFeed inserts enhances the sheering action of the cutting edge, also contributing to reduced vibration cutting. With wiper inserts, surprisingly smooth surface finishes can be achieved, in some cases eliminating finishing operations altogether. To enhance insert stability, Tungaloy machines the insert profile into the cutter pocket for full surface contact and support, and induction hardens the pocket to resist wear.

Besides the DoFeed offering, Tungaloy has ten additional HFM cutter models that cover a very wide range of applications.  Other high feed milling products include:

The Right Tool for the Right Applications

High feed milling is both a versatile and productive process, but Tungaloy’s Sawicki emphasizes it’s not for everything. He says, “High-feed milling is primarily a roughing operation, not a finishing process. “It is for removing a lot of material quickly and efficiently in a rigid setup,” he adds, but because of the aggressiveness of the cutting, it’s not a solution for thin-walled parts or fine part features.

HFM is, however, perfect for mold making. It is also very good for aerospace parts made of difficult-to-machine materials such as hardened stainless steels, titanium, and high nickel alloys such as Inconel. Power generation is another good application where parts such as impellers made of steel or heat-resistant alloys where a cutter needs to deliver high metal removal rates at a low depth of cut. Reduced cycle times is perhaps the primary benefit in all these applications, but with these difficult materials, longer tool life is pretty important too.

Additionally, high-feed milling lends itself to lightly-attended or unattended machining. Because the process is so dependable, and that tools can last so much longer, shops can benefit from getting more production from their machining centers and from their people. That’s a pretty good bargain. 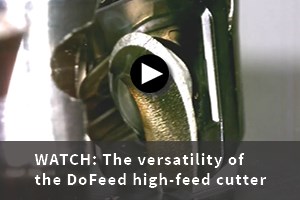 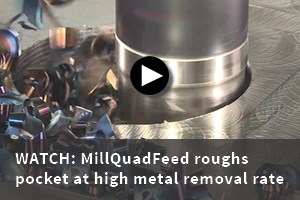 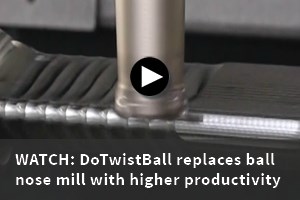