When should a machine shop consider production metal 3D printing? Part of the answer might be when that machine shop also does design. Cobra Aero is a small shop thriving with AM, because it’s also an OEM.
#zaxis

By additively manufacturing this engine cylinder, Cobra Aero was able to solve a cooling problem. Yet this early-version solution introduced another problem: S﻿upport structures needed to be removed via traditional manufacturing methods. The answer was to create a lattice-cooled version of the part (see below). The chance to pursue this kind of design iteration, transitioning parts from designs based on casting and machining to designs based on additive, is a significant factor in addressing the question of whether metal additive capability makes sense in a facility doing machining today, as the article below describes. 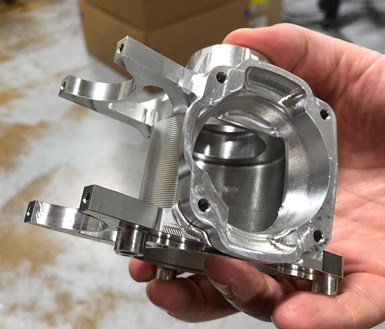 An example of a machined part the company produces. Components such as this (for the motorcycle business) are produced on three-axis vertical machining centers.

Did Cobra Aero skip a step?

The Hillsdale, Michigan, maker of small engines for unmanned aerial systems (drones) routinely uses multiple setups on three-axis machining centers to make intricate parts, such as the one in the adjacent photo. To make these parts more efficiently, the company would be a candidate for five-axis machining. Cobra has considered this, but hasn't made the move. Yet the company did make a move to a more expensive option for making intricate metal parts: a system for selective laser melting. That is, a metal additive manufacturing machine, in this case from Renishaw.

Why was this the right move? When should a machine shop invest in metal additive manufacturing (AM) as a production capability?

It's not necessarily the industry sector the shop serves determining this, nor is it the shop’s size. Cobra has just 35 employees, most of whom actually work for a more established sister company making youth motorcycles. In this case, the type of company is germane. The machine shop here is not a job shop or contract shop, but instead a captive shop making the company's product. Cobra Aero is small, but it’s a small OEM. 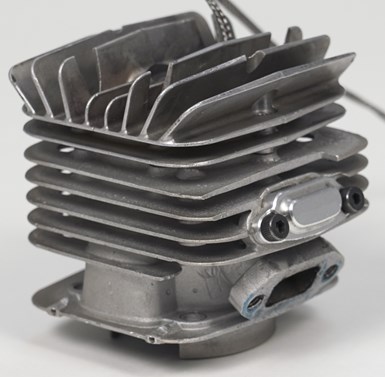 Here is the original version of the cylinder, prior to additive manufacturing. Casting limited the cooling of this part because it limited the aspect ratio of fins and how many fins there could be.

President Sean Hilbert describes the path additive has taken for the company. Machined metal parts, some of them castings, had served the drone engines to a point, he says. But the company came to the limits of castings in terms of how much power they could generate with a one-cylinder engine, because of the cooling of the cylinder. Cooling fins needed a certain minimum thickness and minimum spacing for the part to be cast. Additive allowed more engine power because it allowed better cooling through thinner cooling fins and more of them via closer spacing.

But more than that, producing with additive allowed the company to overcome casting’s lead times by producing without foundry tooling. Indeed, without any foundry at all. 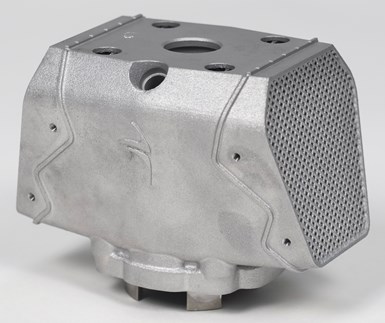 The cylinder design ultimately realized through additive manufacturing looks very different from the original casting. Integrating a cowl that was formerly a separate component created a volume able to contain lattice forms that now provide for cooling. This part can be printed without supports, eliminating support structure removal.

And even more than that, additive has allowed for ongoing design refinement. Ultimately, Cobra Aero came to a cylinder design that simplified manufacturing by both consolidating assembled parts and eliminating postprocessing steps. This design has no fins at all, but instead 3D-printed lattice structures for cooling. Other engine parts have been reinvented, too — made lighter using AM.

The ongoing nature of the design work is an important point to note. The value of additive did not, and could not, come from just one tweak. Additive realized its promise here because it was used within a context where the product could keep on undergoing change.

That context does not describe all machine shops. While machining is the most efficient production resource for parts designed for machining, additive, by contrast, is both a production resource and a product development resource. The company not doing both (the company not involved with both inventing products and producing them) will realize only half of AM's value. OEMs and the suppliers working most closely with OEMs are the companies that do both.

There is still more. Cobra has also found uses for AM as an aid to conventional manufacturing, creating prototypes for parts to be machined and tooling for injection molding. When planning to invest in the capability, Mr. Hilbert says, “We knew we would have to use this machine in ways we hadn’t identified yet, or else it wouldn’t pay back.” The kind of manufacturer with control over many different aspects of the product — invention, design, engineering, production — has the best chance of being a candidate for AM, and the best chance of realizing the range of benefits additive can provide.

Sean Hilbert of Cobra Aero discusses with me another part reimagined for additive. Design options have expanded now that the company has both additive and conventional metalworking capabilities to choose from.