With rough cutting, it’s not all about high speed. Boost roughing efficiency and tool life by keeping the cutter forces constant as you clear material from the workpiece.

Common rouging practice places a large emphasis on using the highest speeds and feeds to achieve high metal removal rates. But with traditional CNC programming, cutter paths are created that encounter variable chip loads with varying stepovers and, too often, full diameter width cuts. This variability is extremely hard on cutting tools and forces the programmer to plan for the worst-case scenario when setting depth of cut for a workpiece.

CAD/CAM software provider, Autodesk, offers an alternative. By programming tool paths that encounter constant cutter load (AKA, constant chip load) throughout the entire roughing routine, the best overall cutting parameters can be used, resulting in substantially lower cycle times. Moreover, this practice enables better utilization of the cutting tool while extending its life in the bargain.

Traditional roughing passes are characterized by using a series of offset radial passes. These passes are calculated by offsetting a planar cross section of the CAD geometry and stock model when necessary, then merging and trimming the two together. With this approach, regardless of the offset stepover value used, the tool will see increased cutter engagement at every internal corner or when driving into slots.

These internal corners and slots are where cutter forces spike, vibration increases, and when the tool is most prone to breakage. In order to operate at a high feed rate using traditional roughing, the programmer is forced to take a shallow axial depth of cut. This can create other challenges for the tool by overusing the bottom of the cutter, rather than the whole flute length. As a result, the tool stores more heat in the bottom, versus dispersing it along the whole flute, leading to premature wear.

With constant cutter load (chip load) machining, however, these compromises are mitigated. Autodesk makes programming this process possible with a feature they call Adaptive Clearing, which utilizes a strategy of constant cuts with a repositioning move in between. A depth of cut is programed that uses a much larger portion of the side of the cutting tool. To maintain a constant chip load, tool paths and cutting parameters are generated that adapt to the geometry of the part.

An inherent benefit of this approach is being able to constantly use climb cutting, where traditional roughing operations may use periods of conventional milling cuts. Because of this, there may be more retracts than expected when the reposition is over a greater distance, but ultimately, it’s still a more efficient process.

Consequently, the best overall machining process can be achieved while eliminating spikes in the cutting force. Although the top speeds may not be as high as conventional roughing, the overall efficiency of the process is improved so that cycle time and tooling cost are substantially reduced.

Put to the Test

To demonstrate the Adaptive Clearing process, Autodesk used its shop facility at Pier 9 and logged data from a SPIKE sensory toolholder while cutting 1018 steel. Inside the toolholder is a SwiftCarb solid carbide end mill, with everything running on a Haas VF2SS vertical machining center.

Machine operators need to adjust their feed rates down for the worst-case scenario, which can be visualized by the spikes. However, this means that for the rest of the operations, the program is not running at optimum material removal rates, as the many low areas show.

According to Autodesk, the area under the graph is the most telling. The more area below the graph, the more material that is being removed, and ultimately, a more efficient cut. Displayed by the graph, the low and flat areas indicate inefficiency, with the occasional spike of higher material removal.

Figure 2- With adaptive clearing, cutter forces quickly reach the maximum efficient machining rate, and maintains that rate throughout the cut. Then it repositions for the next cut. Roughing time for this routine was 2:01 minutes.

Constant forces mean less vibration within the tooling and less shock to the cutting edges caused by those vibrations.

According to Autodesk’s test, the traditional roughing pass took 08:09 minutes to complete, while the adaptive clearing technique took only 02:01 minutes.

While saving time is a major advantage, the benefits are striking, including reduced tool wear and breakage, while also providing more predictable cutting conditions. By using a larger axial depth of cut, users can utilize more of the cutter flute length without overusing the bottom or corner of the cutter. Additionally, the generated heat is spread out along the whole cutter flute length, rather than being concentrated at the bottom of the tool.

Achieving a high metal removal rate (MRR) is a major priority and is how cycle time is reduced. Higher axial cut depths require lower radial cut values to allow for reliable chip evacuation. By reducing the radial depth of cut you can increase the tool flute count and increase the metal removal rate. It also supports using chip thinning calculations to increase the cutter feed rate to maintain chip thickness. A thicker chip will also pull more heat away from the tool.

Without spikes in material removal rates, setting feed rates for maximum material removal becomes much easier. You can use the data from your tool supplier, or simply start milling, and increase the feed rates slowly to a level you are comfortable with.

When dealing with molds with complex 3D shapes, using the large depth of cut will leave larger “stair steps” in your roughed model. In situations like this, make sure to utilize the Step-Up function so that your roughed stock has a consistent stock allowance.

Generally, rapid retracts are fastest, However, you can also modify stay-down parameters. With these parameters, the tool will not retract to the top of the stock, but rather stay down as it repositions. In many cases, you want the tool to lift slightly to avoid dragging the floor during repositioning moves, which could generate undesired heat and premature tool wear.

Increasing metal removal rates, decreasing cycle times and improving cutting consistency is easier than ever before with Adaptive Clearing strategies. Adaptive Clearing strategies are easy to implement and test because, first, they do not require special tooling. Second, they don’t require a special mill; they work well on entry level mills as well as the fastest high-performance mills. Lastly, they are available for a wide range of CAD systems including SOLIDWORKS, Inventor and Fusion 360.

For more on how to get the most out of your shop with CAM technology, click HERE. For more information, visit Autodesk.com. 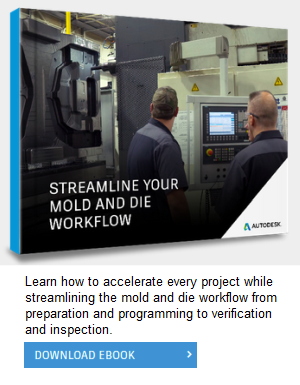