The HYBRID Additive Manufacturing and Multi-Tasking Machining Revolution is Here

It’s not just about additive vs. subtractive manufacturing anymore. A new class of machine tool combines multitasking machining with laser metal deposition as well as welding processes and gear cutting too.

In the early 1980s, machine tool builders added milling spindles to turning machines, and Multi-Tasking was born. Within a decade, the concept quickly progressed to machines that not only combined turning, milling, drilling, tapping and boring capabilities, but that also incorporated second turning spindles, multiple tool turrets, Y-axis capability, tilt/rotary milling spindles and tilt/rotary worktables. With all that capability, manufacturers could transform raw material into finished parts in a single setup on one machine, which has come to be known as DONE IN ONE® Multi-Tasking.

Of the machine tool companies specializing in Multi-Tasking, none have progressed the concept further than Mazak. Today, Mazak’s lineup of Multi-Tasking machines can handle most, if not all, of a part’s machining and processing operations. The conventional form of Multi-Tasking suffers from one central limitation, though; all its operations are subtractive. However, a new class of machine from Mazak is driving the concept of Multi-Tasking to a whole new level by bringing still more processes into mix, all on a single platform.

The Next Generation of Multi-Tasking

Here A5356 aluminum beads are laid down with arc welding on the A5052 base material and then machined to complete a tire mold.

Additive manufacturing and joining, however, represent the point at which the HYBRID revolution begins to take Multi-Tasking to the next level. In the past, a part produced with an additive process would need finishing with traditional subtractive CNC machining, adding cost on top of cost. But HYBRID requires no separate second machine and no additional setups to bring DONE IN ONE® Multi-Tasking to an even wider range of applications.

For components that range from screw shafts to drill bits and artificial bones to pump impellers, subtractive processes require starting with raw material that accommodates the largest feature on the part. Given the cost of modern materials and alloys as well as the machining time involved, this can make for a very expensive part with a long turnaround time.

Inconel 718 is added to create new part features on this 304 stainless steel cylinder.

Although these new HYBRID technologies will transform manufacturing just as Multi-Tasking itself did, HYBRID's future also includes extending these systems to a greater number of machine platforms, with products such as a gantry-type single-laser additive head system. Such a system will allow for easy modification of the laser head and better protection for its sensitive optic system—while avoiding the need for large structural modifications.

This new level of technology brings a host of new technologies to a machining platform that lets manufacturers produce more complicated parts at lower cost. Here’s an overview of what they can do:

Laser metal deposition, also known as selective laser sintering (SLS), is perhaps the simplest form of additive manufacturing, using the heat of a laser to melt metal powder selectively. By far the fastest way to build parts with metal powder, single-laser metal deposition uses one high-power laser to melt powder as it’s shot from a nozzle. Mazak’s HYBRID machines, such as the VC-500 AM, place the nozzle on an additive head capable of moving in five axes, a significant improvement over the linear motion of most additive solutions. Thanks to this innovation, the VC-500 AM is ideal for joining two materials together or building part features with super alloys such as Inconel 718.

Multi-laser metal deposition takes this technology even further. On machines such as the INTEGREX i-200S AM, a gantry additive manufacturing head uses multiple lasers to perform micromachining and coating. With advanced CNC controls, the machine can direct powder from any angle and combat any deviation caused by gravity while the AM head is tilted. These AM heads can use the heat of multiple lasers, quickly coating stainless steel with materials such as Stellite No. 6 for applications that involve impellers or other heat- and wear-sensitive parts.

HOT WIRE deposition takes advantage of wire arc additive manufacturing, a high-speed additive solution that offers programmable welding automation. As with conventional welding, an arc torch melts wire directly onto the base material. This allows for exceptionally precise sealing coatings as well as the production of near-net shape part features. On Mazak’s new HOT WIRE machines, the wire arc AM head can feature the same 5-axis capability as a milling spindle, allowing manufacturers to build new part features or welds on all of a workpiece’s surfaces.

Although conventional gear machining is a proven process that excels in medium to high-volume production environments, it often results in longer lead times, special tool requirements, redundant work holding and a higher capital investment. The HYBRID process brings all of those functions to a traditional 5-axis machining center, creating a single setup for even the most geometrically complex gear types. The cost savings from accomplishing processes such as gear chamfering and edge prep in a single setup add up quickly for any shop with low- to medium-volume gear production needs.

For more information visit Mazak. See Mazak at IMTS in their HYBRID Multi-Tasking booth (43200) in the West Building and their general metalworking booth (338300) in the South Building. 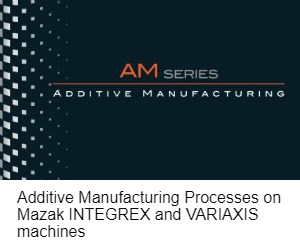 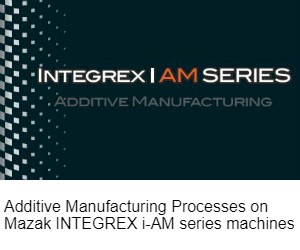 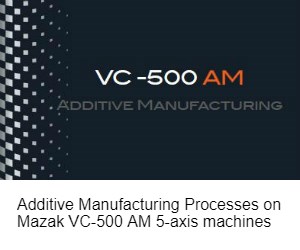