The primary difference between this CBN and other inserts is not what it contains, but what it lacks: a binder to hold the sintered material together. Rather, the nanoparticles are fused directly to one another to form a virtually solid, continuous cutting surface. This construction enables taking full advantage of CBN’s extreme hardness and thermal conductivity in a material that is notorious for work hardening.

How to Quote Faster and Win More Work with Paperless Parts 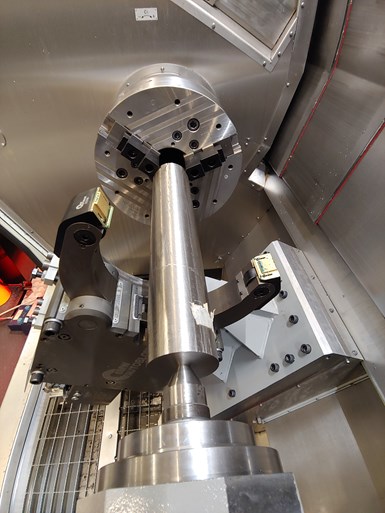 The higher-temperature, higher-pressure sintering process that makes binderless construction possible is significant for more than just machining performance. Cobalt, a critical ingredient in the “cement” that holds cemented tungsten carbide together, is increasingly rare and costly. The case is the same for tungsten, Niobium and other elements of these inserts. Eliminating the need for these materials in a cutting tool eliminates the need to pull them from the Earth, thus preserving precious resources while benefitting the environment as well as people directly affected by the mining.

The extent of these broader benefits depends on the extent to which performance benefits and economies of scale drive the expansion of binderless CBN (and perhaps other varieties of binderless insert) into new applications and materials. Meanwhile, the new NCB100 binderless CBN offering provides a ready alternative for work that otherwise would require redundant tooling and/or accounting for insert changes, wear-offset entry and the risk of tool breakage during lengthy, automated machining cycles.

The finish-turning tests were conducted at the Oregon Manufacturing Innovation Center (OMIC), a nonprofit collaborative research organization near Portland, at the request of the inserts’ developer, Sumitomo Electric Carbide, Inc. OMIC ran three NCB100 binderless CBN turning inserts against the AC51015S cemented carbide grade that Sumitomo would otherwise have recommended for the application. As expected, the carbide performed well in repeated tests, exhibiting 0.00208 inch of tip wear after 45 minutes in the cut. “There were no anomalies to note during these trials,” reads an OMIC report on the tests. “The insert showed even and predictable wear over time, creating a great baseline to compare from.”

Two of the CBN inserts, one with a low rake angle and one with a high rake angle, experienced similar levels of tip wear after 45 minutes (0.0024 inch for both CBN geometries). At this point, the carbide insert required indexing to maintain chip control. However, both CBN inserts continued to produce short, tightly curled chips. A third binderless CBN insert, this one with a medium rake angle, performed even better, wearing only half as much (0.0012 inch) at the 45-minute mark. 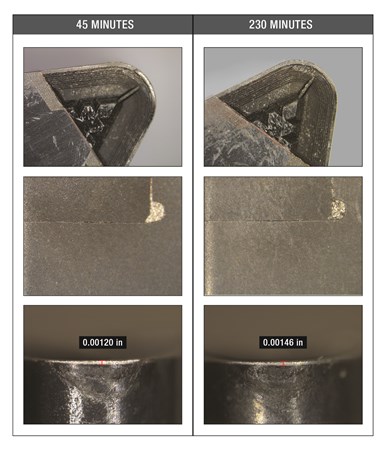 At 400 sfm (twice the speed of carbide) and 230 minutes in the cut, the binderless CBN insert was still performing consistently. The carbide insert required indexing at the 45-minute mark. Photo Credit: OMIC.

The biggest difference was speed. In repeated testing, all three CBN geometries ran at 400 sfm, versus only 200 sfm for the cemented carbide. Nonetheless, OMIC was not finished. Researchers pushed the highest-performing CBN insert (with the medium rake angle) well past the 45-minute mark, and they extended periodic wear measurements from 15- to 30-minute intervals. After 230 minutes, chips were virtually indistinguishable from those generated at the 45-minute mark. In contrast, the carbide insert had worn twice as much, was removing only half the material, and was leaving a rougher surface.

Testing continued. Pushed to 600 sfm – three times the speed of carbide – the binderless CBN lasted more than 400 minutes before exhibiting the same level of flank wear as the carbide insert at 45 minutes (although with CBN, surface roughness had reached nearly 65 Ra by the 400-minute mark). At the 435-minute mark, chips began to become progressively long and stringy. Finally, at 555 minutes, the insert tip wore into a crescent shape, “much like sanding a block of wood down on a belt sander,” says Cody Apple, machining solutions researcher at OMIC. “This was predictable and easy to detect when it occurred.”

Urmaze Naterwalla, OMIC head of R&D, analogizes traditional, “bindered” inserts to a road, with the individual particles embedded in the surface representing the cutting material (CBN in this case) and the tar representing the binding material. The binding material is softer, so it breaks down first as the surface deteriorates. It tears away in chunks to leave potholes. Without the tar, the particles are fused directly to one another. There are no potholes because the surface wears away at a relatively constant and predictable rate, resulting in two parallel divets carved from the wheels of passing traffic. 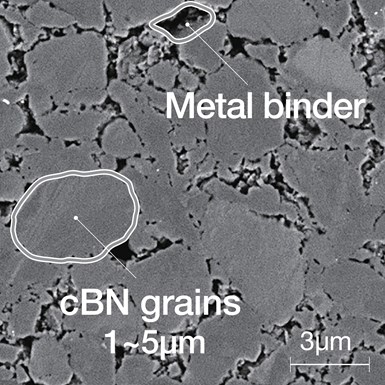 The binder in most CBN inserts can act like a shock absorber, but only at the expense of some of CBN’s natural advantages. Photo Credit: Sumitomo Electric Carbide, Inc.

Yet, binder can do more than just hold insert material together. Jason Miller, a national applications engineer with Sumitomo at the time of this writing, says it also acts much like an automobile suspension, which employs springs and other shock absorbers to smooth the ride. In fact, specially formulated binders help other CBN inserts withstand the forces associated with gear machining and other interrupted-cutting applications that are hard on tooling. Applying the new binderless inserts for such work would be “akin to applying a drag car to drive over a mountain,” he says. “It doesn’t work.”

Nonetheless, a drag car is ideal for rocketing down a perfectly smooth road. And for binderless CBN, the continuous surfaces of titanium aerospace parts like the ones machined at OMIC are essentially racetracks. Interruptions are rare, and cutting depths are shallow, recommended at only 0.020 inch in titanium. 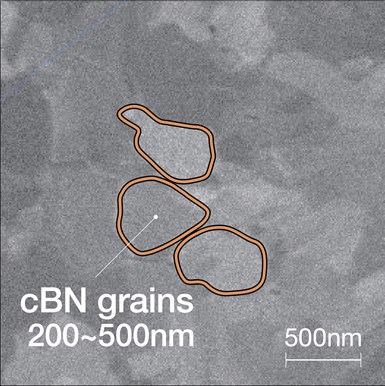 This is not to suggest that titanium turning is the only potential application of binderless CBN, nor that milling or other interrupted cutting is out of the question. On the contrary, Sumitomo reports that the inserts have been applied successfully in interrupted cuts in both powder metal and cast iron, as well as hardened steel milling in certain conditions. Meanwhile, development continues on different edge geometries and CBN particle-size formulations that add strength and toughness. The tools have also been been applied to turn medical parts from such materials as cemented carbide and cobalt chrome (Co Cr).

Research also continues into other binderless formulations. In fact, Sumitomo first applied its new direct conversion sintering process for binderless polycrystalline diamond (PCD), which is useful for machining tungsten carbide drawing dies and wear plates as well as ceramic materials. The company expects applications for these tools, and potentially others, to expand along with demand for new, highly durable yet difficult-to-machine materials for spacecraft, aircraft, automobiles, medical and electronic components and more. “We should recognize that there’s going to be an evolution, just like there was with carbide,” Mr. Naterwalla says. “The more we adapt to what this is capable of, the more that evolution will move forward.”

Meanwhile, the advance of additive manufacturing could intensify focus on finishing and semi-finishing over roughing. Compared to carving out solid billets or blocks of material, machining 3D-printed, near-net-shapes requires different techniques and different cutting tools. “This means shifting to cutters that require less radial engagement but will move with more speed,” Mr. Apple says.