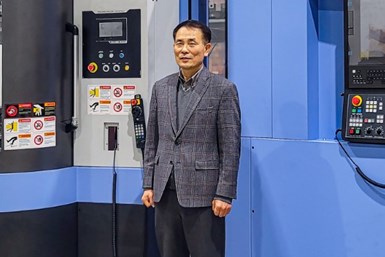 Doosan Machine Tools has named James Kim the new CEO of its North American operations. Mr. Kim has spent the past 37 years at Doosan in a variety of roles.

“I am honored to be recognized for nearly four decades of faithful service, and I greatly look forward to promoting the incredible technology Doosan has to offer,” Kim says.

Kim has served Doosan Machine Tools America for the past 18 years. Prior to that, he was based in Doosan’s South Korean headquarters as marketing team leader for the Machine Tool Business Group of Daewoo Heavy Industries. In his time in the United States, he has taken on many roles, including sales management director, vice president of Strategy & Planning and corporate secretary (also a VP role).

“We’re very excited to see James in this new role,” says Jim Shiner, vice president of Sales and Marketing at Doosan Machine Tools America. “He has always been an open communicator who works to establish trust and build authentic relationships.”