The expanded department will keep upwards of 1,000 rebuilt spindles in stock and ready for exchange. 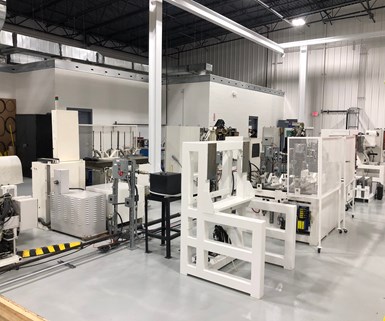 As part of a recent $15 million investment in its Florence, Kentucky, manufacturing campus, Mazak Corp. has announced the completion of its expanded Spindle Rebuild Department. The expansion coincides with other Mazak investments including new Technical Centers in Northern California, Florida and Canada.

The Spindle Rebuild Department supports every Mazak machine tool spindle in North America, including over 2,000 different models covering a range of horsepower ratings and speeds. The expanded department will keep upwards of 1,000 rebuilt spindles in stock and ready for exchange, especially those found in Mazak’s most popular machine models.

The spindle rebuild echnicians use only Mazak replacement parts to rebuild Mazak spindles. They perform every stage of the repair and rebuild process, provide comprehensive and trackable spindle documentation and conduct stringent testing of every spindle, the company says. The expansion has made room for additional technicians and also allows the department to boost its rebuild output to 100 spindles per month.

“With our new facility, we have the capacity to return repaired spindles in three to five days and ship remanufactured spindles in less than 24 hours,” says Matt Whissel, spindle repair manager.

In addition to visiting in person, individuals will soon be able to see the expanded Spindle Rebuild Department and Mazak’s manufacturing campus as part of its interactive 360 Kentucky Campus Tour.