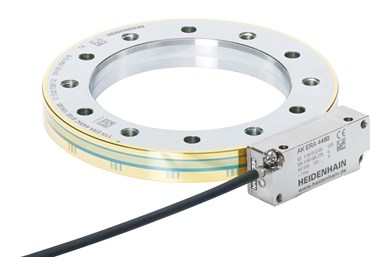 Heidenhain has announced several technical upgrades to its ERA 4000 angle encoder series, increasing reliability and functionality. These bearingless encoders have been used in machines in the metrology, machine tool, semiconductor and robotic industries for decades. With these upgrades, the new ERA 4000 series is improves accuracy, ease of use and logistical flexibility, while also being mechanically compatible with past models.

Heidenhain’s ERA 4000 angle encoders consist of a steel drum at various diameters with the 20-, 40- or 80-micron graduation on the outer diameter, and a scanning unit that reads the graduation. As an incremental system, there are reference marks available as distance-coded or one per revolution.

The most significant upgrade to these encoders is adding Heidenhain Signal Processing (HSP) to the scanning units. This feature is an added circuit where the LED is dynamically controlled, and where the scanning unit “learns” of the quality of signal coming back from the drum then adjusts the LED intensity on the very next signal period. HSP operates in an analog way and actually increases the speed capabilities of the encoder system to 1 MHz scanning, for a 285% increase.

HSP also persists through contaminants on the drum-like fingerprints, dust and liquid droplets, without amplifying electrical noise as encoders more sensitive to those types of contaminants often do. The result is improved reliability which results in less machine downtime.