Job shops are seeing the benefits of keeping their facilities clean. Appearance matters as more and more customers are visiting for open houses, audits and general tours. In fact, Modern Machine Shop’s latest Top Shops survey results showed that leading shops are more likely than others to have open houses or invite customers to visit. Appearance also matters when trying to attract the next generation of skilled workers. 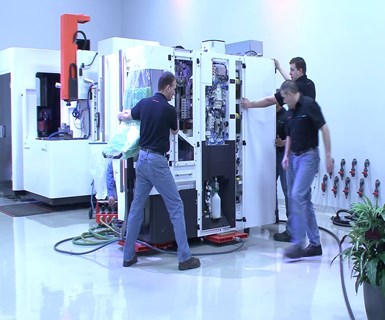 Air casters fit within the footprint of the machine and can move omnidirectionally, including rotating in place, making it possible for operators to easily navigate restricted spaces and tight clearances.

Machine tool builders are also seeing these benefits. Just like shops that reorganize their facilities as they add new equipment or create machine cells, machine tool builders must quickly move machines in and out of production lines to respond to changing needs. In this case, AgieCharmilles, a division of GF Machining Solutions (GFMS), needed to reorganize the equipment in its showroom to best highlight the machines it builds for the automotive, aerospace and medical industries. “We try to be a one-stop shop for milling machines, EDM and lasering,” says Jesus Ledesma, who is refurbishment and facilities manager for AgieCharmilles in Woodbridge, Illinois.

In its showroom, the company had recently installed industrial-grade epoxy flooring, which can cost more than $10 per square foot and represent a significant investment in a company’s equipment presentation.

Damage to Shop Floors Is Expensive

Epoxy-coated floors have proven themselves to be more resistant than untreated floors to general wear and tear as well as chemical stains and oil and water damage. Under ideal conditions, epoxy floors can last years longer than their untreated counterparts.

AgieCharmilles knew that the heavy-duty forklifts that it had been using to move machinery on its other flooring fell outside the definition of ideal conditions. The last thing the machine tool builder needed on its new epoxy floor was a forklift’s propensity to inflict scratches, dents and even worse damage. “We didn’t want to scratch it up using forklifts and walkies, so we needed to go with a different system,” Mr. Ledesma says.

The company found its answer in a technology associated with an unlikely source: air hockey. AgieCharmilles’ solution was an air caster rigging system designed to move equipment across the floor by floating it. Anyone who has ever watched or played air hockey has witnessed the technology in action. The puck floats on a thin layer of air with minimal friction, so it takes very little to change its direction. The same principle applies to moving multi-ton loads such as AgieCharmilles’ machines; but unlike air hockey, all machine movements are tightly controlled.

The air caster system slides under the equipment to be moved, fitting neatly within the footprint of the machine.

After the air caster rigging system slides under the equipment — fitting the footprint of the machine — operators attach an air hose connected to the facility’s standard compressed air supply. The hose fills up air bags attached to each air caster. Each filled bag forms a seal with the floor, at which point excess air leaks under the bags to create a film of air no thicker than a business card (around 0.003 to 0.005 inch thick). Using this new system, AgieCharmilles can float its 14,000-pound machines on air.

Since the air casters can move omnidirectionally, including rotating in place, operators can navigate restricted spaces and tight clearances. Contrast that result with forklifts, which require a major amount of clearance for maneuvering and pose a problem for precisely positioning the equipment. According to Mr. Ledesma, air caster systems are much safer than forklifts because they can’t back up into anything.

Instead, operators can safely push the equipment with little effort because the air casters require only a tenth of the force that would be used to move a load on wheeled casters. Another benefit of the air casters is that neither certification nor training is required to operate them.

According to AeroGo, the AgieCharmilles team experienced some minor obstacles while implementing the new system, such as a hose that needed to be replaced, but the rest of the changeover went smoothly. Mr. Ledesma says his operators found the system to be very simple, “easy to understand and extremely easy to operate.”

The change has meant significant time savings for AgieCharmilles, which can relocate and reposition machines in minutes. According to Mr. Ledesma, the air caster rigging system has performed beyond expectations. The loads float across the floor with a friction coefficient of 1% or less, keeping the heaviest loads from even touching the floor. The air casters spread the weight of the load evenly over a large surface area instead of concentrating it at an isolated number of touchpoints, as occurs with wheeled methods.

The company says its adoption of the air caster rigging system aligns with its policy of continuous improvement. The system’s efficiency and availability of on-demand rigging enable the facility to reconfigure its production line at any time, easily move machines from factory to the showroom and keep the epoxy floor in mint condition.