This micro-volume coolant delivery system uses ethanol as the cooling medium for non-ferrous workpieces. The ethanol evaporates after it cools the cutting tool, so no residue is left behind on machined workpieces.
#metalworkingfluids 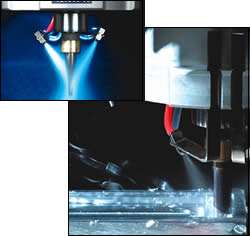 This ethanol-based coolant system offers an alternative to traditional coolants for HSM of non-ferrous and plastics materials using micro tools. After it cools and lubricates the cutting tool, the ethanol evaporates without leaving residue on the workpiece.

This ethanol-based coolant system offers an alternative to traditional coolants for HSM of non-ferrous and plastics materials using micro tools. After it cools and lubricates the cutting tool, the ethanol evaporates without leaving residue on the workpiece.

Ethanol may soon play a bigger role not only in the way future vehicles are powered, but also how micro tools are cooled during high speed machining (HSM) operations. Datron Dynamics (Milford, New Hampshire) has developed a micro-volume coolant delivery system for its high speed VMCs that uses ethanol as the cooling medium. The ethanol evaporates after it cools the cutting tool, so no residue is left behind on the machined workpiece. This alternate coolant technique eliminates the recycling and disposal issues inherent to petroleum-based coolants, and it makes secondary workpiece degreasing unnecessary. Ethanol’s low viscosity allows it to reach the tool tip for effective cooling and lubrication at high spindle rpms, which may not be possible using emulsion-based coolants.

Ethanol is a naturally occurring form of alcohol with a low evaporation temperature. Though flammable, it is safe for use with workpiece materials that will not spark or develop an unusually high amount of heat during the machining process. Suitable materials include non-ferrous metals such as aluminum, copper, magnesium and brass, as well as a variety of plastics (excluding some polycarbonates whose crystalline matrix may be damaged by the ethanol). It is obviously not appropriate for machining ferrous materials, because the sparks generated as a carbide tool cuts such material could ignite the ethanol. In addition, ferrous materials should not be used for workpiece fixturing, in case a cutting tool inadvertently contacts the fixture as a result of a programming or operator error. The fumes that are generated as the ethanol evaporates are removed via a fan located within the machine enclosure. Optional fire suppression equipment is available.

An effective coolant delivery system is important to reduce cutting temperatures during HSM operations. It is also necessary to provide proper lubricity to allow a tool to move swiftly across the surface of a workpiece, notes Dr. Walter Schnecker, Datron Dynamics’ president. “Micro tools require a lubricating agent with a lower viscosity than water to ensure that the coolant reaches the cutting edge of the tool at the high spindle speeds,” Dr. Schnecker explains. “Ethanol is thinner than water and runs quickly to a tool’s cutting edge. Emulsion-based coolants, which typically have a higher viscosity than water, are therefore not as effective in lubricating micro tools during HSM operations.”

The coolant delivery system consists of an ethanol reservoir and two delivery nozzles. The ethanol is sprayed on the tool and the surrounding workpiece surface in a fine mist—micro tooling does not need a significant volume of coolant. The maximum output of the system is 25 mL/min., which translates to a consumption rate of 0.4 gallons of ethanol per hour. Dr. Schnecker estimates that most users typically consume approximately 1 gallon of ethanol per machine per day. “Recycling an oil-based coolant can cost as much as $12,000 per machine per year; recycling emulsion-based coolant can range from $2,000 to $4,000 per machine per year,” he notes. “The annual cost for the ethanol is less than those costs.”