Sometimes the standard three-jaw chuck isn't the best workholder for a job. Here are some alternative designs and some advice on where to use them. 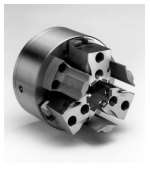 This customized Power Wing chuck combines radial and axial gripping force to hold the part more securely. The jaws can swivel five degrees in either direction to accomodate workpiece irregularities.

This customized Power Wing chuck combines radial and axial gripping force to hold the part more securely. The jaws can swivel five degrees in either direction to accomodate workpiece irregularities.

Pull-back chucks, such as this customized model, pull the workpiece back into contact with the face of the workholder.

Pull-back chucks, such as this customized model, pull the workpiece back into contact with the face of the workholder.

Quick change top-jaw systems can cut workholder changeover to as little as 30 seconds. The jaw is quikly locked into a secure and repeatable position with a locating pin, stud and interlocking device.

Quick change top-jaw systems can cut workholder changeover to as little as 30 seconds. The jaw is quikly locked into a secure and repeatable position with a locating pin, stud and interlocking device.

Lathe workholding is an important but often overlooked element of efficient manufacturing. However, an incorrect methodology of workholding can potentially reduce the efficiency and quality of a chuck's performance, as well as pose a safety hazard. Today, standard three-jaw power chucks remain the product of choice for use in the majority of turning applications. But there are many applications where shops would do well to consider a chuck more specifically designed for the job.

Picking the best workholder can be a challenge for a lot of shops. While manufacturing managers or engineers may suspect that there is a better workholder for the job, few feel that they have the in-house resources to thoroughly research "non-standard" alternatives. With the leaner manufacturing environment that has become common practice today, few companies feel they can afford to keep a workholding specialist on staff. And so standard work-holding solutions prevail, even though many turning processes could be significantly improved with chucks more appropriately capable for the job at hand. 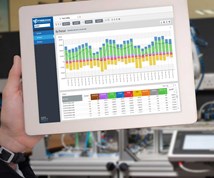 What metalworking process managers should understand, however, is that finding better alternatives is not as difficult or expensive as they might suspect. A range of standard specialty chucks are available from manufacturers today that can solve a lot of the typical problems that shops encounter. And many of these models can be further tailored to an application with relatively minor (from a custom manufacturing standpoint) modifications to a standard design. Moreover, shops can help bridge the knowledge gap by drawing from the expertise of those who work with workholding every day. Many chuck vendors are able and willing to help shops select which of these standard specialty chucks are best suited to any given application. The following is a brief overview of some specialty chucks you may want to consider using in your shop.

When chuck jaw actuation is toward the center of the chuck, it is considered radial movement. Examples of radially-actuated chucks include: standard stroke, long stroke, standard precision and ultra-precision. Many of these chucks are available in two-, three- or four-jaw configurations. All traditional standard chucks are designed to maintain a specified gripping force at determined levels of speed. However, if heavier jaws are added to a standard chuck, these figures become invalid, and gripping force may be threatened or even cease to exist at surprisingly moderate speeds.

Many of today's workholding manufacturers are committed to developing radially actuated chucks that challenge this problem and others, and meet more specific application requirements. For instance, some manufacturers can provide counter-balanced chucks that are designed to counteract centrifugal forces during high speed turning.

Other radially actuated standard chucks for specialty applications include quick-jaw-change models that dramatically reduce jaw changeover time. For example, the QB300 series from Kitagawa uses a simple master jaw design that incorporates an interlocking mechanism, a locating pin and a stud. Because no long stroke cylinder is required to operate the chuck, there is no need to replace the hydraulic cylinder, cylinder adapter or draw tube. This results in significant savings. The design requires only inexpensive top jaws, and offers change times of just 30 seconds for all three jaws.

Some radially actuated models are designed to accommodate applications requiring an extra long jaw stroke. Because a wide range of stock sizes may be gripped with one set of stepped hard jaws, a dedicated first operation lathe can support two or three second operation machines without changing jaws. A long stroke chuck also may allow for the combining of first and second operations in the same setup. This is accomplished by gripping the rough stock with serrated soft jaws for the first operation, then turning the part around and chucking on formed stepped jaws for the second operation, all the while using the same part program. With this arrangement, all turning operations are completed before the part leaves the machine and no material need be staged for the second operation.

Standard chuck designs also are capable of handling a number of non-round stock configurations such as square bars or irregular workpieces such as crankshafts. For instance, some four-jaw power chucks have two independent sets of self-centering jaws that grip and locate on two separate diameters, one of which may not necessarily be at the center of rotation.

Other examples of standard chucks for specialty applications include self-contained models. Self-contained chucks are desirable for applications where a workpiece is long and has a larger diameter. This type of chuck is a stand-alone, self-contained unit that eliminates the need for the standard power arrangement (cylinder and draw tube). A self-contained chuck allows for the use of the full ID capacity of a lathe spindle and permits a larger capacity from the same lathe. These chucks are particularly useful for machining the longer and larger diameter workpieces, for instance, that are commonly found in the oil drilling industry.

Collet chucks utilize a tapered interior sleeve to create gripping force. Collet pads can be used to accommodate square, hex or round stock. They are available in pull-back and set-length styles. Because centrifugal force has minimal effect on collet chucks, they are ideal for running bar stock in high speed applications.

When chuck jaw actuation has movement pulling back towards the body of the chuck, it is considered axial movement. These chucks are used to grip unusually shaped parts or parts with draft angles. If a standard chuck is utilized with these types of parts, some inaccuracies and complications can occur. For instance, when a standard chuck is used to grip a tapered part at high tolerances, as its jaws close radially and make contact with the part, the angle actually works to force the part away from the chuck. This may not only result in inaccurate machining, but can create unsafe chucking conditions as well.

In these difficult applications, it is best to use chucks that combine radial and axial gripping, particularly for first operation rough machining. The chuck grips a workpiece radially and then applies a powerful pull-back or axial action which significantly increases overall gripping force. Also, some chucks have jaws that can swivel somewhat to conform to component irregularities—in the case of Kitagawa's PW Series Power Wing chucks, jaws can move up to five degrees back and forth. For precision finish machining, pull-back chucks can provide excellent positioning accuracy and length control. Moreover, the combination of axial gripping with a radial movement is ideal when the application demands both high accuracy and heavy-duty gripping.

A finger chuck is another example of an axially gripping chuck. It features lever jaws (or fingers) that turn in and pull down on a part. These chucks are referred to as finger chucks due to their finger-like pull back gripping of a part. These chucks are designed for gripping unusually shaped parts, where only an axial gripping force is advantageous. They are especially utilized for the high speed machining of aluminum wheels. Other application examples include pump housings and unusually shaped automotive suspension components where the chuck is not used for locating, but to hold the part back on- to locators. Some shops continue to use manual clamps for such applications and are therefore likely to be paying a huge price for inefficiency.

Finally, workholding manufacturers may offer a fourth category of standard chucks for specialty applications, called specialty chucks. These chucks may include diaphragm and magnetic versions, as well as many others. And then at the very high end, some manufacturers offer chucks that are completely engineered for a specific application. Some specially built chucks can be quite elaborate. While they typically demand a substantial investment in engineering, special chucks can be very cost effective, particularly in high volume applications where a finely optimized process can pay large returns, or with some problem production parts that can't be turned any other way.

There is a great deal to consider when selecting a workholding solution—the shape of the part, ID or OD gripping, the speed of the application, accurate or rough operation, the limitations of the machine, the material and more. Sometimes the standard three-jaw chuck is indeed the best overall value. But there are many, many other cases where shops are missing the opportunity to improve their turning processes through the selection of more productive and safer workholding solutions. A good specialty chuck manufacturer can help make sense of it all by providing suggestions on what's the best workholding strategy for your shop, and for your applications.

Spencer Hastert is vice president of the Kitagawa Division of Sumikin Bussan International Corporation (Schaumburg, Illinois). He is a 25-year veteran of the machine tool and manufacturing industries.