Machine monitoring evolves from a progress-tracking tool to a foundational element of quoting, scheduling and process planning.

Tablets at each workstation provide operators with a means of tracking progress, inputting reasons for downtime and communicating with the rest of the shop.

Whether for commercial jet engines or iconic military helicopters like the Apache and Blackhawk, most of the round, threaded parts machined at McMellon Bros. generally cannot be photographed. No matter. Too much focus on the machining risks obscuring a compelling story about the extent and pace of the change that can be wrought by pulling a few simple metrics from pre-existing CNC network connections.

At first, the goal of CNC data collection at this 20,000-square-foot Stratford, Connecticut, shop was simple. “We wanted to see when any particular﻿ machine was on, when the door was open and how many parts it was producing per day,” says Rory Miller, who runs the 36-employee family business with his brother, Casey and their father Tom, the company president. “We wanted a live feed in our programming office that would tell us, ‘Hey, this machine has been down for 14 minutes, maybe you should go investigate.’”

However, it soon became apparent that machine monitoring could be much more. Data collected directly and automatically from machine tools is inherently more accurate than data collected manually. As such, a real-time feed of machine metrics provides an excellent foundation for quoting, scheduling and other functions of enterprise resource planning (ERP) software. In short, machine monitoring “enables us to use ERP to its full potential,” Mr. Miller says.

By the time CNC data collection began about five years ago, “We started to feel like we were hitting a wall,” Mr. Miller says. Investments in new machinery and tooling were annual. The shop had also been working with local government offices and community colleges to evangelize manufacturing as a career choice and, ideally, hire more people. Barring some breakthrough, further growth would require, as he puts it, “getting more out of what we already had.”

The shop’s DNC network supplier, Macdac Engineering, offered a means of doing just that. Formerly WirefreeCNC, this company was in the early stages of developing a new machine monitoring system that it would eventually call Excellerant. Running in a web browser but housed fully on a shop’s own servers, this system offered the opportunity to collect and analyze data without security risks. Macdac needed partners, and McMellon Bros. made an ideal test site and source of feedback for developing features for shops that deal with a varied mix of high-value work.

As the machine monitoring system and the shop’s use of it evolves, the data gets more granular. One example that operators appreciate is ensuring sanctioned breaks (coffee or lunch, for example) are accounted for in the pacing bar, which is visible in this screenshot.

One of the first and most notable software features to emerge from this collaboration, the pacing bar, was implemented at McMellon Bros. this past spring. Displayed on a tablet at each workstation, the pacing bar advances in real time based on the CNC data feed. Another bar measures the actual pace of machining. As depicted above, this provides an at-a-glance view of how many parts have been produced, how many should be produced by the end of the shift and the current progress toward that goal. If machining is slower than expected for any reason — unplanned downtime, a feed-rate override, a programming problem, an overly aggressive quote — the pacing bar lags, prompting an investigation before the problem compounds.

McMellon Bros. specializes in round, threaded parts produced on twin-spindle, live-tool turning centers like this one.

Casey Miller, who manages the shop’s day-to-day operations, recalls one recent case in which a new operator had been creating unnecessary downtime by inspecting finishing work on the last machined part before starting the roughing cycle on a new one. Previously, the problem could have revealed itself only through a review of ﻿paper reports filled out by operators at the end of their shifts. The shop might have lost hours of production before discovering the problem in the first place, and the reasons for the loss likely would have been more difficult to determine. Instead, the shop was able to retrain the operator in time to prevent costs that would have added up to more than $5,000 over the life of that job. Additionally, more of the machine’s capacity could be devoted to other work. Such savings add up when they become routine, he says.

In addition to support from Macdac, the company relied heavily on Jeff Cunningham, shop﻿ scheduler, to guide implementation. He says the most significant results of the collaboration involve feeding data to ERP, not just pulling data from it. 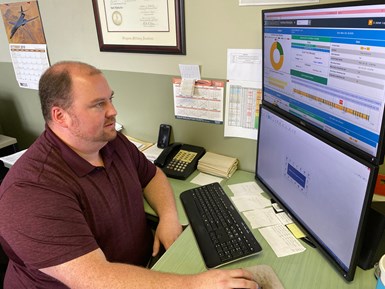 For Rory Miller and other shop managers, Excellerant provides a real-time look at the shop floor as well as foundational data for longer-term planning.

As Rory Miller puts it, “ERP has become a more powerful tool. I can pull it up at any time and find out what’s happening with a customer’s parts. If we’re not on pace, we can fix it. Historically, there might have been a day or two of lag time based on when tickets were coming in, or maybe someone was out sick and the data didn’t get entered right away.”

Requiring operators to enter reason codes eliminates ambiguity about the factors contributing to lengthy periods of downtime, which were often unclear prior to machine monitoring. More recently, the tie-in with ERP has helped the shop double-down on this approach through a “messenger” feature, which works essentially like an email or text that automatically links to the relevant job information. For instance, an operator might send the message, “I’m missing two inserts” in addition to selecting “tooling” as the reason for the machine being down. The recipient understands precisely which inserts the operator needs because the system “knows” which operation is occurring at that workstation. 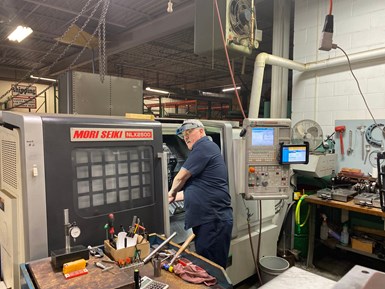 Some resisted the pacing bar at first, only to come to appreciate it later. Tom Foulke, the machinist shown here, has always liked it. “It’s a gage on how you’re doing,” he says.

Direct, automatic CNC data collection also makes quoting more reflective of shopfloor realities. One particularly important distinction is between labor hours and machine hours. “We’ve never had the ability to know that during an eight-hour shift, a machine ran for five hours and 43 minutes, and that makes a big difference,” Rory Miller says. “Before, we’d put in an eight-hour day and count that against the job, and in ERP analysis, we’d be adding up eight-hour days.

“Going by labor hours, you could end up lying to yourself,” he continues. “If you say a job took four hours, but it ran on two machines, you’re actually talking about eight hours of cycle time. This can really hurt you when, say, you quote it again, but you’re busier, so you run it on one machine.”

When a machine is down for longer than 20 minutes, the operator must choose among a list reasons prior to restarting it.

Casey Miller adds that distinguishing labor hours from machine time can significantly impact process planning. For example, the shop typically aims to churn out parts at a rate that prevents build-ups of partially processed parts between workstations, but this isn’t always the best approach. In one recent case, machining a part required two machines, the first of which cut a handle-like feature for effective fixturing in the second. This initial operation on the first machine took only five minutes, versus more than 35 minutes of cycle time in the second machine. Excellerant MDC’s color-coded graphs made it obvious that using both machines simultaneously for both operations, and batching the parts in between, would be more efficient.

From Insight to Action

A visit to McMellon Bros. this past fall revealed many signs of recent transformation. It had only recently made room for a new inspection lab as well as new machine tools. Meanwhile, Casey Miller was leading a team in the implementation of a new tool crib, where fixtures and cutters alike will be “kitted” for each job. The plan is for “water spiders” — dedicated expediters — to transport the materials so machine operators do not﻿ have to leave their stations. He says this move was inspired largely by data from Excellerant, which clarified the full and significant impact of waiting for tools and other needed items.

The next steps for data collection include working with Macdac Engineering, formerly WirefreeCNC, to pull data from older machine tools. The same company provided the shop’s original wireless network after a lightning strike illuminated the risks of RS232 cabling in the early 2000s.

The next steps for the shop include collecting data from older but still serviceable machine tools, and applying the system to work that has so far defied automation, such as deburring, inspection and part-marking. “It’ll work like a chess timer,” Rory Miller explains about these manual tasks, with operators punching in and out and entering reason codes for lengthy delays.

He expects the benefits of this approach to be similar to those of automatic CNC data collection. For instance, inspection time is currently considered an overhead cost and is measured as an average of all jobs. More accurate, granular inspection time reporting could lead to better costing and greater insight into which jobs are most difficult to inspect. That work could be sent to the CMM to improve efficiency. “We haven’t looked closely at inspection times because there is no good way to track it,” Rory Miller says. “We’d like to roll it into the system. Eventually, we won’t have paper tickets anywhere.”