In a heavy-duty turning operation at AWC Frac Valve that once took between 1 3/4 to 2 hours, a 400-pound billet of 4130 steel is reduced to a 250-pound valve bonnet in about 45 minutes using Ingersoll’s CNMX insert.

Improving cycle time, chip control and tool life can be a challenge during heavy turning of gummy metals. In fact, it is common to sacrifice at least one of these factors, if not two. For instance, cutting deeper improves chip control and speeds up the operation, but it also raises the risk of rupturing the tool at any moment. Cutting shallower may prevent tool rupture, but it also slows down the operation, requires more passes and can create long, stringy chips that are hard to manage.

In the case of AWC Frac Valve, sudden edge failure often prevented the company from manufacturing even a single complete valve piece before its tooling failed. By retooling the application with a new insert from Ingersoll Cutting Tools (Rockford, Ill.), the company tripled the material removal rate and more than doubled tool life while eliminating tool failure. 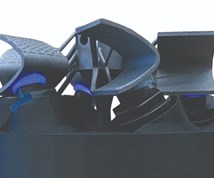 An Introduction to Superfinishing

AWC Frac Valve, a division of Archer Well, manufactures very large valves for the oil and gas industry in its 35-man shop located in Conroe, Texas. The company, running 24/5, uses a Doosan 400LM turning center for heavy-duty turning and facing operations in which a 480-pound billet of gummy 4130 steel is reduced to a 250-pound valve bonnet.

To produce this piece, the company used a conventional CNMG negative-rake tool that rarely lasted through one part. “We had to keep two back-up tools in the turret just to keep things going when one tool popped,” says Jim Beaver, AWC’s assistant production manager. “Often, the tool would rupture midway through the first piece.”

Such short tool life was not an option for Mr. Beaver, who was charged with implementing plant-wide continuous improvement. Instead, he set a new tool-life requirement for the application of at least two pieces per edge. He pointed out the challenge to the company’s Ingersoll rep during their regular weekly plant walk-through. The scale of the operation and the cutting forces involved prompted the rep to bring in Eric Strieby, Ingersoll field turning product manager. Under Mr. Strieby’s guidance, AWC tested the Ingersoll CNMX Gold Duty indexable coated carbide insert on-site.

“It was like a beta test, but on a commercialized tool,” says Kirk Cudd, AWC production manager. “Should the tool break during the test, we wouldn’t have to pick up the tab.” By contrast, he says, many tool providers offer on-site testing and reduction to price, but only after the customer purchases the tool and pays for any replacements.

CNC lead man Ben Molinar ran the test on live parts through heavy OD roughing, OD finishing and facing on 4130 steel. The results appear in the table below. For comparison, Mr. Beaver tested the latest CNMG inserts from two other providers, but neither could meet the two-pieces-per-edge requirement consistently.

Once the tool proved out operationally at the parameters established in the test, Mr. Beaver did some fine-tuning. He eliminated the two back-up tools from the turret and ramped up the depth of cut to 0.325 inch for turning and 0.225 inch for facing. The inserts now last through at least two parts with no ruptures.

“Now the failure mechanism is gradual wear, not fracture, and the indicator for edge change is simply loss of finish,” he says. As a result, tool-related production stoppages disappeared altogether and tool servicing labor costs dropped significantly. For this job alone, Mr. Beaver says the savings associated with the retooling is $75,000 per year.

The Ingersoll CNMX tool’s seating scheme enables improved insert geometry—a key factor that helped it succeed in the valve bonnet application. According to Mr. Beaver, “the big, wide front edge really breaks up the chips on a pretty gummy metal.” The big chips peel off in easily controlled “six and nine” shapes.

Compared with conventional CNMMs and CNMGs, the new seating arrangement in the CMMX makes it possible to get two sides plus aggressive, positive geometry in the same insert—something never available before, says Ed Woksa, Ingersoll’s national turning product manager. “You can cut deeper without overloading the insert and still get the second side.”

CNMMs feature a neutral rake with a negative land at the cutting edge for improved strength, chip breaking and chip flow, which enables application of higher feed rates. However, these inserts must be single-sided because positive-rake tools cannot be flipped without damaging the cutting edges with the clamping forces. By contrast, CNMGs that are designed for heavier cuts are two-sided, yet they normally have neutral or slightly positive rakes ranging from 0 to 6 degrees, which raises cutting forces.

Unlike flat insert seats found in conventional toolholders, the Ingersoll CNMX seating scheme is based on four “rest pads” on the insert that mate with dimples in the seat. The cutting edge can be 5-degrees positive, which enables freer cutting, without risk of clamping damage because the rest pads, and not the cutting edges, bear the clamping forces.

“Tooling performance aside, Ingersoll was easier to work with on a very risky operation,” Mr. Beaver says. “Besides, we were looking for a tool-life improvement only and wound up with a cycle-time savings as well.” Looking ahead, he sees at least ten other heavy-turning jobs in which the new Ingersoll CNMX will likely bring about the same improvements.