Excessive wire consumption on a wire electrical discharge machine is costly. Technology that allows slower unspooling speeds without compromising results appears to be the answer.

The reduced wire spooling speeds of the DUO series is based on the mechanical precision, wire transport and tensioning system on these machines.

According to Makino, the DUO series wire EDMs use technoogy that reduces wire unspooling rates. Cutting speeds, accuracy and finish are not affect by the lower rate of wire consumption.

The "cutting tool" in wire EDM is an energized wire that travels from reel to reel as it follows a path that "slices" through the workpiece. A wire machine that consumes less wire is getting better tool life, so to speak.

“The price of a wire EDM machine is nothing compared to the cost of wire over the life of the machine,” says Tom Frick, owner of Intricate EDM in Columbia, Pennsylvania. “Wire is the single highest expense in operating a wire EDM. Investing in low-wire-consumption EDMs has resulted in as much as 50 percent reduction in wire use for my shop, even while cutting much faster and not sacrificing accuracy, which is something to be excited about when you’re paying $5 or $6 per pound for brass wire.”

Jeff Kiszonas, Makino’s EDM product manager, adds, “Most EDM advancements in the past decade have focused on increasing machining speed without reducing accuracy, but have neglected the impact of wire consumption. I believe manufacturers are beginning to see the significance of wire consumption but still assume its benefits come at a loss to performance. This just isn’t the case when you have solid technology.” 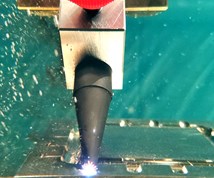 In 2008, Makino released the DUO series of wire EDMs. According to the company, these machines reduce wire unspooling rates with no adverse affects on cutting speed, accuracy or finish. This results in wire savings can be as much as 50 percent or more in many applications, adding to substantial savings for shops, the company says.

“We reduce our unspooling speeds by relying on the machine’s mechanical precision and advanced wire transport and tensioning system,” explains Kiszonas. “And we’ve proven the savings in direct-comparison testing.”

A comparison test was recently performed between a DUO64 and a comparable model EDM at an end user shop that owned both machines. Each platform was compared in wire consumption, speed and accuracy. The workpiece tested was H-13 tool steel at 32-34HRc and measured 3 inches thick. Required geometries for the workpiece included a 0.500-inch-diameter hole with a ±0.0002-inch tolerance and a 40-microinch Ra surface finish.

Size 0.012-inch Versacut brass wire was used in both machines with top and bottom flushing nozzles sealed. Program settings for both machines were out of the box, unmodified code generated by the on-board programming systems. Settings were not adjusted by operators to optimize performance, and no operator intervention took place during the cut cycles.

Based on the required specifications, both machines performed equally in terms of accuracy and speed. Where the machines differed was in wire consumption. The DUO’s total machining time was 49 minutes and 9 seconds, on par with the other machine’s slightly faster time of 47 minute and 47 seconds.

Running at 2,000 hours per year, the second machine would use 2,320 pounds of wire, which at an average plain brass wire pricing of $5 per pound, equals approximately $11,600 a year. This means the other test machine costs $6,500 more per year to operate in wire cost alone. Over a five year finance-or-lease term, the DUO will save about $32,500 in wire expense in comparison.

On The Shop Floor

“It’s hard to believe there can be such a large difference between the wire consumption of two machines,” says Mr. O’Rell. “We’ve tracked a 30 to 35 percent reduction in wire consumption between our DUO43 and previous machines. It’s a relief not having to place wire orders every two weeks.” According to Mr. O’Rell, Vanderhorst Brothers Industries has also benefited from reduced scrap rates and more reliable auto threading capabilities.

Another shop, Hudson Technologies of Ormond Beach, Florida, reports similar results from their investment in a Makino WEDM. From October 2007 to October 2008, Tool Room Coordinator David Brennan recorded the wire purchases required to operate the company’s Makino and compared that to their previous machinery.

Hudson Technologies’ savings on wire has been only part of their success. The company states that both speed and accuracy have increased with the new wire machine, enabling them to stay ahead of the curve in challenging markets such as medical implants and electronics.

“The demand for accuracy has never been higher in many of the industries we deal with,” says Mr. Brennan. “By purchasing the Makino WEDM, we’ve lowered costs across the board with over 30 percent increase in speed, and surface finishes that no longer require any manual labor, let alone the four to six hours of polishing previously required.”

Similar results have been measured by Intricate EDM, where Mr. Frick, who has 20 years of EDM application experience, has been tracking wire consumption for several years. “The first significant change in wire consumption I experienced came when I purchased a Makino SP43 EDM in the spring of 2006,” says Mr. Frick. “Compared to previous machines, I was seeing a 30 to 35 percent reduction in wire consumption.

“In July 2008, I purchased a DUO43 and found an additional 10 to 15 percent reduction in wire usage even over the SP43. That’s more than 50 percent in total over my old wire machine. Our current measurements average between 66 and 68 hours of machining on one 35-pound spool. These wire savings have been produced without any loss of accuracy and a 40 percent increase in cutting speed compared to our previous equipment.”

“One of the greatest benefits of reducing wire consumption has been reliable unattended machining,” adds Mr.Frick. “During the day, I’m able to visit customers, gather additional quotes, respond to calls promptly, program more applications and handle other equipment. At night, the machine is typically set to run six to eight additional hours unattended, nearly doubling the shop’s productivity and significantly reducing machining costs.”

Intricate EDM runs unattended most evenings and occasionally through weekends. On a recent order, Frick was able to rough cut a set of 2.5-inch-thick steel parts over the weekend for 60 hours, using only one spool without any cleaning or other maintenance. All rough cutting was completed thoroughly and the parts were ready for finishing operations on Monday morning.

“Running unattended on my previous equipment typically resulted with a 4 a.m. trip to the shop or Saturday visits in order to maintain the machines and switch out wire spools,” says Mr. Frick. “Even with personal attention given to the machines, I would still often return on Monday to a partially completed workpiece. Today I’m able to get a full night’s sleep and fully enjoy my weekends.” Mr. Brennan also commented on unattended capabilities, stating that “by running unattended most nights and over some weekends, our lead times have dropped from 12 weeks to just 4.”

Looking back at the previous comparison testing, the results remain similar to those demonstrated on the shop floor. “As the test results demonstrated, the DUO’s unspooling rate of 0.51 pounds per hour provides 68.6 hours of machining time on one standard 35-pound spool of brass wire,” says Mr. Kiszonas. “The other test machine’s 1.16-pound-per-hour rate, which is typical for most wire machines, limits it to 19 hours of unattended machining using the standard 22-pound spool. The difference is 260 percent more unattended machining time available on the DUO. Even with a 44-pound spool option equipped on the second machine, it still only provides 55 percent of the unattended time.”

“Although wire consumption rarely appears as a topic of concern for most wire EDM users, the financial benefits of owning a low-wire-consumption machine is critical to your bottom line, as long as it doesn’t impact accuracy, surface finish or seriously hamper your machining speed,” says Mr. Frick. “In my 20 years of experience, wire consumption has become one of the most critical features in shopping for a wire EDM and an area where big savings can be had on the shop floor.”