For American Vulkan, having both a vertical and a horizontal ram on a large VTL is a critical advantage. The added flexibility enables the company to finish some of its biggest coupling components in one setup to a level of precision and surface quality not attainable otherwise.
#LargePartMachining 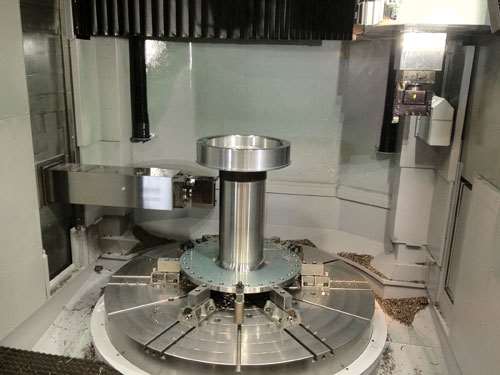 The horizontal ram on this VTL easily reaches surfaces between the wide flanges on both ends of the workpiece, which is about 40 inches tall.

One of the smaller couplings produced by American Vulkan is being prepared for shipment. The black rubber core between inner and outer steel rings provides the flexibility for smooth, secure and safe power transmission.

The You Ji vertical turning center is the largest machine at the company’s Winter Haven, Florida machining facility. It enables large, complex coupling production to be brought in-house. The machine’s vertical ram is commonly used to drill, ream and tap holes for precision fasteners.

A Firm Footing in Florida

Manufacturing is a major industry in Florida, a state most closely associated with tourism, retirement communities and agriculture. American Vulkan’s U.S. operation was founded in Winter Haven in 1971, and has thrived in this location.

For companies with large machine tools, one challenge peculiar to this area is constructing a suitable foundation in ground with a very high water table. Although all of American Vulkan’s large CNC machine tools are mounted on special, floor-level concrete foundations, the You Ji machine required excavating an 8-foot-deep pit and pouring a concrete base with an upper surface 40 inches below the surrounding floor. The foundation required 55 cubic yards of concrete and 350 reinforcing bars.

Knowing the importance of this foundation, Mr. Lehner contracted with SRD Construction & Development Corp, a local firm that specializes in the design and construction of concrete foundations for industrial equipment. This firm has considerable experience with soil conditions in this part of the country. For example, it provided a well point dewatering system to eliminate water intrusion and stabilize the soil. The foundation also required special sealing because the water table in this part of Florida is above the deepest part of the pit. To isolate this foundation from vibrations, a thick layer of foam material was placed between the ground and the concrete floor and sidewalls. For added stability, the machine is bolted down through epoxy into the concrete.