What Can 3D Printing Really Do?

And what will it mean for the future of manufacturing? “The Cool Parts Show,” a new video series from Additive Manufacturing, answers these questions with real examples. Watch the first season now.

Is 3D printing a real option for production? How is it being used to make end-use parts today? How will additive manufacturing (AM) change the way products are made in the future?

These are some of the questions that we at Additive Manufacturing, sister publication to Modern Machine Shop, seek to answer. Focusing purely on the technology and how it works doesn’t provide a complete picture of where AM is and what it can do, so we emphasize stories of real parts and users who are succeeding with 3D printing. 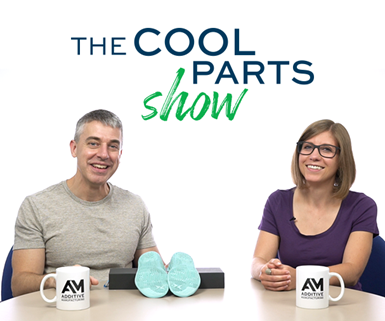 Mass customization — as illustrated by the 3D printed insoles shown here — is just one promise of AM explored on the show. Season 1 is now available to watch on our website and YouTube channel.

But, as they say, a picture is worth a thousand words — and we think a video is worth at least as much. That’s one reason why we’ve launched a new video series, “The Cool Parts Show.”

Hosted by me and Editor-in-Chief Peter Zelinski, each episode focuses on an unusual, interesting, and yes, cool 3D printed part. Every item we feature is either in production already or a proof-of-concept part that one day could be. In other words, these are real, viable illustrations of how 3D printing is used today and/or how it could change manufacturing in the future.

The show is intended to be approachable for all kinds of viewers, whether you’ve been using AM for years or are just now learning about it. The first season is available now, with episodes highlighting:

Watch the first season on our website or YouTube channel, and consider subscribing — you’ll be the first to know when Season 2 is released!

Another example of a cool part, showcasing assembly consolidation and improved functionality via AM. This 3D printed fuel injector contains an embedded motor that adjusts the orifices on the top to throttle the amount of fuel that reaches a rocket’s engine. Learn more in Episode 1.