The developer of Mastercam sponsors this contest each year to get students excited about CAD/CAM and the manufacturing process. 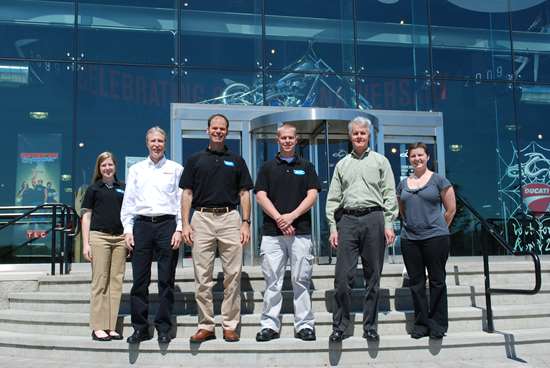 Justin Amos, a student in the Advanced Manufacturing Program at Vincennes University, won the 2009 Innovator of the Future Contest (IOF), sponsored by CNC Software, Inc., developer of Mastercam CAD/CAM software. Mastercam IOF entices students with a real-world manufacturing challenge, a celebrity judge, a chance to win scholarship money, plus a trip to the celebrity’s company. This year’s celebrity judge was Jim Quinn, Lead Engineer at Orange County Choppers, the Teutul family workplace made famous in the Discovery Channel’s American Chopper series. The challenge was to use Mastercam to design and machine a full-scale gas cap with an artistic feature. The part not only had to meet certain specifications, but also showcase creativity and innovation. Justin Amos’ design was chosen as the winner, and his cap featured an F-16 soaring over a compass with a spinning brass arrow.

Justin was one of those kids who hated school, but he knew he had to further his education so he enrolled in the nearby manufacturing program at Vincennes. Early this year, his interest was sparked when he decided to participate in the Innovator contest.

“I found it hard to be motivated in school, but the contest was great because it was real-world, we had a deadline, we got to create the whole concept ourselves, make it on our own, and I was really excited that it was OCC.

Catching the show once while the team built a jet bike is what inspired Justin’s design. He modeled the F-16 from an overhead view he found on the Internet and scaled it to size and said this project was by far the most complex part he has ever machined.

Justin won a $1000 scholarship and spent a couple of days on the East coast, touring OCC in New York and CNC Software in Connecticut.

“Both days were great. I saw the whole OCC shop Jim Quinn is just a real guy, very down to earth, and the work they put out amazes me. I got to see parts of the company that others don’t see. Hanging out with the creator of Mastercam, Mark Summers, was really cool, too. I was really impressed with Mark’s hospitality and had fun riding a Segway all around the company’s property.”

Justin’s career goal is to work in a shop making custom cars making original designs and prototype parts. He says he now enjoys engineering and learning how to make things come together. It will be very important for him he says to use his creativity and be challenged every day.