Smalley has won its eighth consecutive GM Supplier Quality Excellence Award, which recognizes the supplier’s performance in its work with General Motors. 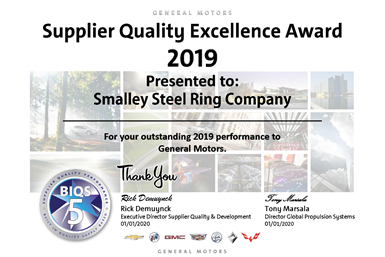 Smalley has received a General Motors Supplier Quality Excellence Award for 2019, the eighth consecutive year in which the company received this award.

“To be recognized for our commitment to quality, customer service and engineering excellence is a great honor,” says Jamie Madison, Smalley’s Director of Quality Engineering. “We strive to be a trusted partner to GM and the global automotive industry, so to receive this award for eight consecutive years is a great confirmation of our efforts and position as an industry leader.”

Smalley says its retaining rings and wave springs have been an integral part of the automotive industry for over 100 years, appearing in components as diverse as steering systems and electric motors. The company manufactures its products in compliance with ISO 9001, IATF 16949 and ISO 14001.