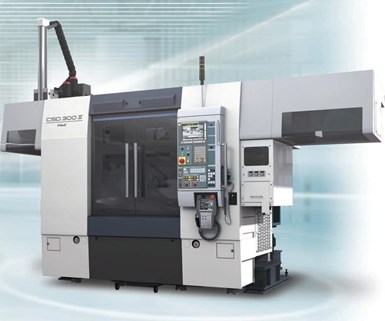 Fuji Machine’s CSD-300II front-facing twin-spindle lathe is said to achieve greater productivity than its predecessor, the CSD-300, with the help of faster robot traverse and turret indexing speeds. Turret index times are as low as 0.19 sec., with robot cycle times of 17.9 sec. and loading times of 4.8 sec.

The horizontal lathe is equipped with dual-gantry robot and FANUC control. In addition, the CSD-300II features an improved custom human-machine interface and a single integrated FANUC control panel that allows for more convenient operation and setup of the machine and robot, according to the company. A clamp/unclamp switch are included for the robot chuck and the robot’s centralized lubrication system.

The CSD-300II accurately manages heavy parts (5+5 kg) up to 200 mm in diameter and 100 mm in length. The lathe also features a hydraulic clamping loader and 8"- to 10"-capacity chucks. An optimized bed design with a grooving width of 14 mm provides rigidity.

Available as an option, Fuji’s Lapsys desktop software reads scanned laser etchings to trace the origin of a part, including machine and spindle, and enables part traceability, predictive maintenance and remote operation. 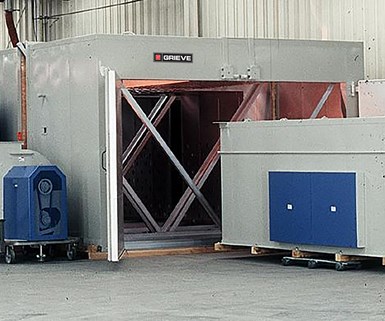 Grieve’s No. 976 is a 500ºF (260ºC) electrically heated jumbo walk-in oven is used for heating molds. The Incoloy-sheathed tubular elements heat the oven with 360 kW of power, while two 20-hp recirculating blowers provide 49,000 cfm of airflow to the workload.

Oven controls include a 13,500-cfm powered forced exhauster and other safety equipment required to handle up to two gallons of flammable solvent at 370ºF (188ºC). Other features include a digital programming temperature controller, SCR power controller, and motorized dampers on the intake and exhaust for accelerated cooling and rapid purging. This walk-in oven meets NEMA 12/NFPA 79 electrical standards.

The Walter Helitronic Raptor from United Grinding is designed for grinding and resharpening rotationally symmetrical tools for the metal and wood industries. 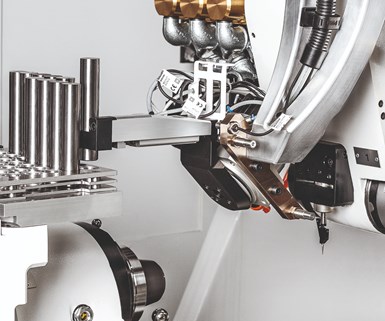 The Walter Helitronic Raptor from United Grinding is designed for grinding and resharpening rotationally symmetrical tools for the metal and wood industries. The machine is said to be well-suited for shops that do not require features such as automatic tool support systems or automatic grinding wheel changers but still need a high degree of flexibility in the working area for diverse types of tools.

The Helitronic Raptor has a 15.4-hp (11.5-kW) spindle and a work envelope that can accommodate tools ranging to 12.6" (320 mm) in diameter and 11.0" (280 mm) in length, including end face operations. The machine is equipped with Walter’s Helitronic Tool Studio CAD/CAM software for tool design, part production and resharpening tasks.

Mitutoyo America has released the new M2 2D processor as part of a package with the PH-3515 profile projector. 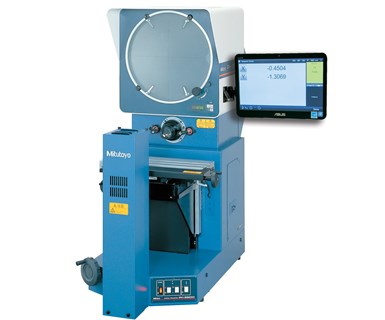 Mitutoyo America has released the new M2 2D processor as part of a package with the PH-3515 profile projector. The M2 2D processor updates the PH-3515 with a touchscreen tablet and easier 2D processing for measuring dimensions. The M2’s graphics-based part view constructions enable the user to generate distances and tangent lines from within the graphical part view. The user can measure features, set nominals, apply tolerances and view deviation results in a few clicks for geometric tolerancing. Edge detection is optional. The M2 also provides flexible reporting capabilities, enabling customized report data and format including header, footer and graphics.

The PH-5415 features a 14" horizontal projector screen. The projector is equipped with accurate linear glass scales. Other features include profile and fiber optic surface illumination; a 10" × 6"-travel T-slot table for accessories; and a built-in digital angle counter. 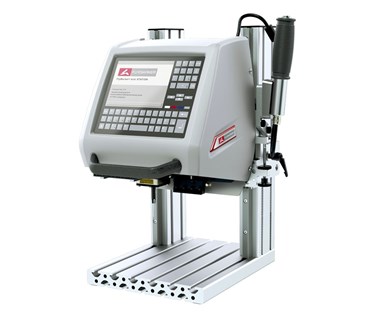 Rocklin Manufacturing has added the electromagnetic Station 120-V tabletop marking unit to its FlyMarker Mini series of portable, battery-operated marking devices. The all-in-one unit from Markator features a capacitive touchscreen for ease of programming characters with heights ranging from 1 to 100 mm. Its large marking window (120 × 100 mm) and adjustable force settings deliver permanent dot peen marks on materials ranging from plastics to hardened steel (up to 63 HRC). The unit automatically adjusts to round or uneven surfaces by up to 5 mm height differential. Stronger force settings are designed to withstand surface treatments such as galvanizing and sandblasting.

Marking files can be transferred via USB or Ethernet or simply programmed and stored on the unit itself. Auto-numbering, time and date stamps, letters, numbers, and characters all come standard, with logos and data matrix codes available as options. An integrated laser pointer coupled with a preview screen delivers a clear simulation of the proposed mark to eliminate errors.

The FlyMarker Mini Station is designed for rapid tag marking and various other stationary marking needs. However, for those who desire greater flexibility, the device can be converted from a fully portable unit into a tabletop unit with a solid column frame.