By automating tasks that require lesser skills, Hy-Tech was able to increase throughput and use its operators to their fullest potential.

The FANUC M-20iA robot is surrounded by interlocked perimeter guards to ensure operator safety. Steel slugs are loaded on an in-feed conveyor and finished parts are placed on the outgoing conveyor to reduce dead time.

The automated system turns and mills the steel slug on the right to make one of the 11 critical impact hammer components, shown on the left.

A key benefit of the automation system is its flexibility, says Bill Ober. He can run 50 to 500 pieces of any one of the 11 configurations in the family of impact hammer components and then quickly change over to another part simply by replacing the chuck and the robot gripper and then calling up the new program.

Finding skilled workers to bring on board has become a challenge for many manufacturers. This was the case at Hy-Tech Machine. Adding to that problem was the fact that the skilled employees it already had were spending their time handling material, loading and unloading parts, and completing other tasks that were not the best use of their talents. By automating some lower-skill-level procedures, Hy-Tech was able to improve throughput and use its employees to their fullest potential.

Pittsburgh, Pennsylvania-based Hy-Tech Machine is a 90-year-old company that employs 60 individuals to perform turning, milling and grinding operations on 38 CNC machines in its 50,000-square-foot facility. The company produces a comprehensive line of impact wrenches and other industrial-grade pneumatic tools, as well as replacement parts for a variety of brands.

Industrializing AM: A Simple Cost Equation

3D Printing, Generative Design Put This EV on a "Diet"

In an effort to reduce setup time and operator involvement, Bob Ober, Hy-Tech president, turned to his long-time Okuma CNC machine dealer, Morris Great Lakes, for a solution. According to Mr. Ober, adding automation was a big investment for his company, so it was important to work with a dealer that would listen to what the company needed before it came up with an automation approach. Working together, they decided that one particular job, turning and milling 11 critical impact hammer components, was a good candidate for automation because the parts are complex and they share the same configuration and machining characteristics that make automation a good option. Once they decided on the part family, Morris Consultant John Rodgers recommended a multifunction Okuma Multus turn-mill and brought in Gosiger Automation, the integrator that supports the North American Okuma distributor network for automation applications, to design the robotic-based system.

Gosiger’s plan was simple: It combined a flexible and multifunctional Okuma Multus B-300 CNC turn-mill with a FANUC M-20iA six-axis industrial robot and a fixtureless conveyor system. Instead of using skilled workers to load and unload steel slugs from the machine, Gosiger positioned the robot directly in front of it, while still allowing the operator to have access to the machine. Interlocked perimeter guards surround the robot work area to ensure worker safety. To accommodate the amount of material removed from steel slugs during the machining processes, the robot is equipped with a dual gripping system. This enables it to reliably handle the part both before and after each machining cycle. Using the FANUC IRVision system, the robot arm locates and grips the steel slug, which sits on an incoming conveyor, loads the slug into the machine’s main spindle chuck, unloads the finished part from the subspindle chuck and places it on the outgoing conveyor belt. The robot then closes the machine’s door before the next cycle begins.

A key benefit of the automation system is its flexibility, Mr. Ober says. He can run 50 to 500 pieces of any one of the 11 configurations in the family of impact hammer components and then quickly change over to another part by simply replacing the chuck and the robot gripper and then calling up the new program. “All of the tooling resides inside the machine’s automated tool changer, so we don’t have to worry about that aspect,” he says. Operators can even interrupt a part run to make a different part, and then resume the original run.

Using this automated production process has enabled Hy-Tech to reduce cycle time from 32 minutes to 21 minutes on its largest volume part, with similar savings being realized on all parts run through the machine, Mr. Ober says. While the machining center benefits the company in terms of reduced cycle time, increased throughput has become a cornerstone. Since automating its manufacturing process, one machining center produces as many parts as the company previously ran on three machines—and with no operator intervention. The ability to operate unattended even enables the company to run a lights-out shift with nobody in the building.

“What we’ve really done is eliminate a lot of dead time for our people so they can accomplish more, plus we have greater consistency and better quality parts,” Mr. Ober says. “We’re now in the process of expanding the number of SKUs from the original 11 parts to 40, and looking forward to a second multifunction turn-mill installation.” 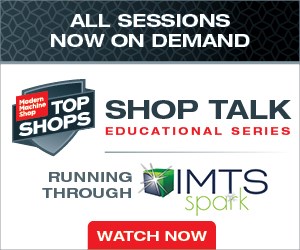