CNC Machine Shop Reaps Benefits of Hiring an IT Person

A database guru combined off-the-shelf technology with an elaborate proprietary shop management software to drive efficiency throughout all areas of a machine shop.
#topshops 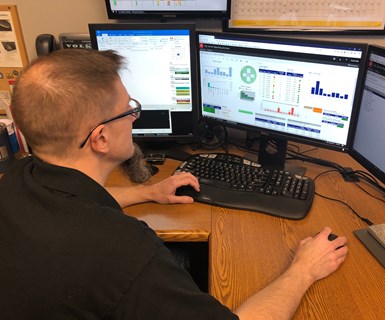 Scott Volk has developed a central shop management system for MetalQuest in which there is just one point of data entry for a process change. All associated information about the change is then automatically pushed to all other relevant applications.

In a nod to production machining’s roots, the foyer at MetalQuest’s Hebron, Nebraska, facility includes equipment such as a lathe, a drill press, a grinder — even fans — connected by belts and driven by a central rotating power source. That’s old-school manufacturing connectivity.

Beyond the foyer, one can find evidence of a more advanced form of connectivity. This is a shop driven not by belts, but by software. More specifically, it is driven by a proprietary shop management system developed by a database expert the shop hired in 2002 to streamline all aspects of the operation by connecting machine tools, inspection equipment, tool vending systems, tool presetters and enterprise resource planning (ERP) software.

Scott Harms started MetalQuest in 1996. Early on, Mr. Harms looked to diversify his then 3,840-square-foot shop from others. The first machine was a three-axis CNC lathe to perform turning and milling operations, and that type of multitasking capability became the shop’s s niche. “At that time, most shops were still using a mill and two-axis lathe to complete parts” he explains. “Now, we have just one two-axis lathe in our tool room. All others have some combination of subspindle and live tooling to potentially machine parts complete.” 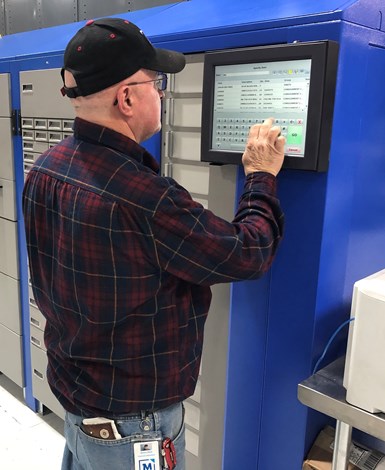 The shop has since expanded to 51,000 square feet and has a dedicated assembly department with high-bay storage area for a valve product line it manages for one of its customers. MetalQuest also has 13 FANUC robots and performs its own automation integration, purchasing robots directly from the manufacturer.

Scott Volk, vice president and COO, came on board in 2002. He was introduced to Mr. Harms by a mutual vendor who suggested that MetalQuest could benefit from Mr. Volk’s manufacturing management and database skills. “We weren’t quite sure what his role might be here,” Mr. Harms jokes, “but recognized his talent and hired him. We knew we’d figure it out.” 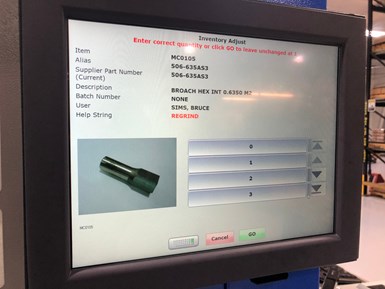 Various consumables can be stored and tracked in the shop’s tool vending system, including re-ground cutters.

What Mr. Volk developed is a central shop management system with a single point of data entry for a process change, such as adding a new type of cutter. All associated information about the change is then automatically pushed to all other relevant applications.

This shop management system has morphed and changed so much over the years and touches on so many company departments that any effort to create an orderly timeline chronicling its evolution quickly falls apart. However, the first project Mr. Volk took on for the shop that set him on course to what would become this shop management system was exploring opportunities with a tool vending system.

Tying It All Together

Mr. Harms says he had looked into this vending system at IMTS 2000 to enable more efficient and accurate consumables management. “We initially thought that it was too costly for a shop of our size,” he explains. “Then, when Scott and I visited IMTS 2002 together, we decided to pull the trigger and get one.” They soon realized that the value of the misplaced tooling scattered throughout the shop (that they eventually found) surpassed the vending system’s price.

The value of misplaced tooling surpassed the vending system’s price.

Mr. Volk then considered how to pull data from the vending system in order to automatically develop job setup sheets. He prefers to work within an SQL relational database. At the time, the vending system used a different type of database, but Mr. Volk was able to convert it into SQL. The resulting app, called JobControl, enabled communication between the vending system and JobBoss ERP software to create setup sheets and ensure that machine operators as well as purchasing department and tool crib personnel all use the same information. 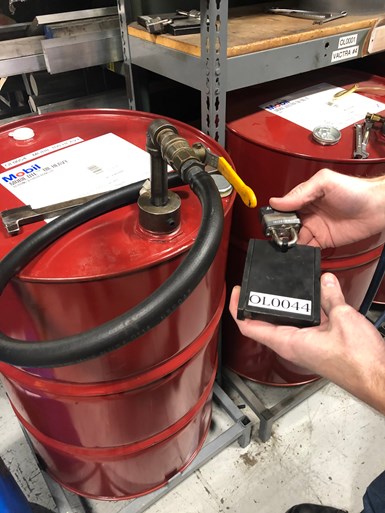 A key stored in the vending system is needed to open a lock on individual drums to access the coolant inside.

Operators are able to pull only the tools assigned to a given job on a setup sheet from the appropriate bins in the vending system. Plus, all components and spare parts that make up a given tool are defined. This might include insert screws, clamps or shims. Component inventory is tracked to enable automatic reorder of additional tooling when quantities reach a certain level.

MetalQuest has since added additional vending system units. Plus, it uses these vending systems for more than just tracking tooling.

How do you fit a 55-gallon drum of coolant into a vending system?

They are also used to track consumables such as coolant purchased on consignment. But how do you fit a 55-gallon drum of coolant into a vending system? You don’t. But there is room to store the key for the lock on that drum. Likewise for cardboard boxes stored in a locked storage room. Each withdrawal is tracked, and each week a report is automatically generated and sent to the consignment suppler. Nobody needs to remember to do this. 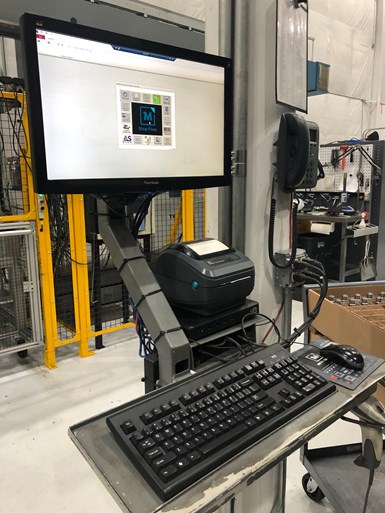 The shop uses its ERP software for entering sales orders and creating purchasing orders and packing slips. All of that information is visible in the shop management system, too. For Mr. Volk, it might be more efficient to access that information there. However, it might be easier for others to access it directly in the ERP software. Job scheduling is performed using software called JobPack. Mr. Volk appreciates this software because it works with all ERP software. Plus, it makes it easy to feed data into other systems, or other systems can pull data (such as delivery dates) from it.

Initially, the shipping department used spreadsheets to track incoming material. Now, this is all tracked in the shop management software. Connection with the ERP software ensures operators know what material is tied to what job. Similarly, an inventory app developed by Mr. Volk shows what material heat numbers are available for the job when the operator scans a barcode on the material.

Dashboards such as this in the shop management system provide overviews of the status of all machines in a given department on the shop floor. (Image: MetalQuest)

At this point, material imperfections can be identified and tracked. For example, an operator could identify pattern shifts in a few raw castings. When the parts are removed from available inventory, the quality department automatically receives an alert that those castings were deemed to be scrap. Quality personnel can verify the problem with the castings and sign off in their own software app. Then, at the end of the month, the purchasing department receives a report listing scrap for each vendor and sends a note to vendors asking if they would like MetalQuest to send the material back or scrap it. The exact purchase price for the material and any surcharges are known so the shop is credited for the true cost. 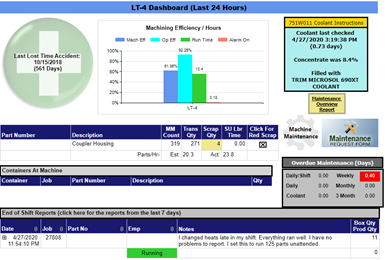 Other dashboards enable managers to drill down to see the status of individual machines. (Image: MetalQuest)

Over the years, MetalQuest has largely settled on Okuma CNC machine tools. It was an early adopter of initial iterations of the company’s machine monitoring technology. The shop also provided feedback over the years as Okuma developed its machine monitoring capabilities. Mr. Volk currently uses the latest iteration, Connect Plan, to pull machine data into his software for analysis.

He created dashboards in his software to see overviews of the status of all machines on the shop floor as well as those that drill down by individual machine. This is different from standard machine monitoring software because it is pulling data from various software and equipment, not just machines. Machine dashboards show information such as machine efficiency, part currently being run, part count, estimated parts produced per hour, actual parts produced per hour, setup time and scrap. 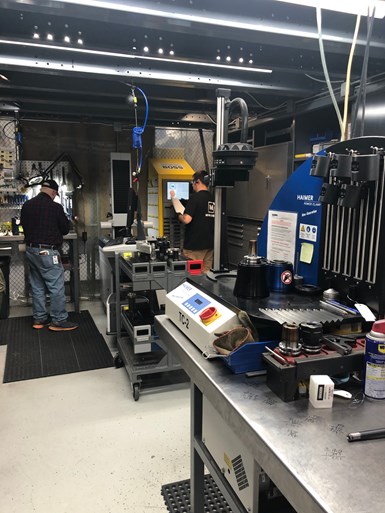 Older vending units are being redeployed to other areas of the shop, such as its tool crib.

A review of machine maintenance history can also be performed. Operators can input maintenance information — when coolant was checked, what the coolant concentrate level was, etc. — directly at the machine control. If maintenance is overdue, operators are alerted upon starting the machine. They can also alert maintenance personnel if a problem has developed. This automatically creates a maintenance ticket, too.

Hire an IT Expert?

Mr. Volk continues to refine the shop management system. Many improvements result from walking the shop floor to hear employees’ problems and learn what bottlenecks could be opened by new functionality.

He believes it’s valuable for shops to have someone on staff who can perform software integration in the way that he does at MetalQuest. Not only can it make the shopfloor more efficient, but it can make the front office more efficient, too. Much of this is due to elimination of manual data entry and automatically pushing and pulling data between various disparate systems. The time savings can be huge as can the ability to readily detect problems. Plus, it’s likely easier to find a talented IT person than it is an experienced machinist.