DMG MORI Invests in the Future by Providing Integrated Solutions

During a recent open house event at DMG MORI’s factory in Pfronten, Germany, the company highlighted advances in digitalization as well as automation and additive manufacturing. 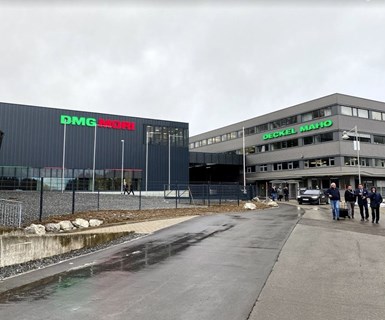 If there’s one takeaway I garnered from attending DMG MORI’s recent open house event in Pfronten, Germany, it’s that the company is investing heavily. It’s investing in its facility, its consolidated product line, and three key technologies that show promise in moving manufacturing into the future.

The event, which took place February 11-15, was well attended by the trade press and customers despite a travel ban with China due to COVID-19 (Coronavirus) and high winds canceling many flights across Western Europe. Attendees were able to see 45 innovative machines and 15 automation solutions. The four world premieres included the DMU/DMC 65 H monoBlock universal horizontal machining center, the modular PH Cell pallet system, the Lasertec 400 Shape for laser texturing and the Lastertec 30 Dual SLM for additive manufacturing.

During the event, DMG MORI announced that its sales in 2019 hit a new record high at roughly 2.7 billion Euros. This is a 2% increase compared to the previous year. Earnings and free cash flow also reached record highs. Despite recent economic challenges faced by the world market, the company invested roughly 20 million Euros in its Pfronten facility in 2019, and it plans to invest “a double-digit million amount” in 2020. 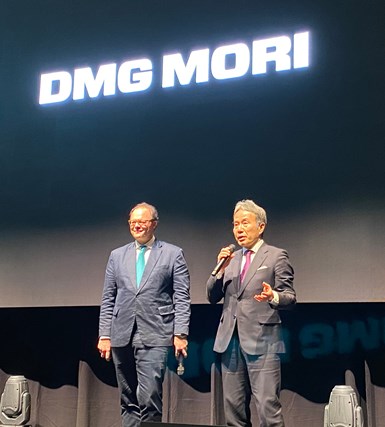 On the left, Christian Thönes, chairman of the Executive Board of DMG MORI AG, and Dr. Masahiko Mori, company president, speak during a press conference at the event.

Christian Thönes, chairman of the Executive Board of DMG MORI AG, addressed how the company is dealing with increased customer demands during the event’s press conference. “In the future, we will be challenged with increasing production efficiency along the whole product line,” he says. “We’re rethinking our services with new tools, including a new customer portal. Moreover, we have to think about the whole process. DMG MORI wants to be a holistic supplier, and this starts with digital.”

Dr. Masahiko Mori expanded on that sentiment by saying that formerly, the company’s focus was solely on the machine. But in the future, it plans to offer improvements in productivity across the entire shop floor and across the whole process chain.

DMG MORI sees industrial digitalization as becoming increasingly important in the machine tool industry. To that end, the company says it is devoted to continuous development in the following products and services. 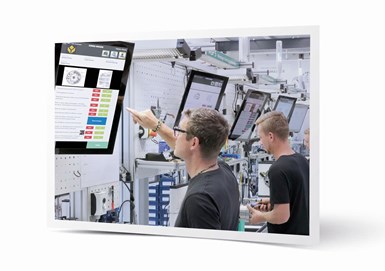 Using Tulip technology for spindle production at the Pfronten facility, DMG MORI was able to increase productivity by 20% and reduce the error rate by 10% in just a few weeks. Photo: DMG MORI

Another highlight in digitalization was the use of Tulip software in various locations throughout the Pfronten facility. Tulip is the software of a U.S. startup in Boston that enables users without programming knowledge to create their own apps quickly and intuitively. Each step of a process can be described and visualized on the Tulip platform using existing or self-created apps just like a modular script. It creates an interactive roadmap that prompts employees to carry out measurements or tests at key control points. According to DMG MORI, when the Pfronten facility began using Tulip for its spindle production, it increased productivity by 20% and reduced the error rate by 10% in a few weeks. 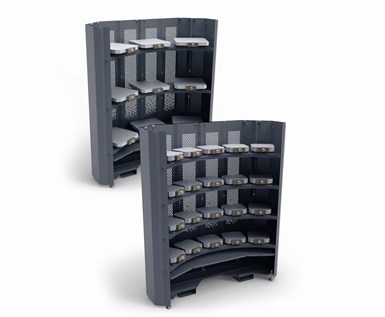 A second shelving unit can be added to the PH Cell to provide storage space for as many as 40 pallets. Photo: DMG MORI

Automation also played a large role at the event. For example, the world premier of the PH Cell pallet system was displayed on the DMU 65 monoBlock. This modular automation system will be available on the DMU 50 third generation and the DMU eVo series in May, followed by July availability with the duoBlock models, the CMX U universal machines, and the DMC V and CMX V VMCs. The system can accommodate as many as 40 pallets of different sizes: 500 by 500 mm, 400 by 400 mm and 320 by 320 mm. It is designed so that numerous machining centers can be connected.

Pallets on top of AGVs move the assembly of the monoBlock series along the factory floor in a series of switchbacks before it leaves the facility complete. It is estimated that assembly will reduce from 11 to seven days on this new line. Two employees – one mechanical, one electrical – will work at each station to assemble these machines.

Another investment DMG MORI made to the facility is a new logistics hall and an expansion of the assembly of the monoBlock series by 1,200 square meters. During our facility tour, we saw the “Excellence Factory monoBlock,” which will soon be ramped up with a new assembly concept: The machines will be manufactured on automated guided vehicles (AGVs) in a flow assembly process.

A closeup of the QR codes used by the assembly line AGVs.

The AGVs move across the floor guided by a strip of QR codes at a rate of roughly 45 mm per minute. Due to this slow speed, the assembly line is constantly moving, enabling the company to produce a complete model mix on one line. The line starts in the upper-right-hand corner of the facility floor, making several switchbacks before complete assembly and exit through the lower-right-hand corner. Tulip technology is also implemented in this assembly concept. According to DMG MORI, the AGV flow assembly is a highly efficient processes designed to ensure a sustainable increase in productivity. 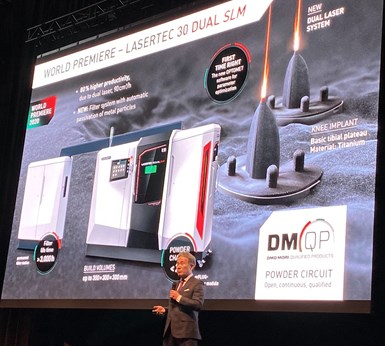 Dr. Mori says that while the market for additive manufacturing is relatively slow, it is growing. The company sees this technology as an area of opportunity.

During the event, I also learned about DMG MORI’s commitment to additive manufacturing. The world premier of the Lasertec 30 Dual SLM powder-bed system highlighted the machine’s﻿ precision optics module that has two 600-watt lasers. The lasers can build one component together or several workpieces in parallel to increase productivity by as much as 80%.