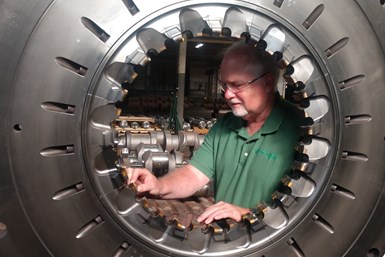 In one particular application, OCCO was machining locomotive and tugboat crankshafts from steel forgings that measure between 95-165 inches long and range in weight from 2,000-6,200 pounds. Machining one shaft would take between 4-6 hours with one shaft machined per two indexes of the triangular carbide inserts. “We really felt there must be a more efficient way to do this,” says Greg Stem, OCCO’s director of engineering. “We’ve worked with Greenleaf for a long time, so we talked with them about potential solutions for this application.”

Greenleaf Corp. and OCCO worked together to improve productivity on this crankshaft machining application.

“Special tooling is one of Greenleaf’s greatest areas of expertise, so we started working closely with the engineers at OCCO,” says Denny Carpenter, sales and service engineer for Greenleaf. The cutting tool supplier altered the cutter bodies to encapsulate a segmented design, which allowed for more insert pockets. This meant the machine could apply 25% more inserts — which Greenleaf also altered from their original triangular design, in addition to boosting their total to 48 — to the parts, resulting in faster feed rates. The heat and wear resistance of Greenleaf’s GA5036, a CVD-coated carbide grade, made it well suited for high-speed milling of the forged steel. Additionally, OCCO mechanically upgraded its American GFM model FKP45 crankshaft milling machine to allow for higher cutting speeds.

These improvements reduced OCCO’s cycle time to under two hours, with four shafts machined per index of the carbide inserts.