Hope Is an Asset: Here Are Machine Shops Following Clear Visions for the Future

A simple strategy offering a clear aim to hope for is particularly valuable during a disruptive time. Recently posted articles offer examples of shops following clear ideas for the way ahead.
#zaxis

I begin with a statement of the obvious: Things don’t always go as planned. For all of us, in all our different walks, unexpected developments have defined our year.

For example, this month’s issue of Modern Machine Shop magazine would have been our semi-annual special issue devoted to the International Manufacturing Technology Show (IMTS). For as long as I have been with MMS and well before that, the magazine has always done the August issue of even-numbered years the same way. We devote the issue to practically nothing else except coverage of products and technology to be seen at IMTS. But this year, as you almost certainly know, the show was canceled due to concerns related to the novel coronavirus, the first cancellation of this enormous event since World War II. Thus, our IMTS issue was canceled as well. We changed plans. Rather than an issue about IMTS, we decided instead to publish an issue about hope. Read on for links to articles we included in this issue.

But first, there is an aphorism about the limitations of hope that I expect you’ve heard: “Hope is not a strategy.” That hard-nosed, oft-repeated statement is true as far as it goes. Hope and strategy are different; anticipating a positive outcome offers no capacity on its own for raising the chance of that outcome coming about. Something more is needed. Strategy involves a vision for the future — the future of a business, say — and it involves defining that vision clearly enough so that tactics can be chosen or rejected according to how well they move in that vision’s direction.

Yet let me offer a corollary, one of the lessons 2020 teaches us if we can learn it: Overthinking is not a strategy, either. Too much has happened this year for even the most clear-thinking among us to be able to process it all. The factors still unfinished include the spread of a virus not well understood, societal response to injustice and economic transformations of which the full extent is yet unseen. “Overthinking” is not really that because, if done well, I am not sure one can do too much thinking. What I believe we really mean by “overthinking” is over-assuming — locking in too tightly on one particular expectation or framework for how events will or must proceed, and rationalizing within that framework, when in fact the set of events we are in the midst of right now is too big and too detached from precedent for us to be able even to choose the framework with confidence. Right now, a valuable skill is the ability to detach from assumptions, whether they come from hope, habit or point of view, and simply evaluate what the facts seem to be saying week by week. Among the most powerful statements a leader can make now is the admission, “I don’t know.” As in, I don’t know what will happen next month — there are various possibilities — but I do know where we are headed in the next few years. Strategy entails vision, and particularly in a year like this, that vision should be simple and clear. 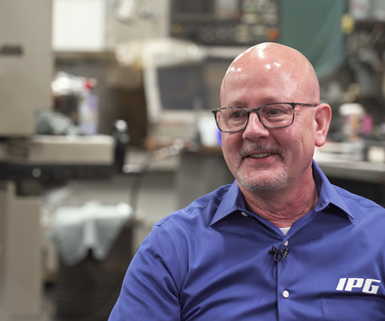 Indiana Precision Grinding is one of the shops with a vision for the future we’ve covered in a recent article. This image is a still from a video I filmed with the shop’s leaders, Dave Cox (pictured) and Matt Cox. Watch it here.

With this in mind, we have gathered examples of machining businesses pursuing clear, simple visions. Indiana Precision Grinding is one; this company was founded as a job shop, but its way forward now, in response to the changing market its leaders see, is to become an aerospace industry specialist. Meanwhile, 3rd Dimension Industrial 3D Printing is a additive manufacturing company whose strategy has involved becoming a machining business. 3D printing as a production process is stronger when machining can complement it and even sometimes provide an alternative. And then there is the story of Dan’s Custom Machining, the story of how a simple vision pursued for years — the vision of becoming an independent shop owner — was at last realized.

There is more. Other current stories arise directly out of this unusual year — stories of seeing the facts on the ground clearly and responding to them, even when that response leads to an unexpected place. Machine tool supplier Mazak became a manufacturer of disinfectant machines. Machine tool supplier Hurco explored the possibilities of insourcing N95 mask-making. And contract manufacturer NRL & Associates leaned more heavily than ever into unattended production as a way to produce needed ventilator components.

Plus, perhaps the most notable example of both continuing in hope and arriving at an unexpected place is this: The spirit of IMTS continues, thanks to new experiences launched into the space it leaves. The show cannot be replaced, but parts of its essence, energy and scope are being marshaled into two new digital platforms created in recent months: the IMTS Network and IMTS Spark.

Hope is not a strategy? No, it’s not. But hope is among your most valuable strategic assets. This year, you do not necessarily have knowledge to the extent you once did. What you predict for the course of the next few months or the next year will be more of a guess than usual. And in the absence of knowledge, you don’t want to found the way forward upon fear. What you likely do have are new insights or a new perspective earned this year, and perhaps even some new opportunities. Couple these to a clear, simple vision for where you want to go and who you want to be. Hope is the assurance that says: Despite the disruption, despite challenges, we are going to get there.