CNC machines can do more than we think. They are automation platforms for insourcing.

Greg Volovic, president of machine tool supplier Hurco, gave a challenge to engineering staff members at the company’s Indianapolis headquarters: Within four weeks, adapt a machine tool into a system for making N95 masks for virus protection. It didn't have to be an optimized system — refinement could come later — but he asked for a system that could make the mask (sans straps) complete. The challenge was met, so Hurco is now theoretically self-sufficient for N95 mask production. Capacity allowing, the company can make masks for its customers, employees and distributors. And in developing this capability, the company says its team was witness to one of the perils of offshoring: the way that knowledge gets offshored, too. Paul Gray, PhD, VP of R&D and product development, says one of the project’s challenges was just to re-learn how N95 masks are made. Unable to find procedures for how to make an item now largely produced overseas, team members were left to disassemble existing masks as part of their effort to find out. 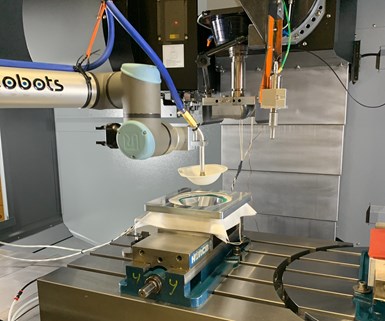 A mask is removed from the machine at the end of an automated process for forming, welding and cutting. After Hurco made the mold for a customer’s mask-making machine, the company realized it could become its own N95 mask provider.

They know now. The process they developed uses a Hurco five-axis vertical machining along with an automation system from ProCobots that employs a Universal Robots cobot, plus a heated mold for shaping the mask. The cobot loads a stack of four plies, two polymer outer layers and two spun-fiber filter layers, and these become a mask through a five-minute cycle involving molding, welding and cutting. Manual assembly adds the straps and nose clip.

The project started with a customer. Boyce Technologies (our sister publication, ﻿Additive Manufacturing, has covered them) won a contract from New York state to create a machine to make N95 masks. Boyce is a long-time Hurco user, so the machine tool maker supported the project by making the mold. Hurco then made a second mold for its own use. Hurco wouldn’t be building a dedicated mask machine like Boyce, but it could make a flexible mask machine using its own technology.

Most of the elements of the mask-making process are visible in this image. Ultrasonic welding is underway here. The collaborative robot waits, its fabric cutting tool (like a pizza cutter, currently held horizontally) at the ready.

Mr. Volovic says the project serves to demonstrate the scope of what a machine tool can do. The CNC machine is not just a device for cutting metal, but a platform for automated systems in general requiring precise motion control. That insight is potentially all the more important as companies increasingly look to themselves to supply products that, in the past, would have come from suppliers or supply chains recently revealed to be fragile.

Rather than metalcutting, the VMC in the mask production system applies ultrasonic welding. The fact that plies are joined this way is an example of an insight Hurco deduced rather than finding it explicitly stated, Dr. Gray says. The ultrasonic welder came from Herrmann Ultrasonics, and the machining center’s WinMax CNC made it easy to incorporate this device as an accessory under CNC control, Mr. Volovic says. Cutting is actually done by the collaborative robot, manipulating a fabric cutting tool suggestive of a pizza cutter.

Watch this video of the process: