There are many digital calipers specifically designed as depth gages. They share some common features but come in a variety of styles. Here are several to consider.
#qualitygagingtips

The first depth gages consisted of a simple scale with a sliding perpendicular beam as the reference. As the need for higher resolution and precision increased, these were largely replaced by Vernier devices and micrometer depth gages. Today, both Verniers and micrometers have been replaced by digital versions of the depth gage, offering long measuring range and versatility.

The most common caliper-style depth gage is based on a 6-inch/150-mm caliper that has a depth rod or bar built in. The end of the caliper can be used as a reference stop, but adding the accessory depth bar fixture to the beam of the caliper can magically extend the capabilities of the run-of-the-mill 6-inch caliper to a fully functioning and perfectly adequate depth gage.

The fact that a depth gage is based on a modern caliper gives it a lot of capabilities. Most modern calipers have features that are inherently standard. These features include a reference system built into the scales by which the display turns on with the slightest movement and never forgets its last reference setting so that the gage can be picked up and used immediately without having to be re-zeroed. Calipers are protected against high levels of liquids and dirt. And finally, these calipers often are provided with some form of data output capability, whether through a wire or integrated wireless transmitter, for data collection.

However, there is a range of calipers that have been specifically designed as depth gages, sharing the same type of reference bar as their cousin, the dial depth gage, but offering more capacity and capability. These portable hand tools start at 1 inch (25 mm) in length and can be designed to span 24 inches (600 mm) or more. 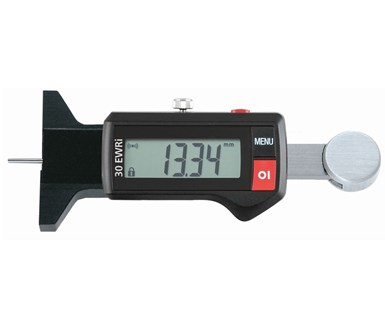 Portability is the claim to fame for the small and valuable depth gage seen in Figure 1. About the size of a classic flip lighter, the device generally has a 1-inch (25-mm) measuring range. It fits perfectly in a pocket, ready to travel around the shop with their owner and check a part on the fly, ensuring a fixture is set correctly or performing any number of other useful checks. Its 0.08-inch (2-mm) rod contact also makes it easy to check the depths of some pretty small holes.

The type of double-hooked depth gage shown in Figure 2 has a pair of flats on the measuring end — one facing down on the measuring beam and a second opposite it facing up. These are ground to be on the same plain, giving the gage the unique capability of measuring opposing surfaces for distance while having to zero only on one reference point. Thus, if you need to measure, for example, the width of a groove cut into an inner diameter or the distance between two grooves, this double-hooked depth gage is the solution. 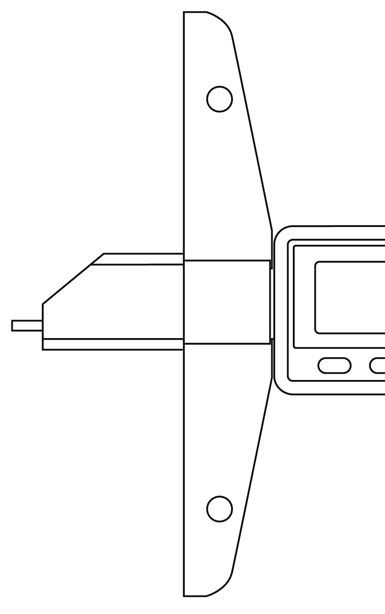 Probably the truest of depth gages is one in which the whole beam of the gage acts like the sensitive contact, as seen in Figure 3. These gages can be provided with capacities of up to 20 inches (500 mm) of depth. For such depths, the beam of the caliper, which acts as the measuring contact, adds a degree of stiffness to ensure that any flexure that may influence the measurement is kept to a minimum. While the end of the beam is tapered and has a small enough surface to act as a reliable measuring contact, it also has a small mounting hole for a 0.060-inch- (1.5-mm-) diameter contacting pin held in place by a locking screw. This feature allows the beam (with contact pin in place) to find and measure small dimples of bottom grooves cut into a blind hole, for example. 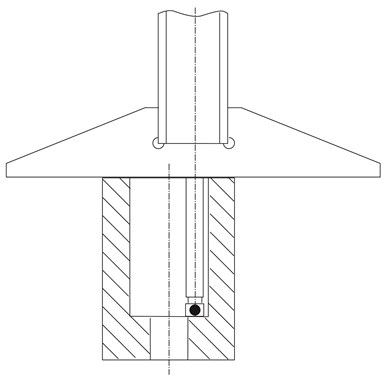 Another class of depth gage, as seen in Figure 4, is designed for small holes. These employ a fairly substantial depth rod, which slides out of the depth beam. This rod is large enough in diameter to allow for exchanging contacts having a 2.5-mm thread, which is common for many gaging applications. Thus if one needs to measure down into a deep, small-diameter hole or a narrow land in a deep hole, this may be the style for you. With a disc-shaped contact, even groove location can be measured. However, don’t forget to take into account the thickness of the disc contact when making a groove width measurement.

There is a class of large depth gages (20 inches/500 mm) that are pretty robust, equipped with an interchangeable shoe that acts as contact rather than screw-in contacts or pins attached to the beam. A standard shoe, such as the double hook, allows it to function as noted above. But there are shoes to allow measuring of wide recesses and grooves, small bores, offset measurements outside the center of the bore, or narrow front recesses, grooves and concave points, as seen in Figure 5. These large depth gages also have optional bridge extensions for broad-based support on large workpieces and for offset measuring outside the center of a large bore.