Who would have ever thought that such a small mill could so consistently and so reliably finish machine that hardened die steel. 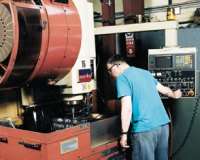 Carboloy Minimaster with a 0.250-inch precision ground insert makes a finishing cut in a die used to forge Pitman arms for an automaker.

Carboloy Minimaster with a 0.250-inch precision ground insert makes a finishing cut in a die used to forge Pitman arms for an automaker.

It's hard to say what represents a greater manufacturing challenge—a production run of thousands of pieces or a run, if you can really call it a run, of just one piece. In today's highly competitive world of producing parts for the major automakers, having to make one single part is just as important as churning out thousands. You can't make a mistake. You cannot afford to dawdle over the one part run.

Detroit Drop Die (Romulus, Michigan) has carved out its niche as a supplier of impression dies for forging, often in runs of one, to the auto companies and suppliers to the auto companies. Some of the companies that Detroit Drop Die works for include Webb Forging Co. (Carlisle, South Carolina), a manufacturer of conveyor chains; Pioneer Forge (Pioneer, Ohio), a producer of steering arms and pitman arms for the auto industry; and Keystone Forge (Northumberland, Pennsylvania), a maker of firefighters' axes.

A frequently used steel for dies is FX2 from A. Finkle & Sons Co. Classified as a hot work die steel, FX2 is a nickel-chromium-molybdenum alloy steel with high temperature properties. In addition to its use for forging dies, this steel is also used to make high performance gears, pinions and crankshafts. The very properties that make this such an excellent die material also make it difficult to machine. The dies made by Detroit Drop Die are generally hardened to nearly 38 to 42 Rockwell C.

A typical impression die made by Detroit Drop Die may contain as many as six impressions; in other words, it would be used to forge six raw parts. Standard machining practice of the already hardened die steel, according to Patrick O'Toole, Detroit Drop Die's CNC programmer, is to use a solid carbide mill for the roughing operation and then, past practice dictates the use of another solid carbide mill specially ground for finish machining. These specialty mills, laboriously ground in-house, would impart the 0.020-inch radii required for so many of the forging dies. Alone, the amount of time spent grinding the tiny radii was often prohibitive.

The company was using its Okuma-Howa 10-hp machining center, and the best that it could do with the 0.25-inch diameter solid carbide milling cutter, running with a coolant, was machining at 4.0 ipm at a spindle speed of 2,500 rpm. Depth of cut was set at 0.050 inch. To Mr. O'Toole, that was just too slow. "Besides, regrinding the cutters was very time consuming," he adds. "Also, consistently grinding the right radius was difficult at best. Then, we also had to use a coolant. To make a long story short, there had to be a better way."

Sometimes when things are the most frustrating, fortunes take a turn for the better. As it turns out Carboloy technical representative Manfred Lenz and Mark Jensen from SSC Industrial in Romulus, Michigan, paid a "cold call,"-dropped in unannounced-on Detroit Drop Die. When Mr. O'Toole related the problems he was experiencing with the solid carbide mills, Mr. Lenz and Mr. Jensen convinced him to try a Minimaster from Seco (Detroit, Michigan).

The Minimaster is a versatile milling system with replaceable inserts for grooving, facing, shoulder milling, drilling, chamfering and copying. The holder, made of either 4340 steel or Densimet, a powder metallurgy product consisting of approximately 90 percent tungsten and 10 percent iron and nickel, offers rigidity and vibration damping.

Then, running without coolant, the machining center had no trouble whatsoever taking the same 0.050-inch depth of cut at a slightly higher spindle speed of 2,900 rpm and at 8.9 inches per minute, more than double the previous cutting speed. That's a 122 percent improvement. This significant productivity improvement was not the only reason for switching to the Carboloy product. It is equally important that the tool consistently repeat this performance.

With that sort of productivity and repeatability improvement from the Minimaster now standard operating procedure, Mr. O'Toole comments, "Who would have ever thought that such a small mill could so consistently and so reliably finish machine that hardened die steel. Not only did we cut it faster, but we also saved money and cleanup by not having to use a coolant. We should have investigated the Minimaster earlier." So, what started out as a nothing ventured, nothing gained "cold call" turned into a good business decision for Carboloy and Detroit Drop Die.