Choosing a single brand of machine tools enables Ketchie Inc.’s operators to be self-sufficient. They can quickly learn to set up and program virtually any machine in the shop.
#casestudy

Courtney Silver, president of Ketchie Inc. and plant manager Terry Smith were able to present a customer with an annual savings of $30,000 last year largely due to the shop’s advanced Mazak machining technology.

In 2008, when Courtney Silver (who has background in finance and supply chain management) decided to help her husband Robert “Bobby” Ketchie manage his manufacturing business, she never thought that she’d end up running the Concord, North Carolina-based machine shop. Together, the couple operated and grew Ketchie Inc. until Mr. Ketchie passed away in March 2014. Ms. Ketchie-Silver became the president and sole shareholder, and within a year, her shop became a Certified Woman Owned and Operated Business Enterprise. Today, Ketchie continues to grow with capital investments in new equipment and technology.

When it comes to technology, Ms. Silver says the shop’s philosophy is “to acquire the very best-built machines and run the heck out of them.” For several of the shop’s machines, that means more than 30 years of use. The shop has also incorporated multitasking part processing and automation.

An important business strategy for Ketchie is that it has standardized on one brand of machine tools. The top benefit of this is that the shop can quickly get new machinists up to speed not only running machines but also setting them up and programming them.

The shop’s strategies are working. Over the past four years, Ketchie has experienced double-digit revenue growth year over year and has expanded its workforce by more than 20%. It has also invested more than $2.5 million in machine technology.

Why Ketchie Invested in Mazak Machines 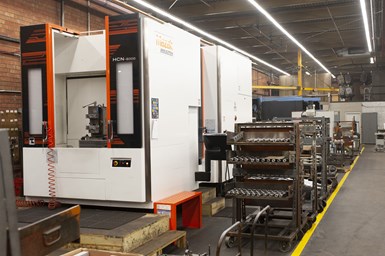 The Mazak HCN-6000s are heavy-duty machines that deliver the power and versatility that Ketchie needs for productive and precise large-part machining, as well as a special integral spindle/motor headstock that minimizes vibration and heat generation for the highest level of part quality at the shop.

Ketchie’s first CNC was a Mazak M4 turning center purchased by Bobby Ketchie’s father, Ed Jr., in the late 1970s. Since then, all the shop’s machines have been made by Mazak Corp. According to Ms. Silver, Ed. Jr. acquired only Mazak machines because of their reliability and because the Mazatrol control technology enables both EIA/ISO and conversational programming. “He realized right away that the conversational programming language would make training new employees easier and faster, and it still does for us,” she says.

Ketchie now has eight turning centers and four horizontal machining centers, including Mazak HCN-6000 and HCN-6800 HMCs, Quick Turn 350MY and 450MY turning centers with multitasking capability, and a Palletech automation system.

The Mazak HCN-6000 and HCN-6800 are heavy-duty machines that deliver the power and versatility that Ketchie needs for productive and precise large-part machining. They also feature special integral spindle/motor headstocks that minimize vibration and heat generation to improve part quality. While both machine models come standard with two pallet changers, one of Ketchie’s HCN-6000s is part of the shop’s Palletech system, which features a modular design that makes it easy for the shop to add pallets, loading stations and part wash stations as its production needs change.

The shop’s Quick Turn 350MY and 450MY feature milling capabilities and Y-axis off-centerline functionality along with standard through-hole chuck packages to process a range of part sizes in single setups. Sporting 12-position direct-drive turrets that eliminate the use of belts for improved part surface finishes and reduced maintenance, the machines can accept both VDI and bolt-on tooling and come standard with 10-horsepower (7.5-kW), 4,000-rpm live spindles. 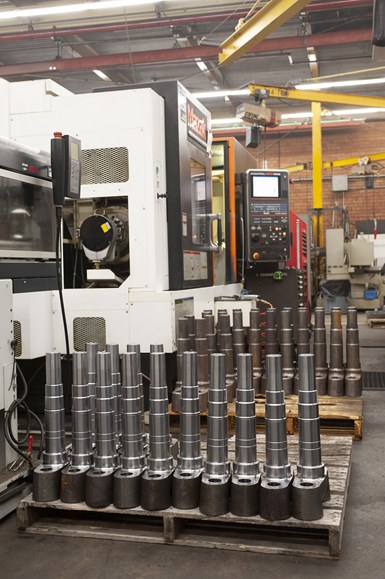 Ketchie relies on Mazak machines to quickly and efficiently process many of its components for industrial equipment and heavy machinery made from castings, forgings and raw barstock.

According to plant manager Terry Smith, the machinists do nearly all of their part programming at the machines because the Mazak controls are user friendly and Ketchie’s parts “aren’t extremely complex.” The shop will program some parts with a CAM system, but 99% of the time jobs are programmed at the machines.

Mr. Smith says that Mazak’s Mazatrol programming also significantly shortens learning curves for new machinists and enables them to easily transition from one type of Mazak machine to the next. “We want all our operators to be self-sufficient, which is why they all know how to set up and program their machines,” he explains. “And that’s the real plus about having all Mazak machines with Mazatrol controls. Operators can run our 1987 turning center, then switch to the newest Mazak multitasking machine without a hiccup.”

One Ketchie machinist that benefited from Mazatrol programming was Jordan Nicholson, a turning center operator who started with no machining experience. He quickly progressed from simply tending a machine to setting it up and programming it. He now runs the shop’s Quick Turn 450MY with live tooling and Y-axis off-centerline capability.

“Programming for both milling and turning operations on the same machine was a bit daunting at first,” Mr. Nicholson says, “but Mazatrol made the learning curve very short for me because it’s simple and straightforward. Transitioning from an older turning center to running the new one wasn’t as complicated as expected, mainly because both machines have the same type of control. Once I had the basics down, transitioning over to multitasking was practically seamless.” 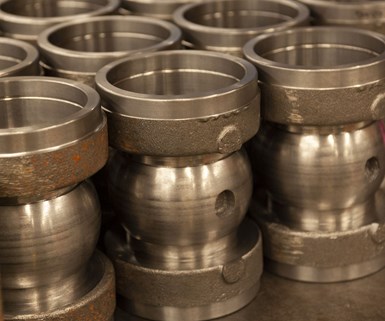 According to Mr. Smith, Ketchie bases its technology acquisitions on production flexibility and on reducing setups and machining cycle times. “The Mazak multitasking machines with live tooling have really helped reduce both,” he says. “For a lot of our jobs that used to require two or three setups, we now do them in one setup with either the QTN-350MY or the 450MY.” He also notes that when the shop can eliminate the need to handle parts, as is the case with single-process, multiple-setup machines, overall quality immediately improves and the risk of stacked tolerances drops.

While Ketchie’s multitasking machines provide single-setup part processing, the shop’s six-pallet Mazak Palletech system allows it to, “hide a lot of changeover and inspection time because the machine in the system basically runs at 100%,” Mr. Smith says. This gives the shop time to inspect parts or change them over without the machine spindle having to stop.

Most of Ketchie’s work involves components for industrial equipment and heavy machinery made from castings, forgings and raw barstock. Materials include cast iron, stainless steel and tool steels, and machining cycle times are anywhere between two minutes to 1.5 hours with required tolerances as tight as 0.0003 to 0.0005 inch, depending on the part and the machine.

“Due in large part to our advanced Mazak machining technology, last year we were able to present a customer with an annual savings of $30,000,” Ms. Silver says. “We proactively reevaluated setups and cycle times and other aspects of their particular job, and we were able to reduce both and pass that savings on to the customer. In turn, this allowed them to be more competitive. As we continue to equip our extremely talented team with the latest in manufacturing technology, we foresee many more opportunities to save our customers time and money with our Mazak technology.”