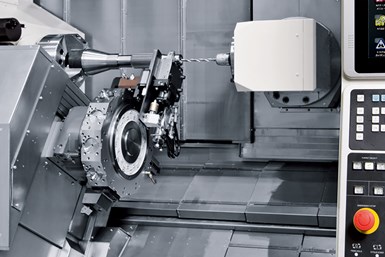 The unprecedented impact of the global pandemic is affecting the motivations of machine tool buyers as well as their plans for which types of machine tools they are likely to purchase in 2021, according to our most recent survey of machine shops’ equipment purchasing expectations. The 2021 Metalworking Capital Spending Survey, conducted by Gardner Intelligence, is the latest edition of an annual survey that has now been conducted for more than three decades. This year, the survey findings indicate that reducing cost and adding operational flexibility are two important reasons why machining facilities will be purchasing machine tools in 2021. Indeed, these are the only two motivations for purchasing machine tools that show an increase for 2021 buying compared with 2020.

The global pandemic has also unavoidably had an impact on the reliability of our survey this year, a point we must acknowledge. An annual survey is a snapshot of a moment in time. In a fast-moving year, the timing of an annual survey can color its forecast results. We saw this in 2001, for example. Our survey predictions for buying in 2002 proved to be far too optimistic, because the survey was conducted before the 9/11 terrorist attacks later that year changed outlooks, affected markets and caused purchasing plans to be delayed.

It has been a disrupted year. The GBI:Metalworking survey's measure of business activity was near its all-time low when the Metalworking Capital Spending Survey was taken. That timing, and how respondents were feeling then, likely affects the survey findings.

This year, our survey findings likely have the opposite problem, as the survey period happened to coincide with what we later discovered to be a low moment for manufacturing business conditions. A different, ongoing survey called Gardner Business Index: Metalworking found that business conditions during the month that the Capital Spending Survey was taken were not far up from the low for the year. At this point in time, conditions were significantly lower than earlier and later in 2020. Our projections of machine tool investment for 2021 are probably too pessimistic as a result. That is the giant asterisk hanging over these findings, and it is one we have faced before. Years that are particularly disrupted increase the uncertainty of our efforts to predict the year that is to come.

With that caveat in mind, here is what the 2021 Metalworking Capital Spending Survey predicts. That is, here is what we expect of the buying activity of U.S. machining facilities in terms of their machine tool investments in the coming year.

Decline Largely in “Other” Category

The pandemic is affecting the volume of machine tools that shops plan to buy. According to the survey, machining facilities are projected to spend $5.092 billion on machine tools in 2021. This is a decline of 19% from the latest estimate for 2020, and it would be the third year in a row of declining machine tool purchases.

Overall survey findings: U.S. machine tool spending for 2021 is projected to be just over $5 billion, down 19% from 2020. Much of the decline was found to be in niche or ancillary machines.

Where the decline is being seen is notable. The 2021 projection is lower than the latest estimate for 2020 in large part because of planned spending on what our survey has to call “other machine tools.” This category includes ancillary machines such as drills or niche machines such as gear cutting machine tools. Planned spending on “other machine tools” is $0.757 billion, which is down $0.884 billion from the estimate for 2020. The projected decline of more than 50% in this area accounts for nearly 75% of the total projected decline in machine tool spending.

Meanwhile, spending on certain machine categories is projected to increase. For the shops planning to invest in equipment, what drives them? The graph shows this. Out of various motivations for buying capital equipment, all decreased in importance except for two: reducing cost and increasing flexibility. 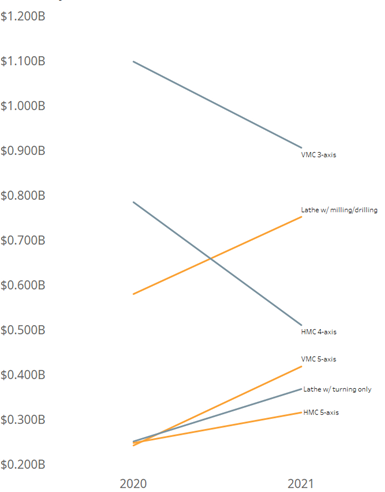 About the 2021 Metalworking Capital Spending Survey

The 2021 Metalworking Capital Spending Survey projects spending by machine type, industry, state/region and plant size. The report shows spending trends and motivations for each of these parameters, highlighting areas of strength in each one. For example, the report details top spending industries, states and plant sizes along with the top motivations for buying a given machine type. Purchase the report.

One other survey we run, Modern Machine Shop’s Top Shops Survey, benchmarks machine shop performance. More than 3,000 shops have participated in the survey since 2010. Our research shows that five-axis machining is more correlated with higher gross revenue per employee than other machining strategies. Further, higher gross revenue per employee is strongly correlated to higher profit margin. While higher revenue per employee and higher profit margin can be achieved without reducing costs or adding operational flexibility, there is a logical connection that can be drawn between these concepts that the statistical data is illuminating.

Projected spending data in the 2021 Metalworking Capital Spending Survey may also reveal that supply chains are being disrupted and shifted.

Most of the industry segments we survey are projected to decline in 2021. However, job shops are planning to increase spending on machine tools by 6% to $1.864 billion. This could indicate that original equipment manufacturers (OEMs) are sourcing more work to U.S. job shops, perhaps to reduce their own costs, or perhaps because of reshoring work to bring their supply base closer.