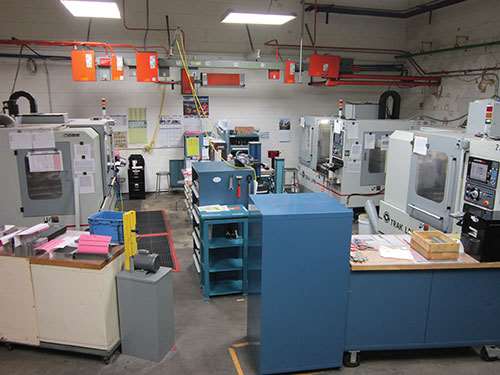 Toolchangers, conversational programming and other features make these three machines the go-to resources for small-lot production at Burr Oak Tool.

John Delarye, LPM lead man, programs a job using a conversational CNC. He attributes many of the company’s gains in short-run production to control capabilities that streamline setup and change-over.

These HMCs handle most of Burr Oak’s higher-volume work. Operators inspect parts at the machines using height and surface gages at each station.

Toolroom machinists like master mill hand Sam Handyside play the role of programmer, setup technician and inspector. However, many jobs are not quite appropriate for either the tool room or the production HMCs.

These upper and lower cutoff blades for progressive die machines exemplify the sort of short-run work that is ideal for the Trak LPMs. Although the company produces more than 1,000 of these components every year, mounting hole locations, clearances for the curved cut-outs, overall length and other attributes often vary from part to part.

This situation is largely a result of what Burr Oak has done with the space it already has. The company’s 200,000-square-foot plant in Sturgis, Michigan, is a very different place today compared to just five years ago. EDM equipment now resides in an area that once housed offices, and grinding machines are no longer clustered in a single department, to name a few changes. Spurred by pressure to reduce prices and delivery times, this company’s ongoing reorganization has delivered the improved material flows, reduced waste and faster lead times that Mr. Clark cites as major drivers of the company’s recent growth.

Yet, management recognized early on that the overall success of these efforts would depend on revamping the production process for one particularly troublesome segment of the product mix. Standard, higher-volume work would pose few problems, at least as long as the company could keep the spindles turning on its tombstone-equipped HMCs throughout its two 10-hour shifts each day. Likewise, one-offs and lower-volume work could be handled in the tool room, where machinists have the flexibility to strategize about the best way to run these jobs on three-axis bed mills. The problem lay in between, with jobs that are too high-volume for the bed mills, yet don’t justify the production mindset associated with HMC machining.

For these parts, the company invested in a third processing alternative. Available from Southwestern Industries, the Trak LPM is a three-axis VMC equipped with resources for programming, workholding, tooling and job management to form a complete production system. For Burr Oak Tool, some of these features are more valuable than others. Regardless, John Delarye, LPM lead man, says the machine’s overall concept embodies the philosophy that an effective approach to small lots requires streamlining setups and change-overs while putting control in the hands of the operators. With three of these systems in place, the company has freed valuable capacity on its HMCs without sacrificing the speed and efficiency required to meet ever-more-stringent delivery goals.

Burr Oak’s facility-wide reorganization began in 2008. The manufacturer of fin dies, fin lines, tube processing machinery and other equipment used in the production of heating and air conditioning systems had become aware that its primary competitive advantage—quality—was no longer sufficient by itself. Customers also demanded lower prices and shorter delivery times. Overseas competitors were more than happy to oblige, as were various domestic shops seeking work outside their traditional comfort zones in the wake of the economic downturn.

In response to these pressures, Burr Oak implemented a series of reforms aimed at improving communication at all levels and making the flow of material through the plant more efficient. Although these changes were facility-wide, the company’s approach to the short-run production work described above can be viewed as a microcosm of both the reasons for these changes and their overall effects on the business.

Falling Through the Cracks

Parts that don’t lend themselves to either high-production or toolroom strategies can be a problem for any manufacturer. For Burr Oak, however, an effective strategy for such work is particularly critical because of the wide variation in the company’s product mix. In a given year, 80 CNC machine tools process more than 15,000 standard part numbers, though Mr. Clark is quick to add that the term “standard” can be a misnomer. Oak-brand machines and tooling are often tailored to the needs of customers, so dimensions, tolerances and other attributes can vary from component to component. Add one-offs and truly non-standard parts, and the result is a product mix in which runs considered “high-volume” might amount to only 50 pieces by Burr Oak’s standards.

Nonetheless, there are still enough truly standard components to keep the company’s five Mazak HMCs at full capacity. Many parts produced in batch sizes too low to justify running on one of these machines are also too complex for cost-effective production on one of the tool room’s 14 Trak DPM SX5 bed mills from Southwestern Industries. Historically, such work was routed to a selection of three-axis VMCs (the machines that were replaced by the LPMs). Although these machines were capable enough, bottlenecks still arose.

The problems began in the programming department. Offline CAM programming has always worked well for the Mazak HMCs and their standardized setups, but developing separate sets of tool paths to account for part-to-part variations on the VMCs proved difficult and time-consuming. Later, any required toolpath fixes or alterations required VMC operators to stop their machines and make a phone call or even a trip across the facility to consult with programmers who were likely busy with other tasks. The case was similar when operators had to consult with departments handling downstream operations, such as finish grinding and EDM.

As work piled up, directing parts elsewhere was often the only option. This resulted in capacity problems as both the toolroom machines and HMCs became bogged down with work for which they were ill-suited. “This was absolutely killing us on deliveries,” Mr. Clark recalls.

The solution—involving a theme the company has followed across the entire facility—was to streamline communication and material flow by splitting up isolated, far-flung departments organized by machine type and arranging equipment according to point of use. For the low-batch work, this meant relocating a selection of grinders and EDMs as well as replacing the aging VMCs with the Trak LPM machines. These machines are now grouped in their own area, with the grinders and EDMs on one side and the tool room on the other. Two lead men—Mr. Delarye and Dennis Barkby—oversee production on both the LPMs and the DPM bed mills in the tool room.

This works well, the lead men report, because the approach to production on the LPMs is more similar to that of the DPMs than the HMCs. However, features that also facilitate a more production-oriented mindset put these machines in a separate category. Mr. Delarye says the following advantages make the machines ideal for taking on that critical segment of short-run work that, until recently, had fallen through the cracks:

As a result of the facility-wide changes Burr Oak has made during the past half-decade, typical delivery times for the company’s capital equipment have gone from 18 months to six, Mr. Clark says. In the future, he expects to achieve four-month deliveries. Finding an efficient approach to short-run production was critical to these improvements.

“We just had a very large order from one of our major customers, and in years past, we’d have quoted a 16- to 18-week delivery,” Mr. Clark says. “This time, we quoted it at 10 weeks, and all of the parts in that product group ran across the LPMs.” 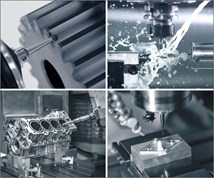