Waterjet’s significance is growing in this shop, which recently took measures to conserve the “tooling” that comes from a tap in the wall (next photo).

The water reclamation system fills what used to be an open space between the two waterjet machines.

Spent abrasive is now captured in a plastic bag. Dealing with the spent garnet didn’t used to be so easy.

On a waterjet machine tool, part of the “cutting tool” is a municipal utility—water. This component of the tooling gets piped to the shop; just open the tap and it’s there. Other forms of tooling do not feature this kind of availability, and the difference affects the way shops think about this tooling resource. Typically, waterjet users do not consider water’s “tool life” the way one might consider the life of an insert or milling tool. That’s unfortunate, because the useful life of water in a waterjet machine tool is long indeed.

KLH Industries knew this. The Germantown, Wisconsin job shop recognized that it was not getting nearly the value it could out of the water that its own two waterjet machines use to deliver metalcutting garnet abrasive. When these machines were cutting parts, each machine sent about 6 gallons of water per minute down the drain—but not anymore. 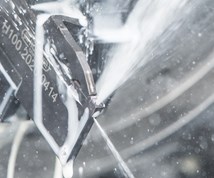 The shop recently added a system for reclaiming waterjet water. The system was built and installed by metalworking filtration specialist Ebbco Inc. (New Baltimore, Michigan). Now, little water goes down the drain while the machines run. According to waterjet department manager Tim Henning, water use in his department is down at least 95 percent.

Still, yet another source of savings may be even more significant, he says. As it turns out, city water is rather abrasive even before the garnet is  added. With this new water system, the incoming 600-part-per-million city water gets filtered down to 50 ppm or less. By making the water so much less demanding on the components of the waterjet machines, the system actually conserves not only water, but also the machine hardware itself.

For KLH, the importance of waterjet continues to grow. This shop was founded on EDM work, growing over the years to acquire various milling and turning machines as well. The waterjet department complements these other capabilities in multiple ways. Not only does it let the shop serve customers more comprehensively, but it also enables the shop make far better use of many of its other metalcutting machines.

Both advantages are particularly beneficial for aerospace work. The importance of this industry has grown as well for the KLH (which this year pursued and won AS 9100 certification). One reason waterjet figures into this work in particular is because aerospace customers often demand subassemblies or kits of parts to be made and shipped together. With waterjet, KLH can quickly cut the non-metal parts that go with metal parts being produced in other areas, most notably rubber seals and gaskets for valve components that are being made on other machines.

At the same time, waterjet helps just as much with materials at the other extreme of difficulty. Titanium, Inconel, Waspalloy and other challenging aerospace metals can be milled more efficiently on machining centers if precision blanks are first cut to size with waterjet. Getting the blanks close to final dimensions through waterjet machining saves both cycle time and tool life at the chip-making machine tools.

KLH first saw the water reclamation system at a trade show, Mr. Henning says. It wasn’t being marketed in the booth where they saw it, at least not directly. Instead, it was being used to solve a problem natural to waterjet machining at a trade show. Since the exhibition floor offered no practical way to send water down a drain, the water had to be contained. Mr. Henning realized his own shop could benefit from the same sort of containment.

Now, with the system in place, the only water loss comes from splashing or evaporation. The shop has measured this loss to be about 90 gallons per 24-hour period for the two machines together. Given that the loss was hundreds or thousands of gallons per day before, the shop’s water bills are now much lower. In addition, the shop is discovering the extent to which the system also prevents time from being lost, actually increasing the uptime of the machines.

Some of the uptime came from a seemingly basic improvement: the way the system captures spent abrasive. Garnet is now sent to a plastic bag for emptying. Managing spent abrasive in the past was not nearly so easy, Mr. Henning says—each machine would  be drained, excavated and shoveled every 3 or 4 months. That work would take the machine out of production for most or all of 2 days at a time, and it also took the employees away from work they’d rather do to perform one of the more dreaded chores in the shop. Now, the expense and lost time have been eliminated, and so has the drain on morale.

Yet the system now also filters particles far finer than garnet—particles so fine they might be considered harmless, if not for the harm they inflicted on the components of the machines. The shop’s local water supply is unusually hard, Mr. Henning says, and the difference had been noticeable in the machines’ maintenance needs. Cutting heads failed more frequently than the manufacturer’s literature anticipated, and intensifier pumps would last only 1/3 to 1/2 as long as expected.

For the pumps, the shop keeps spares ready. Failures, therefore, take the machine offline only for the 30 minutes necessary to do the swap. But with each replacement, that downtime is followed by 8 hours of offline work for rebuilding the old pump to get ready for the next needed re-placement. It is too soon to say for sure how much money the new system will save the shop by reducing this kind of machine service. But given both the labor and hardware content of this work—for pumps and other components—the streamlining of the waterjet machines’ service requirements might actually prove to be the most significant source of savings KLH will realize from the new water containment system.