This article is the third time Advanced Precision Engineering (APE) has appeared in Modern Machine Shop, but rest assured we do not play favorites. The identity of the company was unknown until after its selection as one of this year’s﻿ Top Shops Honors Program winners. That said, it was not surprising to discover that APE had not only separated itself from other shops, but also distinguished itself in the breadth and sophistication of its machining technology.

After all, the data reflected what an MMS visit only a few months prior had already revealed about the pace and extent of recent change. Additive manufacturing was the focus of the resulting article, but we just as easily could have covered new collaborative robots, new pallet-fed HMCs, or new automated turn-mill equipment. Had the visit been postponed by only a few weeks, the article might have been about a new 40-pallet automation system for five-axis machining. Altogether, the 2020 Machining Technology honoree is a superb showcase of what is available to any modern manufacturer interested in machining a wider variety of parts unattended for longer periods of time.

APE’s work is mostly for large defense contractors as well as automation, semiconductor and medical industry firms. More than 40% of parts cross one of eight HMCs, all of which are fitted with eight- or 10-pallet automation systems. Feeding machines with a stream of pallets set up offline is a proven strategy for keeping machines running without interruption. Tombstone fixtures press the advantage by presenting both the fronts and sides of multiple workpieces to the spindle, then rotating to expose fresh material.

However effective the process, the engineering behind the machines that cut the metal also makes a difference. “We knew we had to look at a higher-level machine,” said CEO Alan Soucy in 1997, when MMS published its first article about APE. The model he chose then remains the shop’s standard today: Kitamura’s MyCenter. 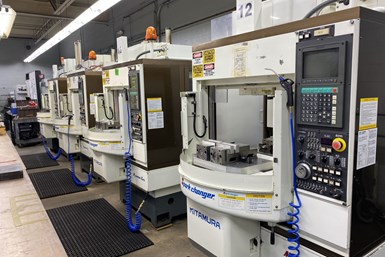 APE standardized long ago on the same make and model of HMC. Although the shop installed new ones as recently as 2019, these particular machines have run reliably for years.

Mr. Soucy still prizes the machines’ hand-scraped box ways, as well as their durability and reliability. In fact, one machine replaced only a few weeks before the second MMS visit last year had run for nearly two decades. “We never replaced the spindle, the ballscrew, or anything else,” he says. “It was still as accurate as the day we bought it.”

However, five-axis machining, including full contouring, is required for the shop’s most demanding work, such as missile firing control systems. Within the past two years, the shop has added four Mikron Mill X 600 five-axis machining centers from GF Machining Solutions. All four are part of the same cell, where a System 3R carousel-type transfer robot shuffles pallets among the surrounding workzones and setup stations.

Among other changes since MMS last visited APE, the five-axis machines here are now included with three other identical models in a cell based around a 40-pallet automation system.

As for the machines themselves, Mr. Soucy appreciates polymer castings that minimize vibration. Also critical is the use of linear motors to drive the axes. “Acceleration matters,” he says. “Straightaways are easy, and we can slow back up again in the corners without losing any time. A lot of our five-axis work is 3D surfacing, and that’s all about how fast you can stop and start.”

Any part not slated for horizontal or five-axis machines is likely to be a good candidate for handling on one of four collaborative robots, all UR-10s from Universal Robots, that can be wheeled around the facility as needed. Common pairings include three-axis VMCs, turning equipment and three Mazak Integrex turn-mill machines.

This is possible in part because of how easy the systems are to program. The company has installed anchors in front of each machine to ensure repeatable positioning. Robot position from machine to machine, as well as pickup and dropoff locations, varies according to the ergonomics of each workstation and the space available for both the operator and the mechanized arm. Once the robot is in position and wired to the machine, it can be guided by hand. “You grab the wrist, bring it over to the part in the chuck and position it, and call that X zero, Y zero,” Mr. Soucy says.

When the job changes, employees simply change the grippers (more on that later) and apply the new program, which is likely to use the same or similar route between machine workzone and part pickup/dropoff locations. While the larger motion is taught, camera systems and force sensors guide the robots in orienting the grippers to pick up or deposit parts on tables, thus eliminating the need for grid systems or other fixtures. “We just place parts on the bench, and the robot self-aligns to pick them up and place in the machine,” he says.

Quality control is a more recent cobot application. APE recently added a third CMM (a Global S from Hexagon Manufacturing Intelligence) and paired it with a fifth UR-10 and a shelving unit of the shop’s own design. All parts are mounted on standard fixtures that use drawbars to interface with a pneumatic chuck on the CMM table. Once the shelving unit is loaded, the robot and CMM can proceed through an entire lot of parts entirely unattended, automatically logging the data into the shop’s computer system.

Thanks to this system, jobs with 100% inspection criteria are less likely to create a bottleneck ahead of inspection. This became a particular problem after the addition of the five-axis machining cell. “Right now, we have it checking out defense parts 24/7,” Mr. Soucy says. 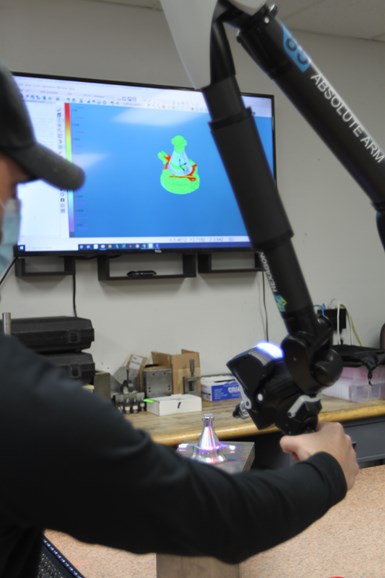 An Absolute Arm from Hexagon uses cameras to take a point cloud that can be compared to the original CAD model.

Five-axis parts are often checked on a Romer scanning arm from Hexagon Metrology. The portable CMM provides particular opportunity in what Mr. Soucy calls “reduced-dimension drawings:” part designs that treat all non-critical surfaces as profile tolerances because they require enough 3D surfacing to make other techniques difficult or impossible. “You just scan the whole part, and it matches up to the model, and whatever’s out (of tolerance) is shown in red,” he explains. “First pieces are super-quick because the only features we check normally, on the regular CMM, are critical.”

Another notable quality control practice is the use of on-machine probing on the palletized HMCs to check not just parts, but people. That is, an on-machine probe can provide a safeguard against human error by, say, checking whether a clamp is in the right position.

One of the most common applications for collaborative robots at APE is tending the most recently installed Mazak Integrex. This machine is largely identical to the shop’s other three turn-mills, with one particularly notable exception: It came with a built-in robot. With an internal robot, the option for a cobot or a bar feeder on the front end, and a dedicated parts accumulator on the back end, the machine is a veritable mousetrap of automation. “It’ll run all weekend unattended,” Mr. Soucy says.

“You just change a couple of settings, then every 30 hours or so someone comes to take the parts out.” – Alan Soucy

Attaining this level of automation for parts large enough to justify the cobot rather than the barfeeder began with the same strategy driving the CMM application (and, for that matter, the pallet-fed five-axis machines):  standardization of workholding and workpieces. In this case, two chuck jaws are machined to close snugly around dovetails machined into the blanks, which are otherwise rectangular for easy transfer from a simple, two-pronged robot gripper.

On-machine probes keep tool offsets updated and monitor for breakage and wear during operations on both the main and subspindle. With machining complete, a robotic arm built into the machine enclosure uses custom grippers to transfer parts to a conveyor. Parts exit the machine into a Rota-Rack, a conveyance system from Royal Products that uses a spiral construction to direct parts into the center of a turntable.

Although this particular turn-mill setup generally is dedicated to the shop’s largest lots of small parts, particularly medical work, changeovers are relatively simple. “You just change a couple of robot settings for the part size, and maybe the way it picks up and orients it into the dovetail, and that’s it,” Mr. Soucy says. “Then, every 30 hours or so, someone comes to take the parts out of the Rota-Rack and put them on a cart.”

One potential process delay with the automation on the newest turn-mill is that standardization is impossible once parts are machined. The robot inside the machine tool depends on custom grippers. The case is the same for virtually every other cobot machine-tending application in the shop. Devoting machining capacity to custom robot grippers, whether for the UR-10s or the robot on the turn-mill, would be impractical. Making these systems work required another investment: the shop’s first 3D printer, a Markforged X7. Located in an office area above the floor, the 3D printer can print grippers designed from part CAD files overnight. 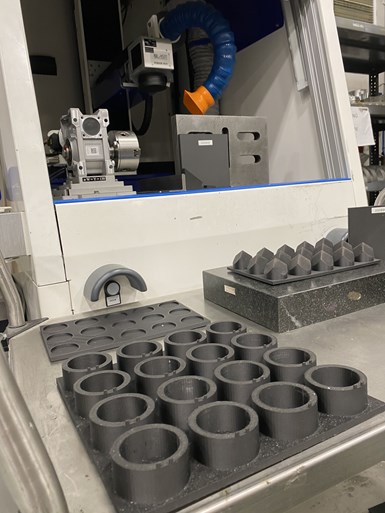 One application for APE’s 3D printer is fixtures for a new four-axis part-marking machine that helps free capacity on equipment that is better dedicated to cutting metal.

Applications for additive have expanded beyond robot grippers. Examples include assembly aids, such as covers that limit the risk of part damage, and custom CMM fixturing. 3D-printed “kits” hold gages for specific jobs. Capability to pass around realistic models of every new part helps lights-out processes. Printed “shrouds” protect laser tool sensors and probes from coolant. The system also prints fixtures for a new four-axis part-marking machine that helps free capacity on equipment that is better dedicated to cutting metal.

How 3D printing’s value-add keeps adding up for APE was the subject of our second APE article, which was published this past March. Those interested in more details on APE’s use of additive, and the shop generally, can turn there.