Almost everyone had recommended twin-pallet horizontal machining centers, but Steve McClure decided to go another way. Against the advice of suppliers and peers alike, the shop he had recently acquired, Pacon Mfg, Inc, installed two five-axis machining centers, each fed by a 10-pallet automation system.

The recent addition of a two more automated machining centers confirmed the company’s continued commitment to five-axis. However, Mr. McClure’s answer to a 2020 Top Shops survey question about the most significant changes in the business did not mention five-axis machining, nor anything technology-specific. Rather, he wrote, “standardization of fixtures and tooling to allow automation of high-mix work.” At Pacon, five-axis works only in the context of a process rooted in lean manufacturing fundamentals.

Each of the first two five-axis machines installed at Pacon is serviced by its own pallet pool. All photos: Pacon Mfg, Inc.

The four five-axis machines now process more than 70 percent of company’s work. The first two, installed in 2015, are DMU50 five-axis verticals from DMG MORI, each with 10 pallets and that builder’s PH-150 pallet-transfer robot. The second two machines, Makino A500Z five-axis horizontals installed in 2018, are designed for larger parts and are both serviced by a 60-pallet rail-transfer system.

However, initial advice to standardize on palletized HMCs instead made sense on the surface, Mr. McClure says. Many manufacturers have proven the worth of this arrangement for reducing setups, and few of Pacon’s parts benefit from full five-axis contouring anyway.

Nonetheless, Mr. McClure’s position was firm: Only five-axis machining would do for the kind of shop he wanted Pacon to become, because five-axis machining is inherently leaner than four. He attributes this insistence to his roots in the semiconductor industry, where lean manufacturing is inherent to any process. “The whole point there is to make millions of parts with predictable outcomes,” he says. 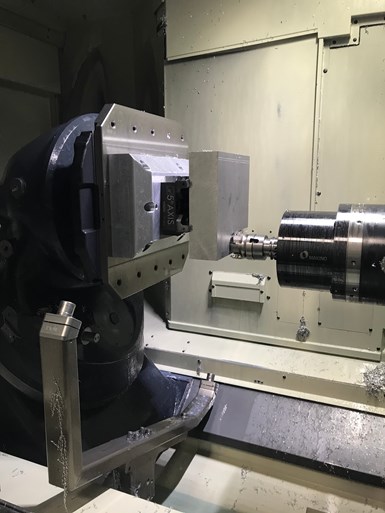 A standard blank in a standard vise undergoes machining on one of Pacon’s Makino A500z five-axis machines.

The additional axis makes a big difference in addressing the kinds of waste targeted by lean manufacturing. Without it, performing roughing and finishing on every side of a part often requires re-clamping to a new location or position, or even moving to a new machine. Reclamping might also be required when one workpiece on the tombstone impedes spindle access to another. In either case, the result is waiting (batching) as schedule-clogging work-in-process accumulates at the bottlenecked workstation. As for defects, re-clamping breeds opportunity for error, whether in the form of an overtightened clamp, interference from a stray chip, or tolerance stack-ups throwing off true position call﻿outs for features on different part faces. Less deburring also means less opportunity for error, and setups are simpler as well.

The five-axis Makinos accommodate both single-part setups and the pallet-mounted tombstones that typify many horizontal machine setups.

The challenge was that Pacon Mfg. does not make millions of anything. Customers hail from not only the semiconductor industry, but also space, defense, life science, microfluidics and more. Parts have much in common — generally no larger than a shoebox, “boxy” constructions with many complex features — but every job is different nonetheless. Order quantities range from 50 to a few hundred.

Work such as this chassis requires fine detail and smooth surfaces.

The lean process Mr. McClure envisioned would require not just standardizing on five-axis machine tools, but also common fixtures and tooling to ensure fast, repeatable setups. As for the tooling, cutters in the cells’ automatic toolchangers (ATCs) are generally those that have been deemed the most versatile and the most common, and many slots contain duplicate tools to keep processes running longer when they wear.

Standardizing on fixtures required standardizing on workpieces. All blanks are specified to common dimensional envelopes for gripping, generally on self-centering vises from 5th Axis Inc. For single-part setups, the only other options are a standard Kurt vise or a collet, which holds round stock for machining the smallest parts in succession from the same blank (operators simply loosen the collet and pull up the stock after cut off).

This satellite bracket also required basic assembly. In another recent example of such work, the shop made more than 50 parts for the Mars 2020 Perserverence rover.

The horizontal configuration of the Makino machines enables multi-part tombstone setups as well, but fixtures are standard for much of this work, too. “We do have some custom fixturing for our higher run parts—five hundred to a thousand per year—and we use soft jaws frequently for last operations,” he says.

Still, a large class of parts measuring less than 0.5-inch thick are cut from .5-inch by 4.5-inch bar cut into 15-inch lengths, one on each corner of the tombstone. Using tooling changeovers puts the process as close as possible to the lean ideal of single-piece flow.  “However many of these parts we can fit on a blank is what we run — it’s  super efficient,” he says. “We can run 1 or 2 pallets and finish an order. The machine, because of the tool capacity and pallet system, can move on to the next job, which may be in no way similar.”

Pacon’s efforts to standardize tooling have implications for the whole manufacturing process, beginning with programming. For parts routed to the Makino cell, tte tool library in the shop’s Mastercam CAM software is populated not with generic data, but the dimensions and the offsets that define each individual cutting tool assembly in the ATC. With 125 of 313 ATC slots occupied with the same tools for every job, changeovers no longer require assembling new toolsets and calculating new offsets.

On all five-axis machines, tool assembly and measurement is considered too essential to leave to people. These tasks can be executed more repeatably and reliably by the CNC presetter, a Speroni Magis 400 from Big Kaiser.

This presetter has been in place since shortly after the 2015 installation of the first five-axis machine. By automating tool measurement and offset calculation, the presetter eliminates the potential for human error, differences in toolholder clamping force, and other variation that could manifest in inconsistent machining on the cell. Automatic data transmission to the machines’ CNCs eliminates the need to enter offsets and as well as any risk of data-entry error. “As long as the tool is loaded right and in the right position, everything will be good,” Mr. McClure says.

With the second cell, tools are managed in the same way as the first with one notable exception: Presetter data transmits not only to the cell controller, but also to a radio-frequency identification (RFID) tag on each holder. Upon loading into the ATC, an automatic scan of the tag ensures the values of the tool in the given ATC slot match the values in the cell controller tool library.

This capability will be expanded and become more useful as the shop works to standardize further on cutting tools, Mr. McClure says. Rather than building and presetting new assemblies for a job, RFID tags will carry the necessary offsets and other data with the tool, regardless of the machine. The impact is expected to be particularly significant for the shop’s three-axis machine tools, which, unlike the Makinos and their 300-plus-slot ATCs, require changing tools for each job even if all tools are preset and pre-assembled. 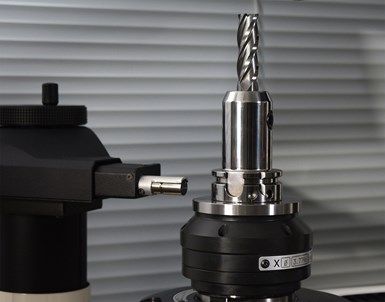 RFID tags on each toolholder store offset and dimensional data.

Meanwhile, RFID tools also serve another purpose: predicting whether tools will last through unattended machining cycles. “Whenever a tool gets used, the cutting time is recorded on the tool itself and in the cell controller,” Mr. McClure explains. “If cutting time surpasses a certain threshold, it’ll red-flag and say ‘hey, the tool needed to run this program doesn’t have enough life left to complete it.’”

Perhaps the most obvious examples of the lean contribution made by Shoptech Software’s E2 ERP system are the barcoded job travelers that now populate the shop floor. Scanning these codes helps address waiting, excess motion and other forms of waste by providing at-the-source, near-real-time collection of data that is virtually assured to be accurate. “Invoicing used to be a manual process,” Mr. McClure explains. “Now, once we ship a part, it generates the packing list and the invoice and emails it out automatically.”

ERP also made it easier to achieve AS9100C certification, which has been essential to the shop’s growth, Mr. McClure says. “We wanted to automate as much of the paperwork and overhead as possible,” he explains. With quality foundations in place, “we started looking at our pain points. What causes yield loss? What causes schedule delays?”

The extent to which a process is lean depends mostly on the thinking of those who plan it.

Enter the five-axis cells, which help minimize both. Each also shipped with its respective builders’ machine monitoring system. Machine monitoring has helped justify decisions made in the name of lean manufacturing, beginning with the advantages of five axes over four. “If your yield loss is 1%, and you need 100 parts in the first op, then you’d better make 101 parts,” Mr. McClure explains. “But if you have four setups, then you have to make 104, and you’ll overproduce. With one setup on one five-axis machine, you make 101 parts and save 3% on your scrap rate. It’s the law of small numbers — every time you re-clamp, you are subject to a loss. For us, five-axis solved overproduction based on yield loss for each setup. It solved the batching.”

The shop has room to potentially add two more machines to the 60-pallet rail system servicing the Makino A500Zs.

Some benefits of the five-axis automation require no justification, such as eliminating rows of benches that were once dedicated to manual deburring. Other cost-benefit analyses have been blurrier, even with capability to pull data from the shop floor. For example, standardizing on blanks can create additional waste in the form of less efficient material use for certain parts. In fact, material costs rose as soon as the shop started this new practice. However, “operating margins went up as well,” Mr. McClure says. “We had less schedule pressure.”

Standardized tooling and workholding may have opened the way to high-mix automation, but standardizing is easier said than done. Whatever the level of sophistication of technology on the shop floor, the extent to which a process is lean depends mostly on the thinking of those who plan it.

As for the thinking driving Pacon’s process, “If it’s work that we don’t add value to, like cutting blanks from standard plate, have someone else do it,” Mr. McClure says. “If it’s work that can be done by the machines, let’s have the machines do the work. This was the first thing we did, bringing this change in mindset. It’s not a knock on traditional machine shop management styles, it’s just different.”