Where Is Manufacturing Technology Going for Auto?

A primary answer to that is a place where there are a lot of experts in AI and machine learning. Digits are driving physics.

When you talk with Tim Shinbara, vice president and chief technology officer at AMT—The Association For Manufacturing Technology, you might think that the discussion is going to be focused on physical things like, well, machines. And were you to think that, you’d be wrong.

Because when he talks about the on-going advances in manufacturing technology they are largely predicated on digital tools. Machine learning algorithms, artificial intelligence and the like. 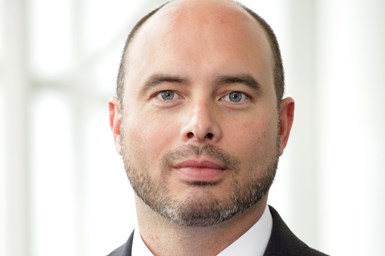 And when the subject turns to more tangible things like machining center spindles, the point he makes is that advanced integral motor-type spindles are not only providing quick response times to G-codes, but are providing “a whole suite of different information streams to the controller.” Information about the environment. Vibrations. Stiffness data. Information streams that can be translated into what could be considered actionable intelligence.

Shinbara says that machine tool vendors and academic researchers alike are working on systems that will help “tune” machines so that operations can be performed to meet requirements. There will be, he says, much greater consistency from part to part to part.

While there is a significant amount of existing sensors and instrumentation  available on machines at present, Shinbara says this will be amplified in scope such that a comprehensive suite of inputs will be  analyzed and evaluated so that improvements and adjustments in machining are possible.

“It is important to normalize the data so that it can be used for analytics,” he says. Given the number of inputs, this can be heavy lifting, data-wise.

Some of this work is being done in the cloud. But he says that several companies are performing the work off the machine but closer to the operation, such as at the work cell or factory floor level.

Although there are plenty of companies working on this tech—machine builders, control vendors and third-party software providers—and although Shinbara says that there is really a noticeable acceleration in the work that is being accomplished, it is still not off-the-shelf available. Yet.

Be that as it may, Shinbara says, “The concept of ‘one-and-done’ is becoming more of a reality.”

One of the technology areas where Shinbara sees plenty of advances is in robots—again largely driven by information. He says that the deployment of improved vision systems and laser trackers are providing robots with “a better picture of reality in the workcell.”

Robots driven by information are given “a better picture of reality.”

A factor that is important in this space is the discernment of “a good data point from a bad one.” So while training machines to be able to make those decisions is still a laborious task, Shinbara says that the learning curve is being shortened thanks to work that’s even being done in other fields away from the factory floors, such as autonomous driving. (In that case the systems must learn what’s a real vehicle or pedestrian and what’s not, something not always accomplished, and which can have fatal consequences.)

Shinbara says that robot controls employing AI and accurate-yet-economical vision systems can be used to create robot systems that have the ability—both from the standpoints of timing and accuracy—to make “intelligent movements,” which can result in, say, fast, precise assembly operations.

Robots, he says, are “moving from the mechanical engineering to the computer science world.”

Another important development is that robots are becoming more plug-and-play. That is, you may have a robot from Company A but use it with a robot control from Company B.“A robot is looking more like a printer to a general network than it did in the past. This is being driven, he says, by standards harmonization, which is primarily occurring in the Industrial Internet of Things (IIoT) world with standards developers like MTConnect, ROS-Industrial, and OPC UA.

Shinbara suggests that smarter, more economical robots could help industry augment the talent shortage problem by leveraging the capabilities of the fewer people that are available for the manufacturing operations; ultimately, he sees far more new job creation from robotics than not.

Shinbara segues from robots to advances in additive—and notes that one of the things that is happening in additive manufacturing is the use of robot-like structures to build products, given the ability of a robot arm to be manipulated through space. In other words, the robot isn’t something that just paints and welds, but can actually become a parts-building device. 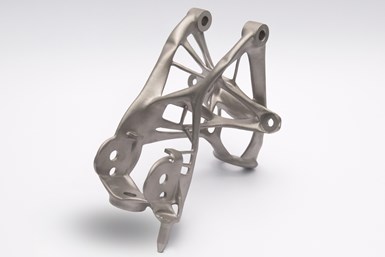 This is a seat bracket design that GM developed with software provider Autodesk.

Overall, he says that there are plenty of advances being made in materials, both in types and particle sizes. He says that this is leading to more attention in how materials are being handled—before, during and after builds.

Two other things he points out about the additive space: “Technology is outpacing adoption,” which may be a result, in part, of the second thing, which is the variety of companies that have entered the capital equipment space, such as HP and Xerox.

And just as you’d only imagine hearing the names of companies like HP and Xerox as they might be used in office settings of manufacturing equipment vendors, a talk with Tim Shinbara can lead to unexpected places.