By thinking in terms of traditional workholding and standard vises, CNC machine shops could potentially miss the freedom of movement that would enable them the access to mill the full edge of this workpiece. All photos courtesy of Big Kaiser.

“Major decisions about workpieces, machine tool selection and CAM software are all very influential to the overall productivity of five-axis machining,” said Jack Burley, VP of sales and engineering for Big Kaiser, during a virtual event the company recently hosted from its Hoffman Estates, Illinois, facility. “But strategies for using the right fixturing and tooling can make or break higher speeds and feeds. Switching from vertical to five-axis truly requires new ideas if you want to maximize efficiency and cycle time.”

So, what are those new ideas? According to John Zaya, Big Kaiser’s product manager for workholding, they encompass both mindset and technology. You cannot apply three-axis theory to five-axis machining. By thinking in terms of traditional workholding and standard vises, CNC machine shops could potentially miss the freedom-of-movement opportunities and workpiece access that five-axis machining can afford.

In three-axis machining, the fixture is designed to hold the part in one position. If the workpiece needs to be repositioned for a secondary operation, it must be held another way or in a different fixture so the machine can access more surfaces, especially the bottom edge. On the other hand, a five-axis machine has more flexibility in its movement to reach all surfaces, but it can only do so if the fixturing or workholding allows access. 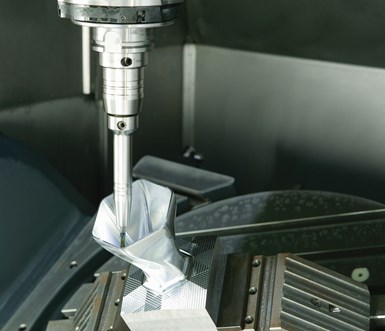 In five-axis machining applications, special attention must be paid to clearance and eliminating the interference between the workpiece fixturing and the machine table, spindle housing and cutting tools.

When transitioning from three- to five-axis machining, Mr. Zaya says special attention must be paid to clearance and eliminating interference between the workpiece fixturing and the machine table, spindle housing and cutting tools. This is especially evident when machining a small part on a large table. With a three-axis machine, both large and small workpieces alike can be machined on a large table with relative ease because the axis access remains the same regardless of part size. However, with a five-axis machine, clearance and interference problems occur because small parts tend to be concentrated toward the center of the machining table. The edge of the table can become an impediment as the table pivots.

Two common methods for overcoming interference include using a long tool that reaches from the spindle down to the workpiece, and elevating the workpiece off the table to bring the part closer to the spindle. According to Mr. Zaya, the problem with the first method is that tool performance can suffer as the length-to-diameter ratio increases. Long tool assemblies lead to lower feed rates, speeds, and depths of cut, resulting in more passes and increased program size. More chatter is also a concern, which requires more handwork to finish surfaces, ultimately leading to an increase in production time, he says.

The other way to address clearance and interference issues is by exploring different workholding solutions. Mr. Zaya says that some traditional methods of elevating a workpiece off the table include using vises with tall jaws, but these pose their own problem as the clamping spindle may be very far from the jaw, which reduces the effectiveness of the clamping system. Moreover, if the jaws are too tall, they are prone to tilting, Mr. Zaya says. This means the clamping force causes the bottom of the jaw to move into the space unoccupied by the part while the top of the jaw remains in its original clamping position around the small part, forming a “V” shape, and ultimately causing the part to squeeze out of the top of the jaws.

For true one-and-done operation in which the machine can complete the entire workpiece in one setup, Mr. Zaya recommends Big Kaiser’s Unilock five-axis workholding system. The system features two primary components: the clamping knob (retention knob) and the clamping chuck. The knob is attached to the underside of the fixture and the chuck is installed on a base on the machine’s table. “The knob becomes the location as well as the retention,” Mr. Zaya says. “It is what puts the workholding system in the right place and holds it in place.” The workholding system that attaches onto that knob is designed to be robust but also small, so it fits into the footprint of the workpiece, ensuring access to all edges of the workpiece. 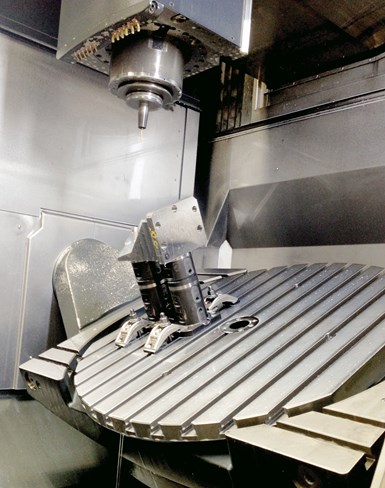 This double-base stacking system enables users to change the height of the workpiece in relation to the table at will.

A subset of that system is the five-axis modular stacking system. According to Mr. Zaya, this system gives users the ability to change the height of the workpiece in relation to the table at will, meaning it’s not a fixed value like traditional workholding, which cannot change if a part needs more elevation. The modular stacking system is composed of various heights and styles of bases as well as reductions. These can be stacked and reconfigured per application requirements. Big Kaiser has two different base heights and three heights of extensions. Both the bases and extensions feature an 80-mm body diameter, and the reductions reduce the body diameter down to 50 mm while providing various height options. Mr. Zaya says the primary benefits of the stacking system are its ability to elevate the part off the table of the machine, providing more clearance for the spindle housing. Elevating the workpiece enables users to shorten long tools down to more appropriate lengths. 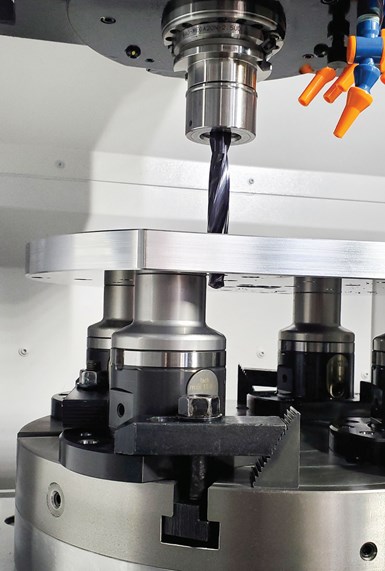 In this example, Big Kaiser was able to drill a hole right next to the 50-mm-diameter body of the reduction. Without the reduction, the drill would have gone into the top face of the base chuck.

“If we think of that 80 mm being a minimal diameter, you can put that chuck 40 mm to the edge of the workpiece. If you go any less than 40 mm, now part of that chuck is going to be exposed beyond the edge of the parts. If you use a reduction, that gives you the height clearance you might need. It also gives you radial clearance because now, by going from 80 to 50 mm, you can put the knob or the reduction at minimum 25 mm from center line or from the edge, giving you the clearance in addition to the height you might need.”

Aside from paying special attention to clearance and interference, Mr. Zaya has three tips for five-axis workholding:

The five-axis machine should be sized in such a way that it accommodates specific workpieces, not a vast range of workpiece sizes. This is counterintuitive to the three-axis mindset in which shops will commonly buy the largest machine possible (within budget and floor space) to accommodate its largest part.

According to Mr. Zaya, a shop researching five-axis machines should work with the machine tool builder to discuss the exact part sizes that they are interested in machining. It is up to the OEM to help the shop find a machine that will be best suited for the majority of their workpieces, or more specifically, those in which five-axis machining is critical. In an ideal world, Mr. Zaya says this is the point in which the machine tool builder should also be discussing tooling and workholding options. “It is much easier to come up with the correct workholding strategy if a shop starts planning before the machine tool purchase,” he says.

But things don’t always work out as best-case scenarios. For instance, the shop might not always have the luxury of planning ahead. Perhaps management plans new machine tool purchases separately from its accessories, Mr. Zaya says, or maybe a shop has been running its five-axis machine for years and a new job has prompted it to reevaluate its tooling and workholding solutions. In any case, the shop must look at its workpieces to determine what, exactly, the tooling must be able to access and which workpieces can be completely machined in one holding. Mr. Zaya recommends looking at the part in both the raw and the finished state.

“Dovetails are great, but they are not the only workholding solution for five-axis machining,” Mr. Zaya says. “They are best suited for parts measuring 6 by 6 inches or smaller.” The dovetail has enough holding power that it can hold parts well within their footprint, giving complete access around all five sides of the workpiece. The challenge with this type of fixturing, he says, is that it doesn’t work as well on curved surfaces, and it can’t be used on parts with varying widths. This can lead to overhang that is detrimental to the overall stability of the part. “They have their place, but they have effectiveness limitations as well,” Mr. Zaya says.

Tip #3: Get Out of Your Comfort Zone

Take a step back and reconsider your options.

Finally, Mr. Zaya has this advice for CNC shops transitioning from three- to five-axis work: Don’t think that your fixture has to be designed around the part. Holding could take a very different form. “Take a step back from what you’ve always done and reconsider your options. Now you have a lot more flexibility with the machine, so now you need to consider more flexibility with the fixture.”