Hitting the Zone with Five-Axis Machining

By investing in five-axis machining technology, Advance CNC Machining has done more than just add new capabilities to its roster. It has found a way to achieve something that most of us strive for: a way to work “in the zone.”
#highspeedmachining

Advance CNC Machining of Grove City, Ohio, has consistently increased its technical sophistication for manufacturing complex parts through investments in new technologies. Here’s an example of five-axis machining for a medical robotics component that required additional investments in fixturing and inspection equipment.

Former NBA star Michael Jordan has talked about moments on the court when scoring was so effortless that it felt like he was shooting into a giant bucket. We typically refer to this phenomenon — when we are fully absorbed and fulfilled by a task that utilizes our skill — as being “in the zone” or in a state of flow. In his book The Art of Leadership, author and psychologist Dr. George Manning theorizes that people are happiest during the moments when they are “in flow.” To achieve this state, Dr. Manning says a balance must be struck between the challenge of a task and the skill of the performer. Both must be sufficiently high and evenly matched.

All of us experience these moments. But can a job shop achieve a state of flow?

Of course it can.

This is possible by succeeding at increasingly challenging tasks at which its employees are highly skilled. For a prime example of this, look no further than Advance CNC Machining of Grove City, Ohio. Here is a closeup of a medical robotics component manufactured by Advance CNC Machining. The company has so far only tackled three parts that require true five-axis contour machining — all for this customer.

For at least the past 10 years, Advance CNC has challenged itself to perform more and more complex machining operations while elevating its employees’ skills needed to complete them. Back in 2014, we wrote about the company’s investment HMCs after years of working strictly with verticals. Since that time, Advance CNC has steadily increased its technical sophistication for manufacturing complex parts. Today, much of that sophistication centers around five-axis machining.

Advance CNC purchased its first HMC less than 10 years ago. With it, company President Jeremy Hamilton as well as his colleague and VP of Manufacturing Kyle Dunaway quickly realized an increase in throughput and decrease in errors that resulted from staging multiple setups on the vertical machines. “Going from spending $70,000 on a machine to spending $250,000 or $300,000 was a pill to swallow,” Mr. Hamilton says, “but it paid off.” It was, in other words, time to let the medicine take effect.

Investing in five-axis machining had other, unexpected results for Advance CNC. As the complexity of parts that the company produced increased, it began to more thoroughly scrutinize its requests for quotes (RFQs). Mr. Hamilton and others also realized that five-axis machining required investments in ancillary technologies, such as CMMs and workholding fixtures, that became necessary for producing highly complex parts. This medical robotic component loaded on a DMG MORI DMU50 machining center is a good example of the types of complex, tight-tolerance parts that have steadily increased the technical sophistication of Advance CNC’s machining capabilities.

But the most unexpected result of moving to five-axis had to do with an attribute that is harder to quantify. Among Advance CNC’s most complex operations that require five-axis machining are several steel components for a product related to medical robotics. This product, which we agreed to not name out of privacy concerns, has been a life-changing tool for many people with debilitating medical issues, including numerous war veterans who have experienced serious injuries overseas.

Machining parts for these devices aligns with Advance CNC’s values as a company. And that factor — believing that you are utilizing your skills to make a positive contribution, or do the right thing — goes a long way toward achieving flow, as Dr. Manning defines it.

But Advance CNC’s success has not been a simple matter of investing in five-axis machining centers and reaping the rewards. There were lessons learned along the way. There were significant expenses the company did not anticipate. And there were core business practices that had to be adjusted. I visited the company earlier this year to learn how it navigated the transition, and how it has used those lessons to grow the business. This all started with a single, basic premise.

Advance CNC’s five-axis investment began in 2014 with a DMG MORI DMU50, followed by another in 2015. Today, the company operates five five-axis machines, including two Makino DA300s (with an Erowa quick-change pallet system), as well as a Brother Speedio 140x2 with turning capabilities. But to be clear, much of the work that the company performs is positional or 3 + 2 machining. Advance CNC has so far only tackled three parts that required true five-axis machining — all for medical robotic components. 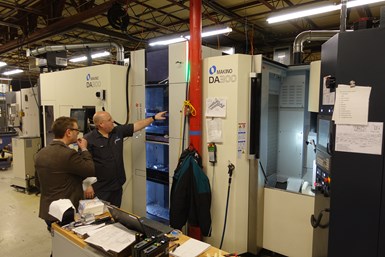 As the lead programmer at Advance CNC, Matt Crowley often decides how to process any given part once the sales order is in-hand. For the robotics parts, the first step is often deciding whether five-axis machining is necessary — the company processes some of the less complex robotics parts on four-axis machines or HMCs — and whether the job will require special tooling. 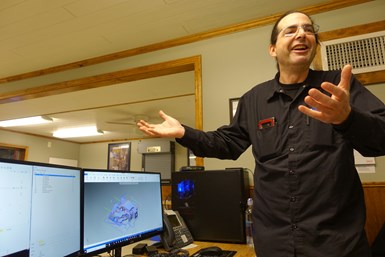 Matt Crowley, Advance CNC’s lead programmer, is often the person who decides how to process any given part once the sales order is in-hand. For medical robotics parts, the first step is often deciding whether five-axis machining is necessary.

Once those decisions are made and the job has been scheduled, Mr. Crowley is often the go-to person who creates the part programs and designs fixtures. He works with the team lead to develop effective setup and workholding strategies all the way through first-article qualification. If the first article makes it through inspection, Mr. Crowley’s role then shifts to ensuring that the operators are hitting the estimated cycle time. “If they make a mistake, we really see it on the production end,” Mr. Dunaway says. “If everybody on first shift is doing their job, you'll see our production numbers are perfect.”

When the numbers aren’t perfect, he says, the problem is typically related to tooling or fixturing — something that has happened less and less since the company began using Raptor dovetail workholding devices for some of the complex, smaller parts. For example, when machining an L-shaped part on 17-4 stainless steel caused kickback within a standard fixture, adding a 0.75-inch dovetail profile to the bottom of the part for installation into a Raptor device provided both sufficient clamping force and access to the part to finish two operations in one setup.

But Mr. Dunaway and Mr. Crowley point to the Makino production cell — the twin DA 300s with an Erowa Robot Compact 80 (ERC80) — as the key to machining families of these robotic parts. Rated for 2-micron repeatability, the ERC80 allows Advance CNC operators to complete small batch runs with minimal setups for (partial) unattended machining.

Other times, however, rather than spending hours experimenting with novel setups, Advance CNC will work with its customers’ engineers to optimize design details. While examining a CAD model, Mr. Crowley will notate areas where a small design change could streamline machining operations. Does this internal corner with a 30-thousandth radius really need to be that sharp? Does it really need to be 1-inch deep? Mr. Crowley says that his customer’s engineers are open to discussing these questions, and even small changes can result in improved part performance and lower costs. Advance CNC uses Mastercam’s high-speed dynamic milling tool paths to utilize the entire flute length of its cutting tools and minimize tool wear. Increasing the feed rate while decreasing the depth of cut, or chip thinning, has also been effective.

Advance CNC has also taken advantage of Mastercam’s high-speed dynamic milling tool paths to utilize the entire flute length of its cutting tools, which minimizes tool wear and achieves better chip evacuation. While the cycle time savings for high-speed tool paths have been good, Mr. Crowley says that the operators were initially wearing out expensive inserts. Increasing the feed rate while decreasing the depth of cut — also known as chip thinning — has helped dramatically. This tactic reduced the cycle time for one robotic component by 10 minutes as well as insert wear.

Advance CNC’s initial investment in five-axis machining was all about opening itself up to the challenge of greater and greater part complexity. The company saw itself as a good fit for jobs that require large purchase orders for multiple, complex parts. But what it soon realized was that these expensive, five-axis machining centers — or more accurately, the parts those machines created — would require equally expensive machines to measure and inspect them. Or, as Mr. Dunaway succinctly puts it, “We had to buy another great machine to check the great machine's work.”

The company has added two Zeiss Contura CMMs since our 2014 article, as well as a Keyence vision system. The CMMs enable the inspectors to compare a machined part to its CAD model at a clip of 200-submicron checkpoints every five seconds. The allowable tolerance for any given part appears onscreen as a red line along the part’s contours. Once the part is scanned, any section that is out of tolerance can easily be detected by comparing the allowable tolerance display against the outlined geometry of the part.

Advance CNC has added two Zeiss Contura CMMs since we last wrote about the shop in 2014. These systems allow the inspectors to scan 200 checkpoints against the CAD model every five seconds.

The investment in CMMs was not the only unexpected consequence of Advance CNC’s efforts toward ever-greater technological capabilities. The company continued to evolve its practices around quoting jobs — a practice that started back when it first invested in HMCs. And it is this distinction — the way that Advance CNC turned the challenge of junk quotes into a net positive for the company — that brings us back to the idea of flow. From machining, to training, to constantly improving ancillary business operations, Advance CNC is exhibiting what psychologists like Dr. Manning would call the “characteristics of a hardy personality.” Those who thrive when faced with external stressors — and achieve flow — perceive challenges as opportunities. They control the course of their actions. And they have a sense of purpose.

Machining parts for medical robotics applications may seem like a small thing to some. But to the team at Advance CNC, it is foundational to how they view themselves. “Being able to manufacture parts to help people is what we’re all about,” Mr. Dunaway says. “We don't always get an opportunity to understand what our parts do and where the end product goes. But in this case, I know where each part is destined to go, and I know exactly how it will eventually help someone. Just to make these things gives you a good feeling — not only of accomplishment, but being able to manufacture tough, critical parts. It’s just a great thing to be a part of.”