What do you do when a large portion of your business depends on machine tools that are more than 30 years old? You roll up your sleeves and perform some of the maintenance of your machines yourself, even if you are the company’s VP, because that maintenance is crucial to the shop’s success.

This is the signature crosshatch design made by Blanchard grinding (rotary surface grinding). The grinding wheel rotates counter to the table’s rotation. Standard feed rates on steel can vary from 0.008 to 0.016 inch per minute. Total stock removal rates of 0.25 to 0.5 inch on steel are common. While the term “Blanchard grinding” has become generic in its use, this workpiece in particular was ground on a name-brand Blanchard machine.

It may seem counterintuitive to run a business focused on precision that depends on machine tools built more than 30 years ago, but that’s exactly what The Kinetic Co. of Greendale, Wisconsin, is successfully doing. Specifically, the company relies on Blanchard grinders made that long ago. Cash Masters, the company’s vice president, doesn’t see this as a risky move. He should know — he is the one overseeing much of the machine maintenance himself.

Disciplined maintenance is key to keeping these machines performing effectively and key to the company’s special niche. By setting a specific maintenance routine that is embedded into each employee’s daily production schedule, doing large overhauls himself, and using the latest grinding wheel technology, Mr. Masters continues to gain productive operation from his company’s oldest investments. 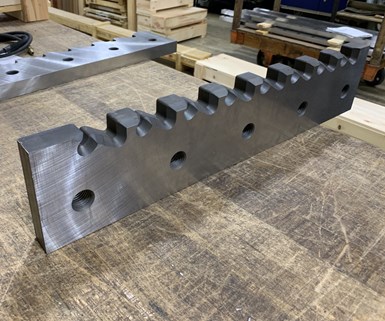 Cash Masters, The Kinetic Co.’s vice president, says industrial knives such as these account for about 85% of the company’s business.

The Kinetic Co. was founded by Mr. Masters’ grandfather in 1948. Today, Mr. Masters and his brother Jared are the third generation to run the company, with Mr. Masters’ son Clayton becoming the fourth generation to work there. Kinetic produces industrial knives for the paper, steel, wood and rubber industries. These knives are not products found in a commercial kitchen, but rather blades used to cut and perforate toilet paper or shear metal barstock, rebar and more. It also makes hardened wear plates. While these product lines account for about 85% of Kinetic’s business, contract manufacturing, mainly in the form of grinding work, accounts for the rest.

What is Blanchard Grinding?

Blanchard grinding is a brand name that has become generic in its use, much like saying Kleenex when referring to facial tissue. What began as a machine developed by the Blanchard Machine Co. in the 1900s is now a moniker generically applied to a number of rotary surface grinding machines including Blanchard, Mattison and others. In 2004, Bourn and Koch Inc. purchased OEM rights to Blanchard and Mattison, building new surface grinders in its facility in Rockford, Illinois, as well as offering retrofit and rebuild services for older equipment. 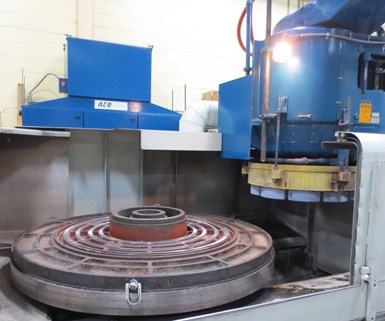 Here you can clearly see the segmented grinding wheel, which is lowered facedown into the workpiece during Blanchard grinding. Photo: Cash Masters

Rotary surface grinding works like this: A large workpiece is held on a rotary table with a magnetic chuck if the workpiece is ferrous or with custom fixturing if it is not. The machine’s table spins the workpiece under a vertical grinding spindle, and a segmented grinding wheel is lowered face-down into the workpiece, contacting the surface in much the same way as a floor polisher or a street sweeper. The grinding wheel spins counter to the table’s rotation, leaving Blanchard’s signature crosshatch pattern. Total stock removal rates of 0.25 to 0.5 inch on steel are common, Mr. Masters says. The Mattison surface grinders in his shop will hold flatness and parallelism within 0.0005 inch, he notes. Standard Blanchard machines will hold flatness and parallelism within 0.005 inch, but The Kinetic Co. can hold those tolerances to 0.002 inch, he says.

“Kinetic is a Mattison museum!” Mr. Masters proudly proclaims. Except that in this “museum,” the machines are working every day. The shop has eight Mattison surface grinders, two Mattison vertical spindle reciprocating table grinders, three Mattison rotary (Blanchard-style) machines and two Blanchard rotary surface grinders. All were built between 1967 and 1993. The company also has CNC lathes and milling machines, saws, EDMs, a laser, heat-treating equipment and other grinding equipment on its shop floor. Originally, the grinding machines were used for industrial knives and wear plates, but in recent years, they’ve been asked to do more. In fact, Kinetic’s﻿ largest potential for business growth is contract machining opportunities for its Blanchard grinders.

“The number of shops that do strictly grinding work are becoming less and less because today’s CNC machines are getting more and more precise,” Mr. Masters says. “Grinding operations simply are being eliminated.” Lower demand leaves grinding shops lowering their prices. “In effect, they are charging what they charged 20 years ago, making it impossible to invest back in their machines.”

Kinetic has skirted this issue because it has already made that investment. Though its machines are old, they are well maintained and can take on modern work. Tackling contract grinding is a relatively recent development for the company, but today, it represents 40% of the Blanchard grinders’ work.

There was once a time when Kinetic didn’t put as much emphasis on preventive maintenance. “This led to machines being abused, and they didn’t work anymore,” Mr. Masters says. Starting in 1995, he began sending machines out to be rebuilt — a process that could take 30 weeks or more. The first machine he sent out was a 42-inch Mattison rotary that was about 16 years old and in very poor condition. At that point, it became clear to him that regular, specified maintenance schedules and tasks were just as important as the “I’ve got to keep grinding” mindset.

“Taking the time to perform vital tasks instead of rushing back into production keeps me from having to take the machines down for extended periods of time,” he says. 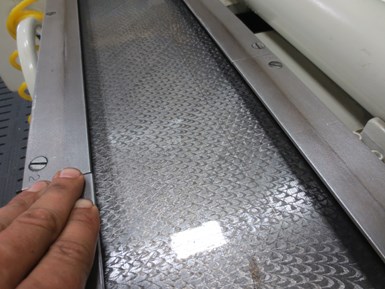 Over time, Mr. Masters began to take on more of the machine maintenance himself. Here, he explains the importance of scraping and the special pattern it creates, which enables pockets of oil to be retained in order to help two surfaces slide past one another instead of sticking together. Photo: Cash Masters

Instead of relying solely on outside service technicians to keep his machines running at optimal performance, Mr. Masters led the charge. Recognizing the value to the company’s business, he began to learn how to do more and more of the maintenance himself, even taking a hand-scraping class at Bourn and Koch. Since that time, five of the machines have been completely rebuilt internally and two others have gone through extreme retrofits. Now, when a machine needs to be taken down, Mr. Masters is a part of it.

It may seem simple, but the biggest secret he has to keeping his old machines well maintained is to clean them daily. Every employee must take 10 minutes at the end of the day to clean their work area and wipe down their machines. For employees who have worked elsewhere, Mr. Masters says this is often one of the biggest training obstacles because it isn’t always a requirement at other shops with similar equipment.

Each machine operator is responsible for daily maintenance tasks such as keeping the machines clean. Regular maintenance is key to keeping older machines running properly.

Another reason why Kinetic is able to keep its older machines performing to today’s standards is that scheduled maintenance tasks are embedded into SyteLine, the company’s ERP system. These tasks, which are scheduled at daily, weekly and monthly intervals, appear as regular jobs that employees must check into. Monitoring guarding to ensure wheel grit doesn’t intrude into the spindles and ways and monitoring oil level and pressure — and ensuring the use of the right oil for the machine — are examples of some of the basic maintenance tasks. Mr. Masters references each machine’s manual for important tasks more particular to each machine, and adds any others he thinks are necessary given the age of the machine and his experience with it.

Kinetic has also invested in central air conditioning and heating to keep the shop at a constant temperature. Among other things, this helps control the harmful effects of humidity.

You could say the shop’s﻿ Blanchard grinders are performing as well as when they were new. But actually they’re performing better. Grinding wheel technology has advanced considerably since these machines were made, and Kinetic’s well-maintained machines provide an effective platform for realizing the full promise of advanced abrasives. Because of careful attention to preventive maintenance and modern wheel technology, the machines today are grinding better than they ever have.