The camera on this VMC combined with a tablet-like control helps speed and simplify on-machine probing routines during new job setups. 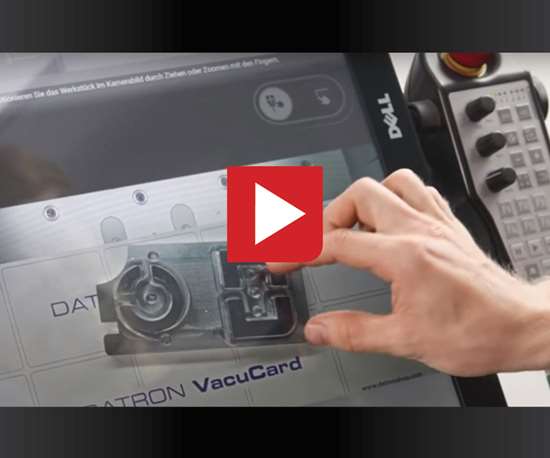 On-machine probing can reduce setup time by establishing the true location of a workpiece fixtured on a table, which then enables the CNC to shift the coordinate system to compensate. The Neo CNC milling machine from Datron Dynamics features a touch probe as a standard feature for that reason. That said, it also includes a camera mounted on the spindle housing that, when combined with the machine’s large “Next” tablet-like control, further simplifies setups for new jobs.

The video above demonstrates this. After mounting a part on the machine’s table, you’d use touchscreen pinching and swiping gestures just like you would on a smartphone or tablet to zoom in on the part. Then, you’d draw a rough outline around the perimeter of the part, and the control will snap those lines to the actual part edges. Finally, icons for where the probe should approach and touch off the part can be dragged into position, and the touch-probing cycle can begin.

The camera is also helpful in machining printed circuit boards in that it can automatically recognize a circuit board’s fiducial marks, which provide common measurable points for the assembly process (this wouldn’t be possible with a touch probe). That way, users can quickly register a part for milling or rework. Locating two fiducials determines a part’s rotation about its zero point, which enables an accurate and repeatable setup process.

The compact Neo machine occupies 32 by 51 inches of floor space and is designed for R&D, rapid prototyping and short-run production, and 3D engraving of small parts in aluminum and plastics. It offers a 40,000-rpm spindle and 24-station automatic tool changer.